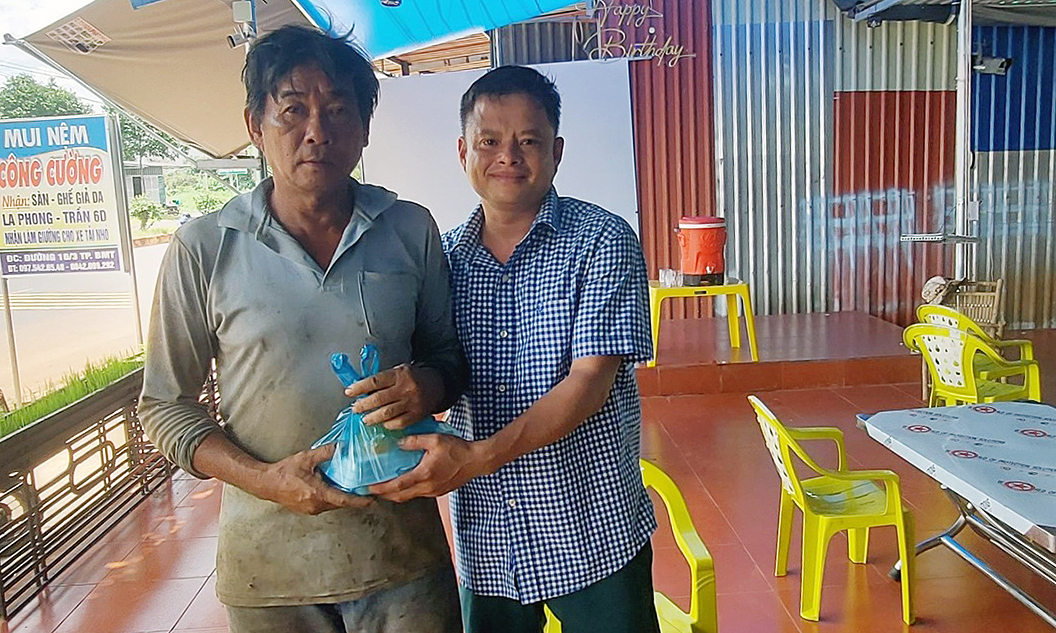 For nearly two months now, the familiar route of Mr. Le Hung Duong (32 years old) is at 11 a.m., after working hours, he rushes home to the kitchen to start a fire while cooking food while two friends and some volunteers. chair cleaner.

“They usually start work from dawn, help me go to the market, prepare ingredients. I just come back to cook,” said the captain of the Buon Ma Thuot City Traffic Police.

After 30 minutes, he finished cooking the dishes and arranged them in a heated tray, ready to welcome guests. Every day, 70 servings of rice a day of “Rice for 0 VND love” always run out after just over an hour.

Duong’s small restaurant located on 10/3 street (Tan Loi ward) has only a few sets of tables and chairs, simple signs, open from 11:30 a.m. to 2 p.m. from Thursday to Sunday every week.

He said, about 7 months ago, one day while eating noodles in front of his house, a lottery ticket seller ran by and asked: Is there any money? Please give me a few dozen meals.” Duong took out 200,000 VND from his pocket and gave it to him. His intention to open a restaurant with 0 VND rice to support poor workers, the needy, and the poor came from that day.

A few days later, he spent all day searching to find an empty lot on the outskirts of Buon Ma Thuot city, about 60 square meters wide. Initially, the landowner rented the land for 5 million VND a month. Seeing that the price was too high, he presented the purpose of renting to open a restaurant with 0 dong, this person immediately reduced the price to 2 million, the lease term was 5 years.

Having land, Duong and two friends embarked on opening a restaurant. With little money, they have to do everything by themselves, from making the foundation, mixing the glue, shooting corrugated iron, cutting iron, welding… After three months of construction, Duong had to stop because of lack of funds. He and his friends went to work as a porter, cleaning the house to have more capital to open a shop.

On August 19, a rice restaurant with 0 dong was also established with a capital of nearly 200 million dong. “I’m not sure how long I will maintain the restaurant. But as long as I have strength, then I will still try,” Le Hung Duong said.

He said that to maintain the operation of the shop, he has to spend about 20 million VND per month. However, in the past time, he has been helped by friends to go to the market and cook rice. In addition, many aunts and uncles in the area who knew about it also brought vegetables, roots and rice to support him, helping him to reduce costs and have more conditions to serve people.

Ms. Le Thi Thuy Hang, 38 years old, living in Buon Ma Thuot city said that she was very surprised when she saw the image of a traffic policeman standing in the kitchen cooking rice to help people in need.

On the opening day, Ms. Hang brought some vegetables to the shop to contribute. She clearly remembers Duong’s happy smile when receiving clean vegetables. “I offered to contribute money, but Duong refused. He said, giving money doesn’t know what to do to receive clean food is precious.” It was those words that touched me and made me feel that this person had a really tolerant heart,” Hang said.

Father and son Nguyen Hau, a blind person selling lottery tickets are regular customers of the shop. “Since the day I heard about the lunch shop, my father and I took advantage of our time to eat. Selling lottery tickets is not much profit, getting a free meal helps me save 20,000-30,000 VND every afternoon. This money I can can cover other things,” Hau shared.

According to Hung Duong, the restaurant is the place where he sends his love with the motto “giving is forever”. Although free, he is always very careful about food hygiene. Tables and chairs are neatly arranged, disinfecting spray, diverse dishes and attentive service. “Giving is not equal to giving,” he said.

On rainy days, seeing that many people could not go to the restaurant, Duong and other volunteers waded through the mud to bring rice to the house for disabled and elderly people living far away. He said, there was a time when the car broke down in the middle of the road, and the two brothers had to walk a few kilometers in the rain to go home.

“Sometimes when I see uncles and aunts come to eat, I can’t help but see them suffering. They say that after eating, they say it’s delicious, and all of the fatigue will melt away,” Duong said with a laugh.

About a month ago, a worker came to eat. After eating, he walked over to the checkout, Duong raised his hand to signal his refusal. At 2pm, when the shop was empty, the man was still sitting there. “He told me to wait for my assistant to clean up so I wouldn’t be embarrassed. Later, he became a regular customer of my shop,” he said.

Mr. Le Van Son, Duong’s close friend, said that when he heard him talk about opening a 0-dong rice restaurant, he was afraid that you would work hard, so he advised to stop. However, seeing you working day and night to build the foundation, cut iron, he also rushed in to help and accompany until now.

Duong said, sometimes he also feels exhausted because some days he can only sleep for 2-3 hours. But thinking that there are many difficult people out there who need his meal of 0 dong, he continued to try.

“I’m not rich, I just know that a few torn leaves cover a lot of torn leaves,” he confided.