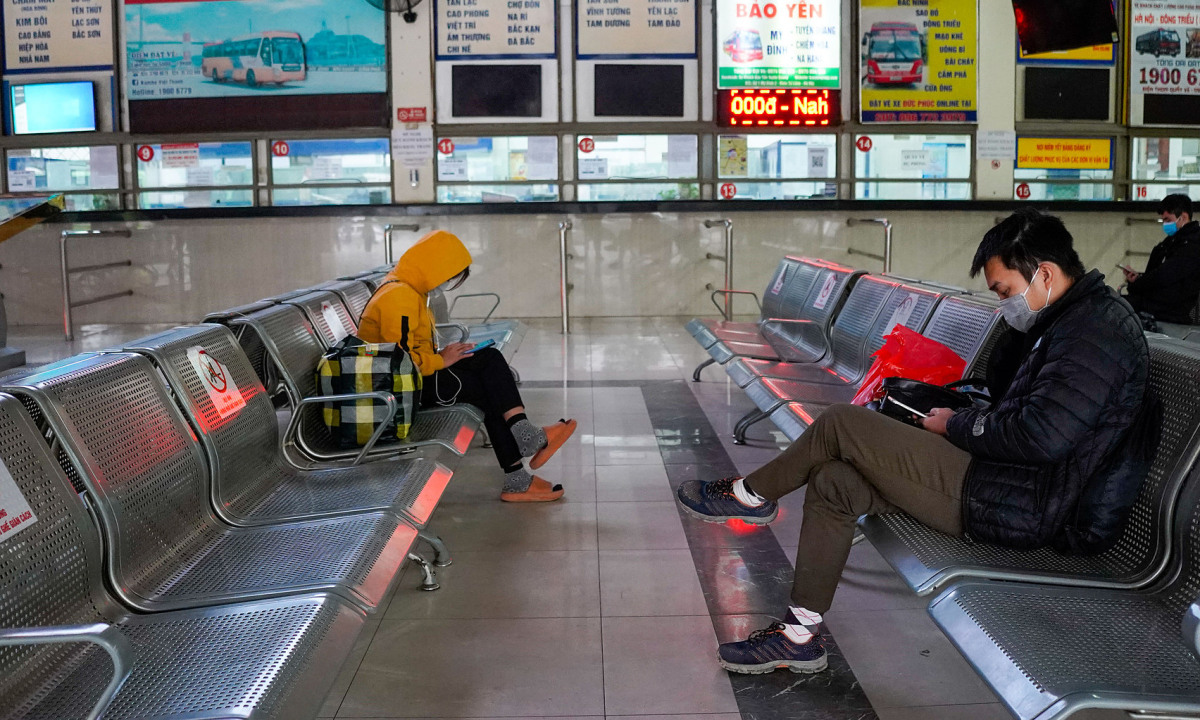 At this time last year, the 25-year-old girl was busy planning to buy ao dai, cut her hair, get her nails done… to welcome Tet, this year, Linh just hangs around her house in Bach Dang ward, Hoan Kiem district (Hanoi). ).

Linh has been unemployed for half a year. The marketing company she has worked with since graduating from college has been inefficient, and has been affected by the epidemic, so it has cut staff. Since then, Linh has not found a new job, partly because she could not find a suitable place, partly because she was discouraged.

Feeling depressed, savings are decreasing day by day, Linh is no longer interested in buying anything for Tet. “I also determined that I couldn’t go out of the house, so I didn’t buy anything. I only set aside two million dong to give to my parents, all,” Linh said.

Although he still has a job, Ngo Duy Anh is like “sitting on the fire” because this year is likely to be the first year since he started working that he can’t buy Tet gifts for his family.

A turbulent year because of the pandemic caused Duy Anh to change jobs four times because companies owe salaries. The Hai Phong native who has just joined a new company since December 2021 also only pays employees half a month’s salary for the reason of “accompanying the company during the epidemic season”.

With an income of less than 5 million dong, Duy Anh “eats all that month” because the rent in Hanoi alone is 3.5 million dong. However, his family has a rule that children who go to work far away must buy gifts for their uncles on both sides, a total of 10 people. Duy Anh has considered the option of borrowing from friends, but around him, everyone has difficulties.

“If you don’t buy gifts, you will be talked about, but if you buy less, you will be compared. Never before, I hate Tet so much”, Duy Anh confided.

Covid-19 has changed every aspect of life, including Tet. According to the survey Expectations of Vietnamese people on the occasion of Tet 2022 of the market research company Q&me conducted in November 2021, finance was the biggest concern, appearing in 64% of participants. Besides, nearly 50% tend to save money more than in previous years. This is due to the impact of the epidemic on the job market.

Perhaps Duy Anh is not an isolated case because in the survey Tet Insight 2022 (made by Adtima), 33% of Vietnamese confirmed that they are uncomfortable with spending too much during Tet and 17% are afraid that they will not be able to prepare a Tet like every year.

Due to the pandemic, reunion on Tet holiday is no longer a natural and easy thing. Doan Thanh Huong’s family in Thanh Hoa is an example. Only 200 meters from her grandmother’s house, Huong cannot return to meet her mother because she is in isolation after coming into contact with an F0 on the bus from Hanoi to Thanh Hoa.

“My mother remembers, asking to watch from afar, but I had to send her back because it was not safe for her,” the 30-year-old woman said.

Huong’s four other sisters also fell into a similar situation. Married around the village, a few steps apart, but no one dares to go to anyone’s house because they are all F1.

“If before Tet, we plan to make jam, dry food for Tet and prepare uniforms for the family, then this year we just hope to be full. I don’t know if it can be done,” worried Ms. Huong.

Overcoming the “family” factor, “health” becomes the top concern of Vietnamese people during Tet 2022. According to a Q&me report, 81% of Vietnamese people choose “health” as their top priority. The “family” factor, which was very interested in the previous Tet holidays, now ranks second with 71%. Adults 25 years of age and older tend to be concerned that a family member may be infected with Covid-19.

In Ho Chi Minh City, Cao Y Linh celebrated Tet alone for the first time. In previous years, female reporters born in 1993 all returned to Hanoi to gather with relatives, but this year, she decided to wait for the epidemic situation to ease before returning.

“My mother has a background disease, and I am also afraid of contracting Covid-19 because of my poor health,” Linh explained.

To relieve sadness, Linh planned to celebrate Tet alone. She plans to go out in the city, experience new services such as public bicycles, night river buses. “If you don’t go home, you can also save money for lucky money and gifts,” the female reporter comforted herself.

There are also people who find ways to go home because after a year of the epidemic, they realize that family is the most important, like Pham Thuy Huyen, an international student from France who returned to Hanoi last year.

Too homesick after four years away from home, again hearing that someone in her family has Covid-19 so Huyen decided to pause her plans to study further to be with her family. “Many people advise me to stay in France to finish my studies and then return to one body, but for me, studying is not as important as going home to hug my mother,” said the 33-year-old female PhD student. Through social networks, Huyen knew that some international students could not go home to see their loved ones one last time. “I don’t want to be like that,” she confided.

“Covid-19 makes us return to our original values. When we realize that life is finite, people will review the things around them, the closest thing is their family,” said psychologist Dr. Nguyen Do Hong Nhung, lecturer. analyzed by a member of Thai Nguyen University of Pedagogy.

Currently, Huyen and her mother are preparing to shop for Tet while continuing to study her thesis. She has asked the professor to guide the remote security, it is expected to be completed by July next year. Next week, Huyen also held a wedding with her lover of 10 years. “This year’s Tet will be the most memorable ever,” Huyen said.

Taking pictures of his parents, he “feels very happy” and realizes that everyone has aged a lot. “Wrinkles have appeared ever since, but I’ve been so caught up in work that I didn’t notice,” the photographer explained.

This year’s Tet photos will be combined with 5,000 photos taken in four months to avoid becoming a valuable asset of Mr. Tai. “They remind us that family will protect and surround us, no matter what,” the male photographer said.