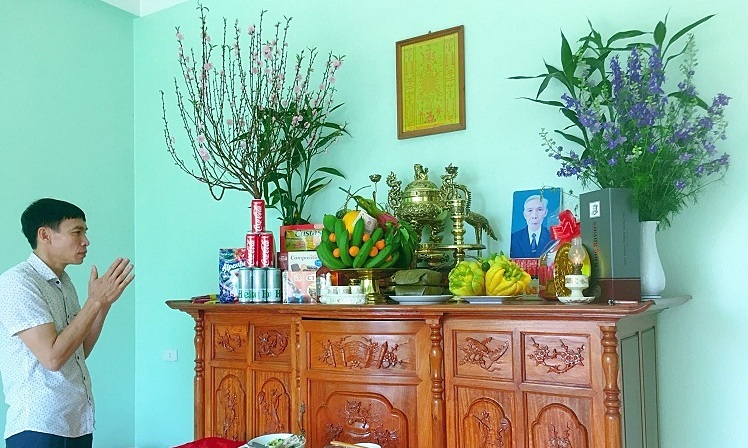 Hai DuongPutting the year-end worshiping tray on the altar, Nguyen Dong instinctively realized there was nothing to do. By this time last year, he “ran out of breath”.

In addition to working at a motor vehicle registration center, Dong also owns a lemon tea shop near Mat Son Lake – a place often held by Chi Linh City to fire fireworks on New Year’s Eve. The beverage bar with a capacity of nearly 100 people is usually open until almost midnight. Winter expects, Tet will give good income like summer.

On January 26, when it was cold, the shop still had more than 20 customers. The next day, the whole neighborhood in Sao Do ward, one kilometer from Poyun Company, was rumbling with “translation” news. From the street to the lemon tea shop is empty. On the morning of January 28, Mr. Dong hung up the signboard to close the shop, before the blockade of all Chi Linh City was issued.

“Every few minutes, I hear the ambulance siren to take the infected person and the F1s to quarantine. Everyone’s mood is gloomy,” Dong said. The family of seven worried about the spread of the epidemic, worried that the second son could not return to Tet and did not worry about lack of necessities. “Last time, we also quarantined, so we know, the officers still let them go to the market”, Dong’s mother told her son. She put on a mask, went to the market to buy a oats of rice and then returned.

In isolation during the Lunar New Year, Dong’s family, like other Chi Linh people, still tried to make a full Tet holiday. In previous years, Dong wrapped banh chung twice. The first time is on December 23rd, the second time on the 28th of Tet, each time 20 cakes. Eat a little, but every year he goes around to give his paternal relatives. This year, after a few hesitations, they wrapped 10 cakes.

“Last New Year bought peaches, kumquats, each tree is more than a million. This year there are also, but smaller,” Dong laughed. His family is not in a quarantine, but has no intention of going to anyone’s home other than the house of his grandmother and grandparents.

A few days ago, his parents gathered some pistachios and candies and sent them to their freshman son at a defense academy who could not return home. The grandparents were calm after the first day of the outbreak, but rarely laughed because they had to leave their son for the first time on Tet.

On Tet 29, the market near the East House reopened for people to shop for Tet, with guaranteed gap. Buyers who sell, just fall the price, deliver the money and then take the basket out.

On the 30th of last year, Dong ended the year with his friends and brought the whole family to his grandmother’s house for a meal. Large family of more than 20 people take care of cleaning the altar. Chicken man, tray maker, dishwasher.

At 9 o’clock at night, Dong and his three employees “ran without strength and breath”. The people of Chi Linh poured into the lake of Mat Son to play, waiting to watch the fireworks as crowded. The lemon tea shop near the lake is of course very popular. You have to mobilize more mother and brother to help you.

The small street has 20 intimate families like flesh. After the moment of New Year’s Eve, they went to each other’s house to celebrate Tet. Three days of spring, winter and friends with endless gatherings. People everywhere flock to Con Son – Kiep Bac, more than 6 km from Red Star. Busy streets like in the capital.

This year, sitting indoors, Dong can sometimes hear a motorbike passing through the door. “Three days of Tet, spoiled for hugging my daughter to sleep,” said the young father.

At 9 p.m. on the 30th of the New Year, Mr. Pham Xuan Truong, wearing protective clothing, a pair of rubber gloves and a face covered with 2 layers of mask, left the store and went home.. On the street sparsely crossed, the space was quiet.

Truong walked home 40 meters away. At this time, his wife is preparing chicken for New Year’s Eve. Seeing her husband, the wife dodged another corner. He quickly stripped off his mask and gloves to throw the trash away, then walked into the bathroom, turned on the hot water, and took off his protective clothing and washed it.

For this 40-year-old man, the suit is a “amulet” so that he can continue to practice phone repair at the heart of Chi Linh translation. “I was going to take a few breaks, but my relatives needed it so I had to try,” he said.

On the morning of the 30th Tet, his wife ran to the market to buy a few pounds of rolls and some vegetables to prepare a tray for the year-end offerings. Banh chung, chicken was sent by grandparents a few days ago. “Never went to the Tet market in such a hurry,” she said. Tonight, instead of going to their grandparents’ house to welcome New Year’s Eve like every year, the couple set up a family altar to worship themselves.

Received the news of the city blockade on January 28, this man immediately bought two protective clothing, gloves and a mask, and posted the message: “Guests come to put their phones on the thermostat in front of the door” . This machine is homemade from a glass separator, always turned on 90 degrees Celsius. When it reaches the hands of the technician, the client phone is also passed through the UV projector for 2 minutes, sprayed with disinfectant water.

From the day the city was “closed”, anyone who brought the device to the school was free of charge. On the 30th of Tet every year, his shop is crowded and works until 23:00. But this year, I’m afraid that my wife and daughter are sad at home alone, so they only accept guests until 9pm.

The younger brother is concentrated in a factory in the city, the youngest brother’s family in Quang Ninh is unable to return. The night of 30 was originally the occasion of the family gathering, now everyone stays there. Chi Linh’s New Year’s Eve was cold. Presenting the worshiping tray to the South, where the parents’ house, Truong lit incense, his mouth murmured and prayed.

In previous years, this was the time when the family of more than 10 members counted down to welcome the new year. But this year, it is not known when they will meet. The school turned on the phone to call their parents, on the other side, two smiling grandparents said happy new year, breaking the gloomy atmosphere. They make an appointment on the 6th of the Lunar New Year when the blockade ends, they will reunite.

“We spent two of the biggest chickens in the garden for that day,” his mother said, pointing outward. Outside the yard, the peach trees planted last year were fitted with sparkling lights. Back from the phone his favorite spring song.