(Sports news, Tennis news) Tennis news April 13-19: Roger Federer has confirmed with certainty that he will attend Roland Garros this year but he will make adjustments to the clay tournament he will compete against. This Grand Slam. Meanwhile, Rafael Nadal has the opportunity to “collect debt” Stefanos Tsitsipas in his home country of Spain.

Federer changed his schedule for re-export, pledging not to leave Roland Garros

Recently, Roger Federer announced on his personal Twitter page that he will attend the ATP 250 tournament on clay courts in his home town of Switzerland Geneva Open (May 16-22) just over a week before coming to Paris to compete. at Roland Garros (May 30 – June 13).

Instead of attending the Madrid Open or the Rome Masters, Federer just attended the Geneva Open to run momentum for Roland Garros

Federer recently tweeted confirming his upcoming clay season change: “It is a pleasure to inform you that I will be playing in Geneva and Paris. Until then I will use my time to practice. I really want to play in Switzerland again ”.

Nadal arrived in Barcelona early, waiting for the revenge against Tsitsipas

After being eliminated early in the quarter-finals of the Monte Carlo Masters by Andrey Rublev, Rafael Nadal has just flown from Monaco to Barcelona (Spain) to practice preparing for the ATP 500 on Barcelona Open clay ground (19-25 / 4). Rafael Nadal trains passionately to prepare for the Barcelona Open

In this tournament, Nadal is exempt from round 1 and can meet Ilya Ivashka or Tallon Griekspoor in the opening match in round 2. After that, “Gaur” has the ability to play Kei Nishikori, Guido Pella or Cristian Garin in round 3.

If he reunites with Tsitsipas, Nadal will have the opportunity to “collect debt” after losing to his juniors from Greece 6-3, 6-2, 6-7 (4), 4-6, 5-7 in the quarterfinals. Australian Open this year. 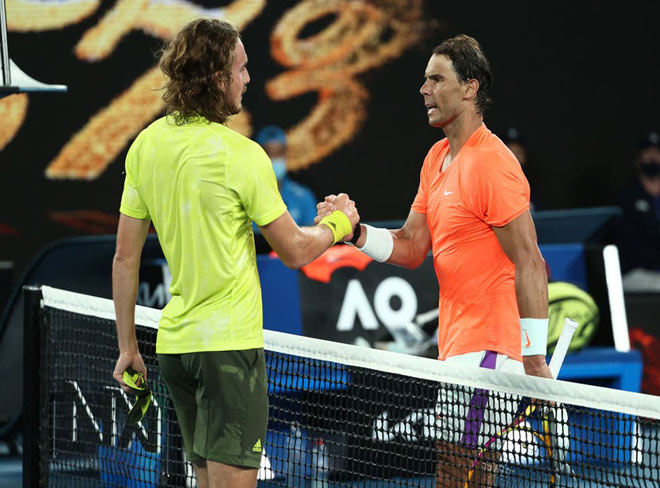 Video Rafael Nadal training to prepare for the Barcelona Open 2021:

Losing to Daniel Evans in the third round of Monte Carlo, Novak Djokovic will compete at the ATP 250 Serbian Open (April 19-25) in his hometown of Belgrade, Serbia. This is a tournament where the number 1 male player in the world is also one of the organizers. Recently, however, Dominic Thiem and Gael Monfils unexpectedly withdrew from the Serbian Open at the last minute.

Djokovic as one of the top 4 seeds of this tournament will be exempt from round 1. In round 2, Nole will meet the winner of the match between Kwon Soon Woo or a player who passed the qualifiers.

In the quarterfinals, Djokovic can face Laslo Djere, Juan Ignacio Londero, No. 8 seed Miomir Kecmanovic or another player who has to go through qualifying.

Djokovic’s potential opponents in the semifinals and finals could be No. 3 seed Aslan Karatsev and No. 2 seed Matteo Berrettini. Tsitsipas championship in Monte Carlo “golden footsteps” of his mother

At the final of the Monte Carlo Masters last night (April 18, Vietnam time), Stefanos Tsitsipas convincingly won Andrey Rublev in 2 sets with a score of 6-3 after only 1 hour and 12 minutes of playing to win the title. The first ATP Masters 1000 career.

In particular, Tsitsipas is not the first member of his family to win the clay tournament at the Monte-Carlo Country Club. His mother, Julia Salnikova, won the title for young tennis players at the venue in 1981. Three years after retiring from his career as a tennis player, Italian star Francisca Schiavone has just announced his return to the world of tennis. The former 2010 French Open Women’s Singles Champion will coach 30-year-old Croatian Petra Martic (ranked 21st in the world).

Schiavone was once suffering from lymphoma, but then she successfully won against the disease to return to professional tennis.