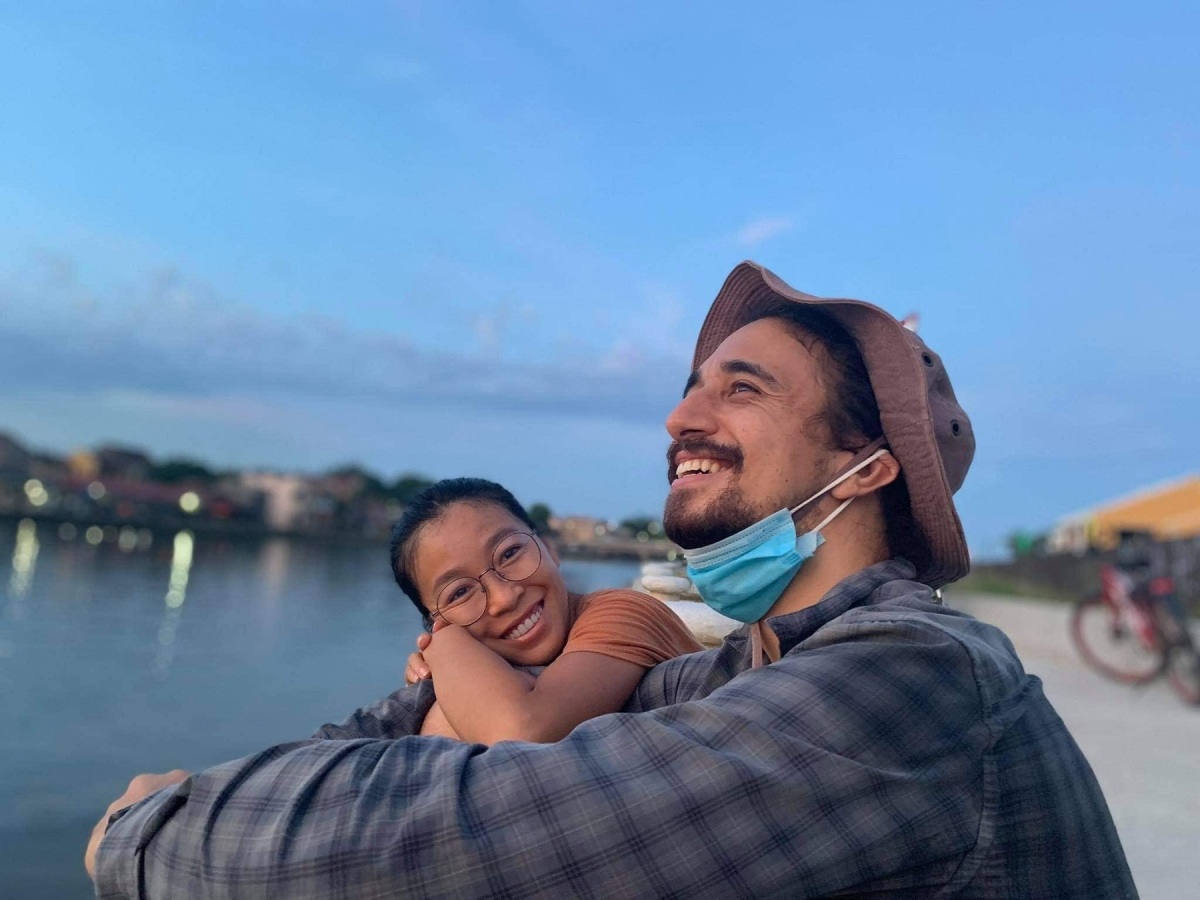 Quang NamBefore meeting Jonathan in 2015, Thanh Van was a single mother, had an unstable job, was being treated for depression due to being away from her child, and her biological mother was seriously ill.

At that time, Nguyen Thanh Van (32 years old) had just quit her job as a pharmacist in Hanoi because her health could not meet the long trips. Having not graduated, married, at this time the girl from Mu Cang Chai (Yen Bai) has no degree, so finding a new job is extremely difficult.

Being introduced to freelance work by a friend, she was happy as if she had caught gold, but the job required knowing how to communicate in English. Without money to go to school, Van went online to self-study.

At the same time, the Australian, Jonathan Poltak Samosir (31 years old), a technology engineer, came to Hanoi at the invitation of a friend. Jonathan came to teach English at a center in Cau Giay. Because he loves languages, he decided to learn more Vietnamese, so he posted on social networks: “I want to learn Vietnamese. Can you help me?”.

Reading the news, Thanh Van was overjoyed, thinking that learning English is free. “I will teach you Vietnamese for free, and you will teach me English for free,” she texted him. A few days later, they arranged to meet at a coffee shop. For many people it was just an ordinary meeting, but for Van it was an arrangement of fate.

Van’s first impression of Jonathan was the student’s face, long flowing hair and the scent of perfume. “It’s the smell of wood. It reminds me of the days when I was a child with my mother going to the forest to collect firewood. The trees that were cut down always had a very special smell. The scent on Jonathan’s body was like the smell of all the woods mixed together.” , Thanh Van said.

Jonathan was stunned by the appearance of the girl standing in front of him. “I didn’t expect her to be so cute outside. Wearing a white shirt, black flared skirt and sneakers like a student. Van’s eyes were black, and her mouth was always smiling,” recalls Jonathan.

The guy talked non-stop in English without knowing that Thanh Van didn’t understand anything, just sat and laughed. Then, she boldly opened Google translate, letting Jonathan know the truth. The two burst into laughter, and began a two-way, telephone conversation. They introduced each other about the place they were born, the reason for learning the new language. Van taught him a few simple Vietnamese sentences.

This meeting is the beginning of coffee and movie watching sessions of kangaroo boys and Vietnamese girls. Love a foreign guy one year younger, but Thanh Van thinks she is not worthy. As a single mother, with a 6-year-old son, she always put up a wall, keeping her distance when he stood close to her. “I’m afraid of falling in love, I’ll be in a lot of pain when he turns away,” Van said. And Jonathan said, from the first time he met, he was “drunk”.

During a trip to Moc Chau at the beginning of 2016, Jonathan whispered in Thanh Van’s ear, “I love you!”. The girl just smiled, didn’t answer, hurried away, leaving the boy to follow.

During a charity trip to Muong Te (Lai Chau) half a month later, Thanh Van told Jonathan everything about his life. “I was born without a father, my mother raised my three sisters and brothers to study. But before I finished school, I got married. After that, my mother suffered a stroke because of her divorce and was bedridden.” Van said.

Jonathan responded with a hug, then wiped the tears from his beloved’s face. When he saw Van calm down, he said he was also born in an imperfect family, so he understood her.

“You were born into this world already a wonderful thing so don’t allow yourself to get hurt for anyone or anything. You deserve to be happy”, he replied. “The rock in the chest” was removed, Thanh Van removed all the guilt of holding Jonathan’s hand. They officially became a couple that spring.

He asked her: “Do you have anything that you have never done?”. Van said he had never been on a plane, had never eaten pizza or pasta, and had never eaten an ice cream of more than 10,000 VND. That night, back in Hanoi, Jonathan took his girlfriend to a restaurant near West Lake to buy a pizza, equal to half a month’s rent of Van. The next day, they went to eat pasta, eat Korean fish ice cream.

“She is different from all the girls I know. Although she is poor, she never complains about gifts. Instead of going to restaurants together every night, in her free time, she goes to the market to buy things and cook for me food. Viet,” he said, adding that he respects his girlfriend more.

The two planned to book a ticket to visit Jonathan’s parents in Indonesia when his visa expired, but Thanh Van’s mother became seriously ill. He had to go home alone.

The lovers were separated between the days when the girl lost her mother. Jonathan immediately returned to Vietnam. After 49 days of Van’s mother, the two arrived on Koh Chang island, Thailand, fulfilling their promise to let her fly and go abroad. Before that, Jonathan’s plan was to stay in Vietnam for three months and then return to Taiwan to study Chinese again. But because he fell in love with Thanh Van, he was determined to learn Vietnamese to stay. What Thanh Van is happy about is that her son and he are very compatible. Currently, Jonathan can communicate with her 70% in Vietnamese.

The lover moved to Da Nang, he also quit his job. On the days when Van got off work late, the two bought two loaves of bread to Son Tra, gnawing on the cake while watching the lights of the boats at night fishing. Rain or shine, he still regularly took her to work for four years. Since falling in love, Jonathan still wears the same perfume they first met.

In the middle of 2020, the couple completed the marriage procedure and received the blessings of all close people. Ms. Nguyen Thi Hue (32 years old) close friend of Thanh Van said that, when she first met Jonathan, she believed that he would be the person to bring happiness to her friend.

“Jonathan follows Van back to her hometown, does everything she does, eats everything her family eats, lives like highlanders. I see Jonathan always trying to blend into Van’s life, so that there is no distance left.” Hue said.

In the second Covid-19 season, the young couple moved to the coastal town of Hoi An to live. Thanks to her husband’s companion, Thuy Van has the motivation to strive, becoming the owner of a distribution branch of a fashion brand.

This spring, the Vietnamese and Australian couple have many big plans: to hold a wedding after many delays because of the epidemic, and to welcome their son to Hoi An. The two will also visit her husband’s parents in Australia and build a small house to hold hands and watch the sunset on the Thu Bon River every day.