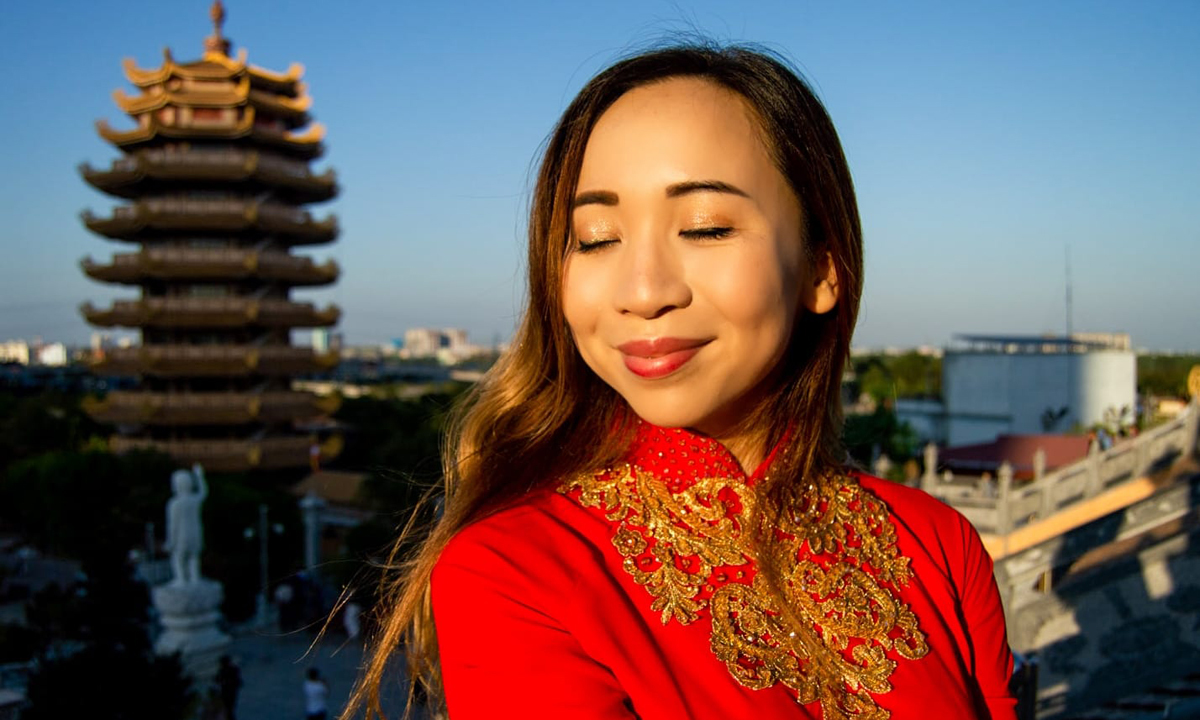 Ho Chi Minh CityFive years ago, Denise was helped by thousands of people to find her biological mother in Vietnam, so today, the businesswoman is on a journey to do many things to “repay” her hometown.

Vietnamese-Swedish girl Tran Thanh Huong, 30, (Denise Sandquist) has an impressive resume. She is fluent in 6 languages, used to be a diplomat working in Moscow. She is also an entrepreneur and boxer. Currently, Denise is the CEO of a dating app development startup, based in Ho Chi Minh City.

The idea of ​​setting up a dating app came to her after finding her mother at Christmas 2016. Before that, Denise had twice returned to Vietnam to find her birth mother in 2013 and 2015 but was unsuccessful. For the third time, her friends helped her share the story online. After only a few days, thousands of people spread the article and many large and small newspapers in Vietnam published the story. Eighteen days after the post, Denise received a phone call, a woman’s voice on the other end: “It’s mom.”

The common blood flow makes the mother and daughter connect strongly with each other. The reunion also made the 25-year-old girl think a lot about how people who belong together find each other, even though they don’t know how or what means to start the connection. “That made me think more about the importance of connections and want to do something to repay the Vietnamese people who help me unconditionally,” Denise shared.

At that time Denise still did not know what to do. She is only sure of one thing that she will come to live and work in Vietnam. When talking with single Vietnamese girlfriends, she realized that many people are under pressure to “choose a husband”, while not being able to trust dating apps. “I want to make an app where women have a safe environment to express themselves, instead of the risks and quickness often found in other apps,” the Vietnamese-born girl shared.

Denise shared this idea with Oscar Xing Luo, a friend, known while co-managing a student project in collaboration between the Stockholm University of Economics and the Royal Swedish Institute of Technology.

Inspired by Denise’s story of finding her mother, Oscar decided to quit her job at iFlytek, a Chinese AI technology company, to go to Vietnam with her to start a business. “She’s a great complement to my own ambition – someone who likes to focus on plans,” said Oscar, who has experience in Computer Science and Artificial Intelligence.

Since deciding to make an app in 2020, Oscar moved to Ho Chi Minh City to focus on production and technical direction. Meanwhile, Denise is responsible for the overall strategy and finance of the company, while still holding the position of head of sales for a large corporation. In May last, during a visit to Sweden, Denise quit her job and devoted herself full time to her company.

For nearly half a year stuck in Europe because of Covid-19, Denise had to wake up before 4am every day to work with staff in Vietnam. But also during this time, the female CEO was able to connect with foreign investors and successfully raised $ 1.6 million.

“It’s a milestone worth celebrating. For almost a year the company has been run with my own capital and Oscar. This money will help us invest in expanding the company,” Denise said.

Launched at this time last year, so far Denise and Oscar’s dating app has more than 800,000 downloads. From a small team with 7 members, it has now grown into a company, creating jobs for more than 30 Vietnamese employees.

Their “brainchild” was born in the context that there are more than 100 dating apps on the market, but they believe they will succeed because the difference of the app is that users have to verify their identity before a profile can be made. approved.

Thereby AI technology (artificial intelligence) will rely on the user’s own taste and personality to make suitable recommendations for customers in the next matches. Just like Netflix will suggest you movies according to your taste, here it also narrows down the search for the person you want to date, instead of “surfing”. Even after becoming a couple, the application still provides an environment for couples to continue to nurture their relationship.

The Vietnamese-born girl thinks that there are many ways to contribute to Vietnam. In the immediate future, with this startup, she will create a connection platform, helping people have more choices and find quality relationships in a safe environment, especially Vietnamese women with disabilities. gain power, growth and affirmation of their true worth.

In addition to developing the company, this female CEO and her colleagues are organizing dozens of skill development programs for students from 15 universities of technology, marketing and communication across the country. A 3-month internship program of Denise company has 100 young people participating.

During the recent outbreak, the company donated 1,000 meals to doctors and patients. Denise is personally a sponsor of the SOS Children’s Village. “You guys are a different version of me but with a much more difficult childhood. I hope a little donation will help them have a somewhat easier life,” she said.

Denise Sandquist was adopted by Swedish parents at the age of three weeks and spent a peaceful childhood with her adopted sister 2 years younger, also of Vietnamese origin. Ever since Denise was young, her Swedish mother told her: “Remember, you still have Vietnamese parents. Because they want you to have a good life, they decided to send you to us.” It is this that makes Denise always proud of her Vietnamese roots.

“I often introduce myself as an adopted child of Vietnamese origin, whether in a professional or intimate environment. I believe this is a very important part of what makes me and says a lot about me as a person. me,” she said.

Returning from Sweden on October 16, Denise is in quarantine and runs the company from a windowless room. However, she is filled with gratitude for her adoptive parents, biological mother and all the friends who have helped her to have a “full” life like today.

“I am also grateful for the journey to find my mother, which changed my life forever,” the girl said.