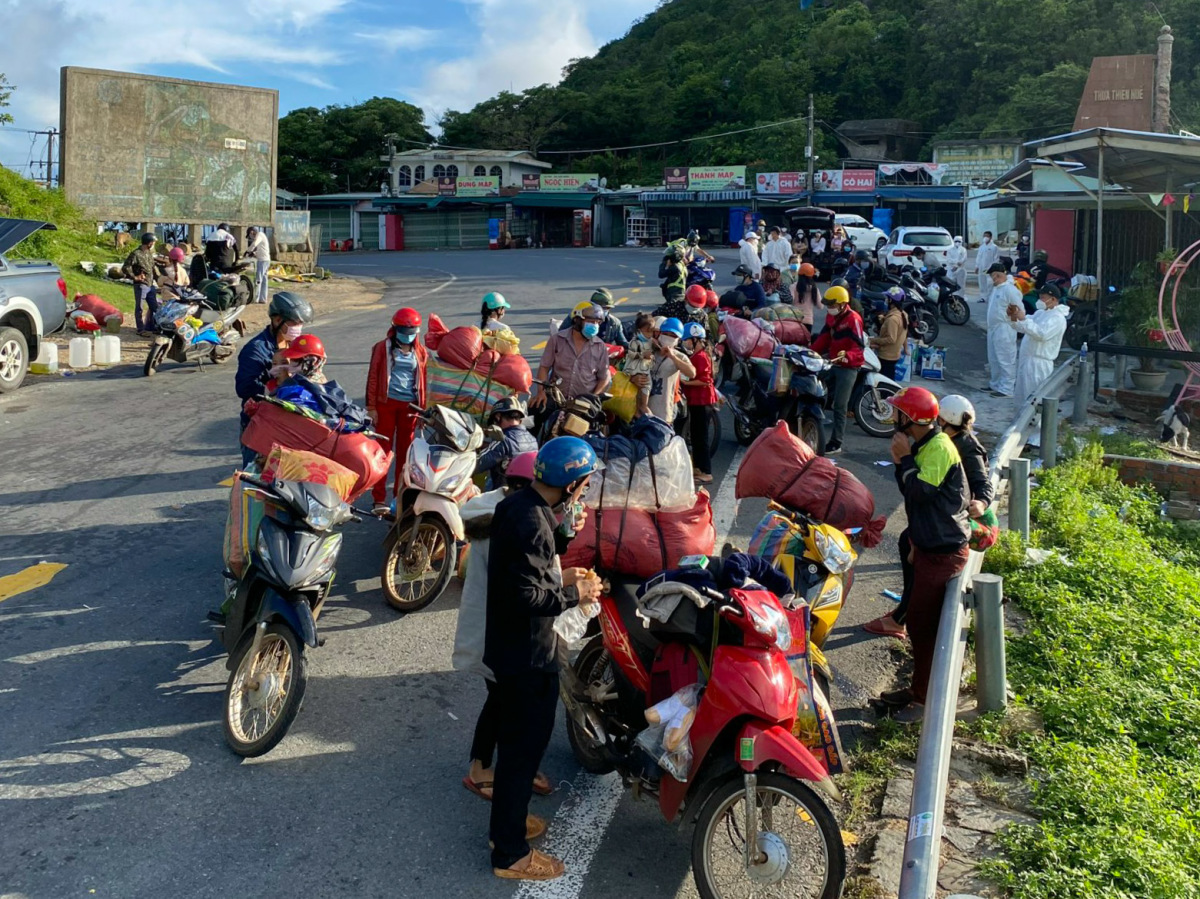 Danang“At 15:00 there was a group of 200 people”, after Truong Vinh Phuc’s message, the group got up and hurriedly prepared meals and fuel, went to Hai Van pass for the second time, on October 3.

These unexpected dispatch messages have been familiar to Phuc’s group for about a week now when groups of people returning to their hometown on motorbikes reappeared. “Those who have just returned now have an austere and emaciated appearance,” said the 48-year-old owner of social enterprise Phuc Van Phuc.

On September 26, knowing that a group of people were on their way to the North, stopping at the top of Hai Van Pass, Mr. Phuc decided to bring some food to support them.

From the center of Da Nang to the top of the pass takes nearly 30 minutes. Fearing that the group would leave first, he called a member of his volunteer group who lived at the foot of the pass to bring water, milk and gasoline first to hold them.

On the empty land of the top of the pass, burgers are laid out on the table for everyone to come and pick up, while Mr. Phuc’s group divides and pours gasoline from large cans into full motorbikes or bottles and cans. they bring.

This first group consisted of 50 ethnic minority people, only one person was fluent in Kinh language. They went to work as hired laborers in Binh Phuoc. After being unemployed for a few months, trying to stay alive until now could not continue, so they returned to their hometown of Nghe An.

“The most painful thing is that the children also follow their parents in the old cars, despite the danger to repatriate,” Phuc said.

From that day, Mr. Phuc’s group started connecting with the epidemic control points in Da Nang to have a group about to cross the Hai Van pass, to report with the group to prepare supplies. However, the time from receiving information, preparing, moving to the top of the pass took at least 45 minutes, so many times when the group reached the place, the group was gone.

Normally, the group only relays people to their hometown on the top of the pass for about 30 minutes and then leaves. But there are groups that go at night, seeing many babies and pregnant women, so the group actively leads them to cross the pass safely, to the territory of Thua Thien Hue province and then back.

These days, Mr. Doan Nhat Tien, 41 years old, a member of the group, has connected with the staff on duty at the checkpoints in Quang Nam to get the information sooner, have more time to prepare the food, bring it to the pass and wait for it. .

Mr. Nguyen Van Hung, head of the epidemic control point in Nui Thanh district, Quang Nam, said that a few months ago the southern provinces strictly followed Directive 16, the situation of people leaving the locality was not much. However, by mid-September, some provinces such as Binh Phuoc, Ba Ria Vung Tau… loosened the distance, the flow of repatriates from the South began to appear more.

On the afternoon of October 2, Mr. Phuc received a message from Quang Nam checkpoint informing that a group of 280 people was stopping in this province to make a medical declaration. It is expected that at 3 am, the group will be at the top of Hai Van pass. Phuc immediately asked a volunteer kitchen to cook hot soup to give to the group. Before that, milk for children and mineral water were always purchased by the group, ready to be supplied at any time.

That night, when they reached the top of the pass, the group discovered that there was no light, the open space was not enough for 280 people, while there were still many container trucks moving through the pass, very dangerous. Phuc decided to pick them up on the other side of the pass, in the area of ​​​​the epidemic control station in Thua Thien Hue province.

The group got caught in the rain on the way, so they were exhausted, and it was almost morning when they arrived. More than half fell behind.

Although he knows it is “stupid”, Phuc often asks people returning home, “Why did you decide to return at this time?”. Most of the answers he received were the same “We don’t have any money, we can’t stay anymore”.

Phuc does not remember how many groups he has supported in the past few days. There were days when they didn’t, but there were days when they had to go up the pass three times. Despite his best efforts, he still felt that the group’s support with relatives “was immeasurable” because the road ahead was too long, many people had to return to Lung Cu, Ha Giang.

“The road is still long, I hope their journey will have more hearts to support,” Phuc shared.