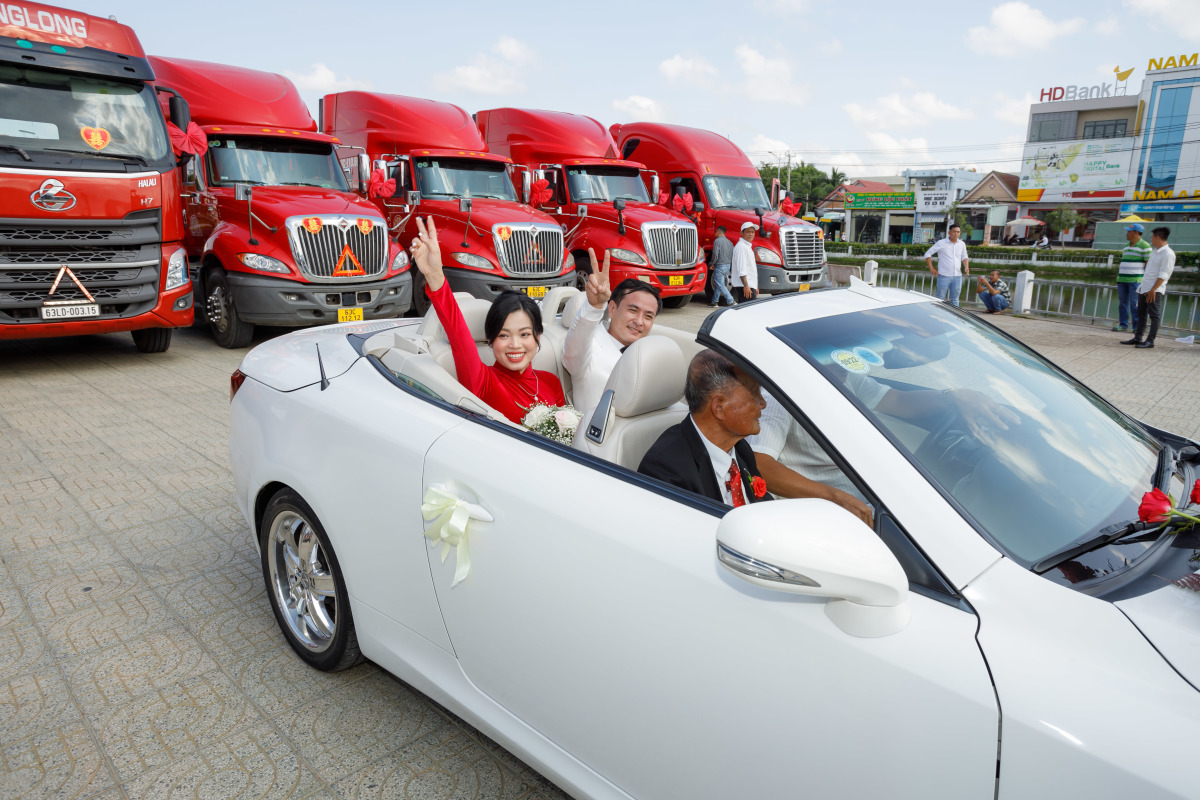 In the past few days, the video recording the wedding scene in the West carrying the bride with a container trailer has caused fever on many social networking sites. The wedding of Mr. Duong Quoc Hung, owner of a vegetable barn in Tra Vinh, with Ms. Ho Thi Anh Thu, 25, owner of an imported fruit shop in Ben Tre.

Mr. Hung said that the idea of ​​​​carrying the bride with a convoy of container tractors was his own idea because he wanted to surprise his wife on a happy day. All 12 container trucks belong to the family’s available fleet because he regularly exports goods to China. His original plan was to use 25 cars, but because some cars are still stuck in China. “The night before the wedding, my staff and I stayed up all night to decorate the bow and paste the word “song hy”,” said Mr. Hung.

On the morning of the wedding day, the groom drove a convertible car ahead, followed by a convoy of container trucks driven by drivers, crossing 80 km from Tra Vinh to Ba Tri district, Ben Tre to welcome the bride. “I told the brothers to run in a vertical line so as not to cause congestion on the highway,” the groom said.

Wherever the procession went, it attracted the attention of the people, many people stood on both sides of the road filming and taking pictures to make the wedding exciting, thanks to that the video went viral online.

Bride Ho Thi Anh Thu shared that before the wedding day, her husband said “I will take a container truck to take you home”, but she thought he was joking, so she did not believe it.

“When the groom’s family arrived, seeing everyone rioting in front of the gate filming and taking pictures, the whole family rushed out and was surprised with 12 brightly decorated container trailers. At that time, I believed that the husband did it.” , Anh Thu said.

She said the wedding day is an unforgettable happy memory in the life of both husband and wife. On the wedding night, when the husband asked “is your wife happy?”, the young wife was still “laughing too hard”. A few days later, every time she went out to the street, the neighbors saw everyone calling to congratulate and praise “what wedding can’t be seen wearing all the gold and only the container truck” makes her feel happy in her heart.

“Actually, taking the bride by car, boat or bicycle, container truck, I still feel happy, the important thing is the love between the two of them and everyone’s joy for me, that’s the precious thing,” Anh Thu confided.

Explaining more about the idea of ​​​​the bride procession, Quoc Hung said that before the wedding, he just thought “how to make his wife laugh a lot, be happy” on the big day, so he decided to “play big”.

The two have been together since 2018 thanks to an arrangement from their parents. Loving each other for a year, Anh Thu went to Ho Chi Minh City to study, because the geographical distance made the two gradually separate and then broke up. However, the groom continued to “plant si” in the countryside waiting for her to return. In 2021, during the peak of the Covid-19 epidemic, Hung, while at home fighting the virus, “opened a campaign to start over” via text message. Gradually, feelings were cultivated, and after three years of separation, the two returned to each other.

“During the time of being apart, I felt empty without you by my side. Thinking about the memories of when I first fell in love, I realized I needed you. Going through difficulties, now we are each other’s, and I thank you. Thank you family for everything,” Anh Thu said.