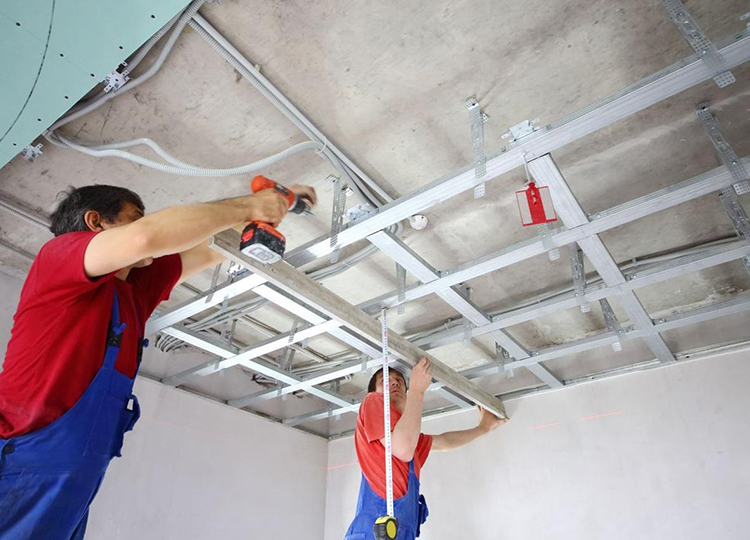 When I built the house, I didn’t do plaster ceiling, but the contractor said because the water pipe goes on the ceiling, I had to make plaster to cover it. Is there a better way for me to just do the concrete ceiling?

In fact, now there are many works to rough and then “turn” the technical systems running on the ceiling as a highlight, but not all homeowners like this style.

According to architect Truong Thanh Trung (Architectural and interior design consulting company T&T), it is not correct for the contractor to ask to close the plaster ceiling because there is a technical pipe system on the ceiling.

In the construction bidding package, the contractor will have to plaster the ceiling if the owner does not want to close the plaster ceiling, this is included in the general construction unit price. This is a part that takes a lot of time and labor.

Currently, the unit price of plastering materials and labor costs are included in the general unit price when the contractor receives the work. Homeowners only lose money for materials including cement and black sand, ranging from 30,000-40,000 VND per m2. Meanwhile, if the ceiling is plastered, the cost is much higher, 150-170,000 VND/m2.

To save costs when not closing plaster ceilings but only concrete ceilingsyou can talk to the structural engineer in advance so that they can best arrange the location of the beams running in the house.

Another note is that the technical system under the ceiling must go neatly and have a careful pipe belt. The ceiling and technical pipes on the ceiling can later be painted in the same color. If the concrete ceiling with formwork is guaranteed, there is no need to plaster the ceiling, but leave it as is and paint the finishing color.

However, when not closing the plaster ceiling, there are also some disadvantages that you need to understand to calculate whether this option is acceptable or not.

– Will reveal beam spans that cross the room.

– The technical pipeline system will be exposed under the ceiling.

– When the toilet’s sewage system is in operation, it is subject to certain noises.

– There is no good sound insulation and noise resistance.

– The wardrobe, kitchen cabinets will cost more because the concrete ceiling is higher than the plaster ceiling.