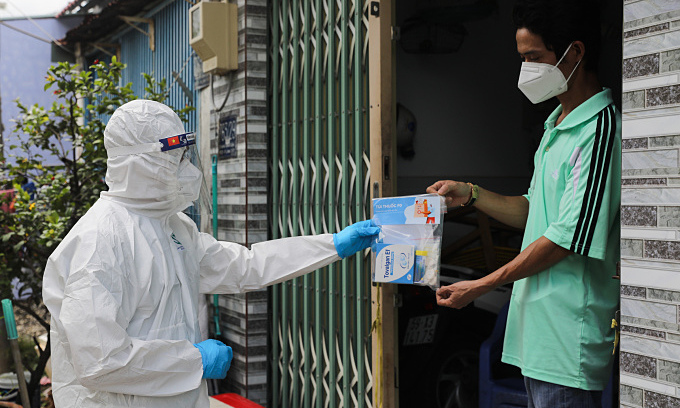 On the morning of January 23, after booking a bus ticket to go home, putting gifts for parents in a box, Nguyen Thu Trang, 23, bought a quick test for Covid-19 and saw two lines.

Seeing the faint line, the girl who took the sample for the first time thought she might be doing it wrong, so she took another stick and dig deeper. The second result is “two tight lines”. “The sky and earth around me seemed to be dark. Being positive means that all the plans that I prepared for this year’s Tet fall at the last minute,” said the girl, who is staying in Dong Da district, Hanoi. .

Two days earlier, Trang felt a sore throat and runny nose but didn’t care because she thought it was because she had just returned from a cold trip. Before getting in the car to go home, she still decided to do a quick test to make sure she didn’t bring the virus back to her family and village.

After a moment of panic, Trang calmed down, started texting people who had been in close contact with her, informed her parents and called her boyfriend to provide supplies. She also called the ward medical station, did a quick test and was asked to be treated in the room.

“The most painful thing is when I call to cancel my bus ticket because I know that I will stay in Hanoi alone this New Year,” said the girl from Thanh Hoa.

“The closer the Lunar New Year approaches, the greater the people’s need for reunion and livelihood. Becoming F0 is inherently difficult, becoming F0 on the day before Tet suddenly becomes more difficult to accept for many people”, Master, Dr. Pham Van Tho, site administrator Consulting and support F0 has more than 30,000 members, said.

Doctor Tho said, on average, he consults about 50 F0 a day, both new and old. Most of his patients, in addition to health concerns, in the days approaching Tet, most of them are more depressed when they are delayed in work or plans related to Tet…

Page as well as 71% of survey participants Expectations of Vietnamese people on the occasion of Tet 2022 conducted in November 2021 by the market research company Q&me, intends to return home to celebrate the New Year in 2022. The survey shows that “health” and “family” are the two factors that Vietnamese people prioritize and feel. most valuable. Family reunion and relaxation are the expectations on Tet 2022.

Last year’s April 30 holiday, Trang was afraid of the epidemic and did not dare to return. At the end of the year, the whole family had two vaccines, she eagerly asked for early leave to return to her hometown. Trang craves home meals, wants to sleep next to her mother, confides in all kinds of sad and happy stories that last year did not always have the opportunity to talk. “Unexpectedly, for the first time in my life, celebrating Tet away from home, I still had to isolate myself in the mentality that everything went wrong. The more I thought about it, the more I felt sorry for myself,” Trang said.

It has been two days after the decision to quarantine, Trang still has not unpacked the luggage in the suitcase. She said, when she heard the news that her son could not come back, her parents cried and “as if there was no more Tet”.

Not as far from his hometown as Trang, 45-year-old Pham Quyet Thanh is isolated at home in Quynh Loi ward, Hai Ba Trung district. However, the last days of the year are an opportunity for the shipper to find a decent Tet for his family, now he has to leave early.

His wife gave birth to two children in three years, got sick again, so she stayed at home to take care of the children. The whole family, along with his 70-year-old mother, live on his income. “On average, every day close to Tet, he earns 600-700 thousand VND. But now, the whole family has to spend on savings, and it’s even more difficult than when they are apart,” said Mrs. Thu Hong, 35 years old, his wife.

In previous years, on New Year’s Day, Mr. Tao and Ms. Hong bought fruits, chung cakes, hams, and clothes to see them off to heaven. This year, because she couldn’t go out and lost her income, she planned to just burn incense “hopefully for your understanding”. The biggest headache is a single-armed sister taking care of two small children, taking care of her husband who has to be isolated and a 70-year-old mother.

According to the survey Expectations of Vietnamese people on the occasion of Tet 2022, Finance is the biggest concern of families, appearing in 64% of participants. Besides, nearly 50% tend to save money more than in previous years. Survey Tet Insight 2022 (made by Adtima), said that 33% of Vietnamese confirmed that they are not comfortable with spending too much during Tet. Thu Hong and her husband are among 17% who fear that they will not be able to prepare a Tet like every year. “Now it’s Tet, the whole family has nothing to eat, frugal in savings because I don’t know if I will be able to work next year,” she said.

Doctor Pham Van Tho said that contracting Covid-19 in the days leading up to Tet is something no one wants, but must face. Patients need to prepare medicine and medical equipment for F0 at home. If there are no symptoms or mild symptoms, the patient just needs to eat well, stay relaxed and should be treated promptly when there is a lot of cough, prolonged fever, shortness of breath… “Need to stay calm and comply. treatment regimen to recover soon and follow 5K regulations to avoid spreading to the community,” he said.

Pham Quyet Thanh said that after going on social networks to seek help, a unit brought to his house a package of drugs to treat F0. After three days, he tested negative. Determined that he could not go out during Tet, but he felt relieved when he knew that he was about to recover from the disease and especially his two young children and their elderly mother were not infected.

After two days of infection, Thu Trang’s symptoms of cough, shortness of breath, and headache began to thicken. Although she was disappointed because she could not return to her hometown to celebrate Tet with her family, this was also an opportunity for her to clearly feel the love of friends and colleagues for her. “The people who supplied me didn’t lack for anything,” she said.

Names of some characters have been changed