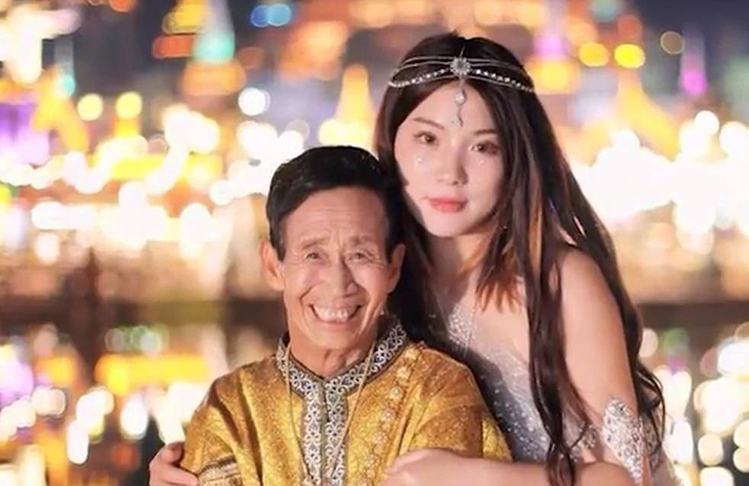 24 years ago, Truong Song Ky (50 years old) in Ha Nam saw a little girl abandoned on the side of the road in the cold, so he brought her home.

With the desire to find her family back, the next day Mr. Truong came to report to the village head. After many weeks, no one came to take it, Mr. Truong was still single, so he decided to adopt the baby and name it Truong Bach Cac.

Having no family, never taking care of a child, every day the father knocks on the door of the families with a newborn baby in the village to ask for breast milk to bring back to the Bach Cac. To earn extra income, he doesn’t mind doing anything, from farming, herding sheep, picking up scraps to working in factories.

Growing up with her father’s small silver coins, when she was a teenager, Bach Cac looked at her classmates with beautiful clothes and being transported by luxury cars, she felt self-conscious. She didn’t want her father to come to school or pick her up, and often criticized him for being smelly because he did all the hard work. Mr. Truong is very sad, but understands that he can only do so to raise his children.

In high school, Bach Cac began to criticize the lunches his father prepared were not as delicious as his friends. Then one day, she came home unexpectedly and found only a few cold vegetarian dumplings on her father’s table. “That’s when I realized, my meal was much better than my father’s. The best he gave me,” she recalls.

In order for his father not to work too hard, although his academic results were quite good, Bach Cac did not go to university but went to work to earn money. She entered the city to work as a waitress. The first month’s salary was 800 yuan (nearly 3 million dong), she spent it all to buy her father a new mattress, replacing the old mattress he had used for decades.

Not long after going to work, the accident happened again. Bach Cac was diagnosed with a serious illness. In order to have money for his son’s treatment, Mr. Zhang sold everything of value in the house and took him to Beijing. Father and son had to live in a dark and smelly slum. On the days of accompanying his children, the father sold more clothes for the street, picked up scraps so that Bach Cac could have enough quality meals. At that time, the daughter promised herself that if she recovered from the disease, she would definitely repay her father.

After recovering from illness, Bach Cac applied to work as a cashier in a supermarket and then sold cosmetics online. Working hard, capturing the tastes of young people, her business is getting better and better. After a few years, she established a small company and built a new house for her father.

At this time, Mr. Truong still lives in the countryside and is over 70 years old, his health is declining. Once, a neighbor called Bach Cac, her father fainted in the middle of the house, had to go to the emergency room.

The daughter returned home, saw her father emaciated on the hospital bed, suddenly realized that the most important thing to him now is the reunion, not the money. After many nights of thinking, Bach Cac decided to sell the company.

In May 2021, she bought an RV and took her father to many places in China. They go to Hainan Island to enjoy the tropical atmosphere, to Yunnan to eat famous delicacies or to Xinjiang to experience different ethnic customs.

When Bach Cac stopped all work to take her father to travel, she received many detractors. Many of her acquaintances said that Bach Cac was “crazy” when he was at his peak, giving up his job to take his father to travel.

Responding to the objections, Bach Cac said that she wanted her father to enjoy the best, which he had tried for her all his life. “If 24 years ago, my father didn’t pick me up. Then the days when I was in Beijing for medical treatment, when my father was not around, I wouldn’t be where I am today,” she said.

Many people also advised Bach Cac to find his biological parents, but she was adamant: “For me, in this world, only Mr. Truong Song Ky is the only father”.