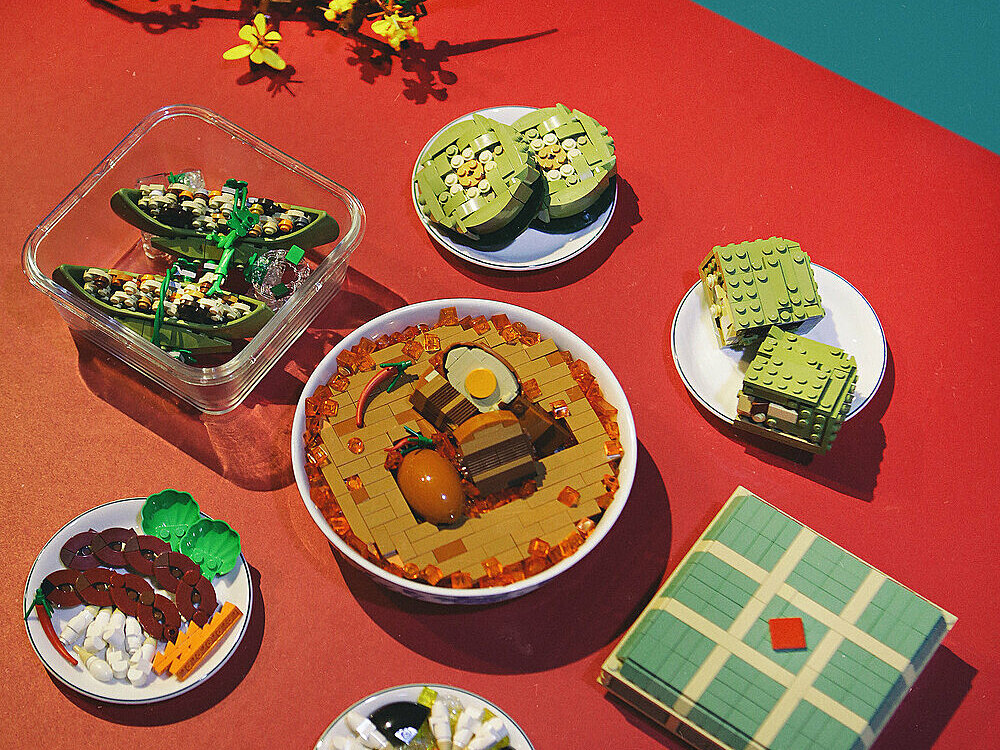 Tet dishes in the “Tet” project was made by Khang in December 2019. The idea came up unintentionally when a young man saw a piece of Lego in the shape of a dark orange half egg, very similar to and proportional to the seed of a braised meat duck. “Since then, I developed into many dishes on a Tet tray”, Khang said.

Conceptualizing and sketching has been difficult, it is even more difficult to “hunt” important Lego pieces suitable for the work. For Khang, yellow apricot branches are the most difficult thing because they have to find a piece of Lego to make a lively and “real” apricot blossom. After days of thinking, he chose two types of airplane propeller pieces. However, because these two types of pieces are old and not many, it is difficult to find and buy. Khang has to locate in many foreign stores, from Thailand to Germany and America. Wait 3-4 months to have enough “ingredients”.

In total, the project “Tet Holiday” uses about 5,000 lego pieces, completed in about a month. From the original purpose of “fun is the main”, Khang’s works now introduce the traditional Vietnamese New Year to international friends. Many overseas Vietnamese share these “dishes” that remind them of their homeland’s taste.

This year, instead of reenacting the food, Khang makes himself “a real pot of maize”. Works 35 cm high, with a pot of baby apricot in real life. Thanks to ideas and experiences from the branch of mai in the “Tet”, Khang only takes two weeks to complete this “pot of apricot blossom”.

Besides “pots of mai”, Khang joined with a friend to implement a project “Tet on” describing the atmosphere of the days before Tet by recreating a corner of Saigon street with CEE transformer station and trading activities. Floral flags for the purpose of introducing and promoting Vietnamese culture.