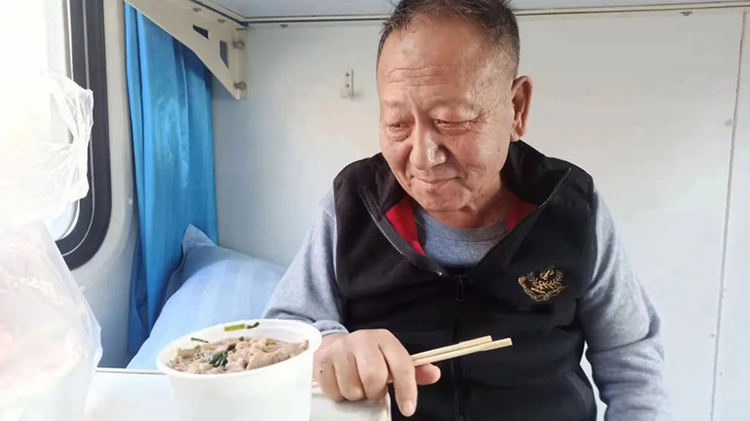 Due to a failed business, Mr. Khuong, a company president worth tens of millions of yuan, had to hide from his family and go out to pick up trash to live day to day.

A few days ago, a volunteer of the non-profit organization “Let Love Come Home” in Shenzhen found an old man wandering on the street. At that time, Mr. Khuong Nguyen Tran, 75 years old, had messy hair, haggard face, only a thin shirt, even though the weather was very cold. According to people around, Mr. Khuong has been wandering in this area for nearly two years.

After many contacts, the volunteer team learned that, before being homeless, Mr. Khuong was a famous businessman in the market.

Khuong Nguyen Tran was originally from Yantai, Shandong. In the 90s of the last century, he opened a garment company in his hometown, then expanded to Hong Kong and founded the Hong Kong Shenglong Group. Continuing the momentum, he moved to Shenzhen and opened the Shenglongfa food company and served as the company’s president. At its peak, this man was worth tens of millions of yuan and managed hundreds of employees.

In 2014, Mr. Khuong often appeared in front of the media and press as a successful businessman, having a high position in society and being respected by many people. During this year, he also expanded his business to Inner Mongolia and many other provinces of China.

However, since February 2017, when the companies represented by Mr. Khuong were listed as “Dishonest Enterprises”, the products were restricted from being sold, things became more difficult. Not long after, a number of companies had their business licenses revoked.

According to the share, to expand his business, the businessman surnamed Khuong took a bank loan. Due to the supplier’s debt, the chain broke. He went to claim everywhere but could not find a creditor, the company went bankrupt, he was forced to go to the street to earn a living by picking up trash.

Mr. Jiang has been wandering the streets of Shenzhen since 2020, often sleeping on park benches. Since coming to Hong Kong for business in the 1990s, he has had little contact with his family back home.

His ex-wife is now over 70 years old, currently bedridden due to illness. Knowing about him, she shared that when he was young, he did not care about his family, did not fulfill his responsibilities as a father, so she did not want to take him home. “For more than 20 years, he has had no contact or responsibility with the family. I worked very hard to raise my children, now my health is like this. Who is more pitiful?”, the woman said.

Khuong Nguyen Tran has two sons and a daughter. They all graduated from prestigious universities and have stable jobs. The children said that, although they were surprised to hear the current news about their father, they did not want to repeat the pain of the past.

However, on January 21, a volunteer of the non-profit organization “Let Love Come Home” still brought Mr. Khuong home. When he arrived at Qingdao North Station, his son and son-in-law came out to meet him.

The son said that the family has never abandoned his father. “We contacted him a few years ago but then lost all information. No one thought he had to wander and live so hard,” this person said.

“Now everything has passed. We don’t want to be disturbed by outside events anymore”, Mr. Khuong’s son expressed his wish.