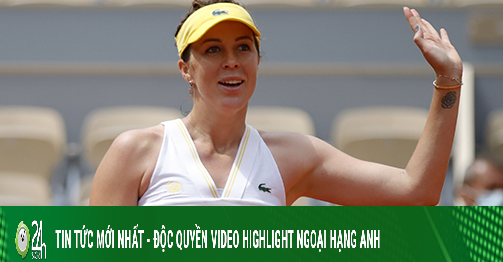 (Sports News – Tennis News) Pavlyuchenkova has just had an impressive comeback to win tickets to the quarterfinals against a strong opponent Victoria Azarenka.

Beautiful Russian tennis player Anastasia Pavlyuchenkova has just “broken” at Roland Garros, returning to the eighth round for the first time in a decade. The 29-year-old “beautiful woman” is gradually returning to the top when upstream defeating former world No. 1 Victoria Azarenka after 3 sets of 5-7, 6-3, 6-2. Pavlyuchenkova made an impressive comeback to win the right to continue

The 31st seed has never beaten Azarenka in an official match. Pavlyuchenkova is determined to return to the top 10 and his recent achievements are encouraging. The Russian star reached the semi-finals of the Mutua Madrid Open and now the quarterfinals of Roland Garros. Pavlyuchenkova’s next opponent will be the winner of the match between Serena Williams and Elena Rybakina.

Stefanos Tsitsipas will face his first real hurdle at Roland Garros against 12th seed Pablo Carreno Busta. The Spaniard is one of the experts on clay, so the tournament’s number 5 seed cannot be ignored. Tsitsipas will encounter a “hard” line

Tsitsipas is showing very high form since Lyon Open. The Greek player has won 7 consecutive matches and lost only 1 set in the last 4 matches. In the previous round, Tsitsipas defeated “Pilot” John Isner with a score of 3-1 after losing the first set.

Meanwhile, Carreno Busta had a poor preparation for Roland Garros when he was constantly eliminated early in clay tournaments. However, the Spaniard has only lost one set at the French Open. Tsitsipas won in the last two encounters and is likely to do the same in this match.

No. 2 seed, Daniil Medvedev cleared all doubts about his performance when he won quite easily in the last 3 rounds. In fact, the recent opponents of the Russian tennis player are quite “soft”, so Medvedev only lost a set at Roland Garros is not too surprising.

The next opponent of the second seed is Cristian Garin, who is ranked 23 in the world. Garin is a tennis player who specializes in playing clay. This player also had a bad run before Roland Garros and competed quite hard in the last 3 rounds.

However, it was Garin who eliminated Medvedev at the Madrid Open 2021. That match ended with a score of 2-1 in favor of the Chilean. Will Roland Garros’ second seed deliver another shock?

The two players have just met at the Rome Masters, the last tournament they played before going to Roland Garros and the winner was Alexander Zverev after 3 sets. Previously, Zverev also won when these two players met in Madrid and it is very likely that it will meet again this time. (Video Federer – Koepfer, 3rd round Roland Garros) The match had 3 tie-break series and took place in 51 games and the winner…