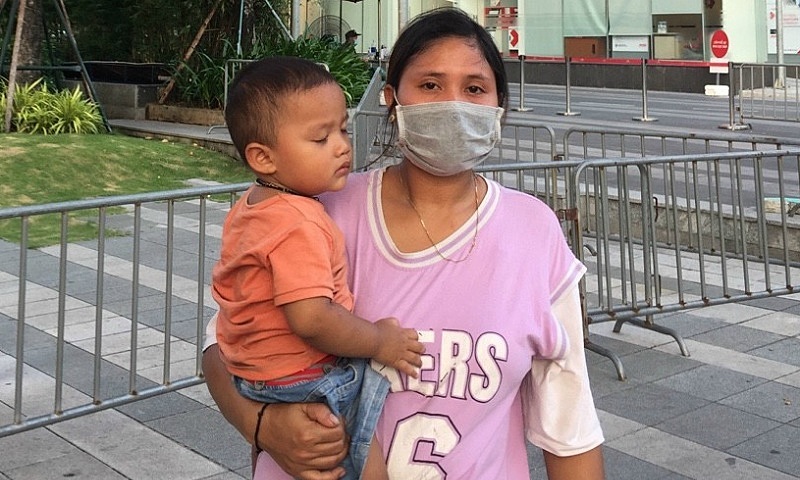 Nghe AnSelling two goats and five chickens, Nghia and her husband took their children to ride a motorbike to the provincial hospital. Hearing the doctor say that I have retinal cancer, they rushed to Hanoi.

Chich Thi Nghia, 28 years old, does not know how to ride a motorbike, so her husband, Hop Van Thu, had to pass a long way. From Sop Pu village, Yen Na commune, Tuong Duong district to Nghe An province hospital is nearly 200 km, from there to the Central Eye Hospital (Hanoi) is another 300 km long.

Thu, 34 years old, is a longtime motorbike taxi driver, but only runs around Yen Na commune. This is the first time the Kho Mu couple has gone to the street. Not knowing the way, they just follow the signposts and ask questions and run. Unlike those returning home to avoid the epidemic, the trip of the family of three had no one to support along the way.

“Cu Tai was caught in the middle, fell asleep on my arm, causing me so much pain. Sometimes I overslept, my husband kept patting my thigh, shouting loudly to wake up,” Ms. Nghia recounted the trip in July. Kinh language is not good.

On the way, it rained heavily, the couple huddled in a raincoat with more than 70,000 VND bought along the way, trying to cover their son from getting wet. When the arm was numb, the child was shivering because of the cold. The couple had to rent a small motel room in Ninh Binh to stay for one night. Therefore, the trip to Hanoi lasted more than 20 hours.

A few days before, Cu Tai, the two-year-old youngest son of Nghia and his wife, appeared in a state of tripping every step of the way. Seeing that the eyes did not look at them, their heads were large and small, their faces were covered with dirt because of tripping, the couple took the Tai pass car to the provincial hospital. After scanning, the doctor concluded that the boy had retinal cancer, wrote a letter for transfer to the Central Eye Hospital.

The bus is not working because of Covid-19. The ambulance cost 3 million dong for the trip, while their pocket was just over five million dong. The couple called back to ask their neighbors to pay attention to their two daughters at home, and drove Cu Tai by motorbike to the capital.

Hearing the doctor from the Central Eye Hospital announce that the results coincided with the provincial hospital, Nghia collapsed in silence. Her husband hugged her daughter with wet tears smearing her dusty face.

After a week, they had to move from the Central Eye Hospital to Saint Paul Hospital, then K Tan Trieu. The two-way city street made Thu panic. The honeycomb sandals scrubbed hard on the road every time it was found to be wrong. But going around forever did not get there, while saying and gesturing, the couple rented a motorbike taxi to lead the way, costing 80,000 VND per turn.

Arriving at K Tan Trieu Hospital, Mr. Thu handed over the child and wrapped the money for his wife, telling the doctor to follow the procedure. In the countryside, they have two daughters in grade 3 and grade 4 that need to be taken care of, so Thu has to go home.

“In this village, out of 168 households, 110 households are poor. Mr. Tai’s family and Ms. Nghia’s family means that the few who work hard are among the group of more than 30 near-poor households, which means they have a little more economic income. Cancer makes them very difficult,” said Mr. Cu Van Thanh, head of Sop Pu village.

Mr. Thanh said, because the whole village is poor, so the cadres called for each household only two thousand and five thousand, so they did not mobilize.

Alone in the middle of Ha Thanh land, Kinh language is not fluent, Nghia can only cry, hurriedly followed the medical staff to go through the procedure. Mother and daughter often sit in the corner of the bed, rarely communicating with strangers. “I can’t speak, but I still understand. Some people say that I don’t take care of children, because it’s dirty so my eyes are damaged. I don’t know how to speak to make them understand,” she said.

But also thanks to a mother of a pediatric patient sharing a room, she learned about the group “Lovely Cars”, which specializes in supporting poor patients to return to their hometown for free. Not only transporting her every time she went to the hospital, the group members encouraged and supported her family mentally and physically. “Thanks to you, I see that there are still many good people in the world. Everyone also told me that being sad can’t solve anything, to be strong for my children”, Nghia broke.

Knowing her weakness is in communication, she talked and texted with people she knew. Nghia wants to learn the Kinh language fluently so that she is less surprised every time she takes her children to Hanoi and most importantly, can invite people to buy fresh and dried bamboo shoots.

After finishing a course of treatment for Cu Tai, the couple returned to their hometown, sent their son to the neighbors, and mobilized their two grown children to dig bamboo shoots in the mountains. These days in the West of Nghe An, the whole family gets up at five o’clock in the morning. They took each other to climb the mountain for a few hours to reach the point of digging bamboo shoots. In order for each person to carry bamboo shoots, the whole family has to work hard until 7 pm. Nghia often stayed up until midnight, boiled bamboo shoots in time to sell them in the morning.

Ms. Ngo Thanh Thuy, a member of the group Cars of love, said that she loves Nghia and her husband very much because they are honest and work hard to earn money to treat their children. “I often say that Nghia brings bamboo shoots to Hanoi, she sells them for a better price. But sometimes when she gets help, she is afraid of being in debt,” said Ms. Thuy.

This month, the boy Hap Van Tai will do surgery to remove one eye, costing about 60 million VND. But on January 5, Chich Thi Nghia returned to the capital with only 500,000 VND in her pocket.

“It was time to treat my child, so I had to go down. I was waiting for my husband to borrow money, then send it later,” Nghia said. This time, with dried bamboo shoots and fresh bamboo shoots in a few sacks, she brought her car back to Hanoi. Not sure how much from this shipment, but Nghia still hopes to be enough for mother and daughter to take care of their meals during the hospital days.

With the goal of instilling confidence in pediatric cancer patients, the Hope Foundation cooperates with the Mr. Sun program to launch the Sun of Hope program. One more of your cooperation is another ray of light to the future generations of the country. Please see information about the program here.