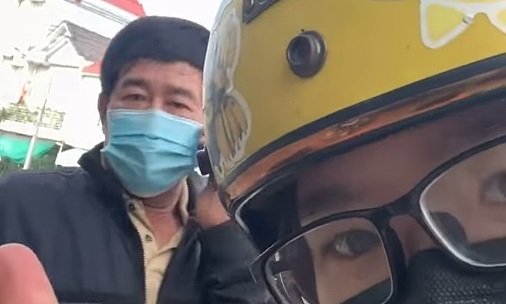 Gia LaiFor nearly a year, his daughter was stuck in Nha Trang because of Covid-19, when the distance was over and there was no passenger car, Mr. Khanh rode a motorbike to pick her up.

“Father pick me up,” Hoang Cong Khanh, 51 years old, living in Yen The ward, Pleiku city asked his youngest daughter on the evening of October 21.

His daughter is Hoang Anh, 19 years old, a student at Nha Trang University. Since the beginning of this year, Gia Lai became an epidemic area when positive cases appeared, the freshman was forced to stay at school, celebrating Tet away from home.

Hoang Anh planned to return home during the summer vacation, when the 4th wave of epidemic broke out. In July, the accommodation in Nha Trang city turned into a red zone, Anh went to an acquaintance’s house in Ninh Phu commune, Ninh Hoa district to avoid the epidemic.

At the beginning of October, when localities opened their doors to welcome people back from provinces, Anh looked for a car, but intercity passenger transport had not resumed, she waited but did not know when. She hasn’t been home for nearly a year, and every time she calls, she cries. “In the past 19 years, I have never been away from home for so long,” Anh confided. Heard his father said he would ride a motorbike down to pick him up, Anh refused. But thinking about his children, Mr. Khanh decided to go.

At 10:00 a.m. on October 23, holding a certificate of first-time vaccination and a negative rapid test result, Mr. Khanh went home to eat two cups of rice quickly, hung a small water bottle on the car, and went straight to Khanh Hoa.

“Living more than half a person’s life, but this is the farthest motorbike trip,” Khanh said. During the nearly 400 km journey, he did not dare to rest because he was afraid that his children would wait. Along the way, he only took advantage of the time to wear and take off his raincoat to sip water to help dry his mouth.

After more than 6 hours of driving, Mr. Khanh texted his son: I am waiting for you at the fork in Ninh Hoa town. Anh hugged his belongings and asked someone to take him to the meeting place.

Seeing her father from afar, she shouted loudly and ran to hug her after nearly a year of separation. “Meeting my baby has stopped my anxiety and worry,” the 51-year-old man recounted. It was dark, two or three children decided to stay in Ninh Hoa town for one night.

At 7 a.m. the next morning, Anh and her father were on their way home. Used to be taken by their father to play around Gia Lai, but this is the first time two or three children have traveled hundreds of kilometers. The car carried two people, a lot of things, the road was slippery due to heavy rain, Mr. Khanh drove slowly, walking while enjoying the scenery and chatting with his daughter.

Travel time was longer than expected when having to stop three times to make a medical declaration. “People go quickly, but people at home are extremely impatient,” said Mrs. Nhung, Khanh’s wife, and said that many times when calling two or three children, no one answered the phone, she and her eldest son were like sitting on a fire.

More than 5 pm on the same day, the car of two or three children turned into Phan Chu Trinh street. Realizing the familiar green gate, seeing her mother’s figure peeking outside, Anh burst into tears. “Going home, son,” Mr. Khanh parked the car in front of the yard, wiped his dusty face and bloodshot eyes after a long journey.

Two days after the reluctant journey, Hoang Anh showed off three clips sneaking back home. She said that at first, her father did not allow her to use the phone while on the road, but when she saw the clip, Mr. Khanh was interested.

Picking up the child home, the 51-year-old man felt relieved and said that in the near future, if the school lets him go to school, but the bus has not yet run, he is still willing to travel nearly 400 km to take his children to school.

As for Anh, the 19-year-old girl hopes to be able to join her father in making new discoveries when the epidemic is over. As for going back to school, she hopes the intercity bus will resume soon to save her father’s trouble. “Being home with my parents is the happiest thing to do after nearly a year away from home,” Anh confided.

The video, which was picked up by Hoang Anh’s father at home after being posted on social networks, has received tens of thousands of likes. Many people who do not know also comment to share their happiness and admiration for the love of two or three children.

“There is only one man in the world who is best to me, especially three. I just watched the clip and suddenly cried”, a user named Nhat Ha left a comment.