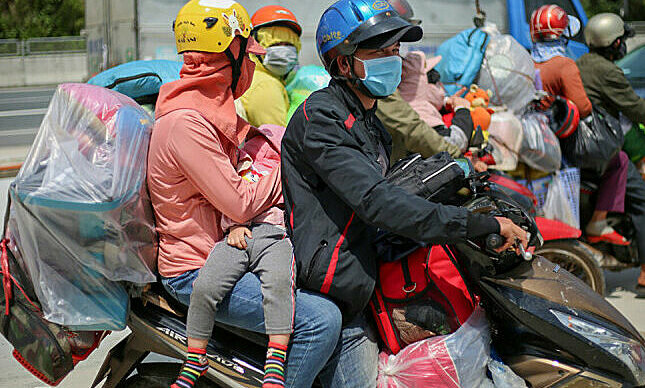 Female worker Nguyen Nhu Quynh, 32 years old, vowed never to ride a motorbike back to her hometown, after a journey of more than 370 km that sent her 5-year-old daughter to the hospital.

Due to the company’s early New Year’s break, Quynh joined a group of compatriots who rode motorbikes from Binh Phuoc to Gia Lai to find someone to share the car, and changed drivers along the way. She has never ridden a motorbike for more than 100 km and has a 5-year-old child, but she still decided to hit the road on January 19. “The baby has not been vaccinated, I am afraid that traveling by bus can catch the virus from other people,” Quynh explained. Instructed by people who have a lot of experience in long-distance driving in the group, Quynh maintains the car, prepares furniture, food, and water.

One third of the way, Quynh’s daughter suddenly complained of fatigue. When she stopped the car, she saw that her son was shivering and crying, his forehead was burning hot. The group of more than 20 people pulled over to the side of the road to wait.

“Worrying about my children, afraid to bother people traveling long distances and tired, I asked my friend to go with the pass to the hospital and then tell me to go home first,” she said. Some people separated from the group and ran back first, some chose to stay and wait, but Quynh said she would leave her children at the hospital to monitor. The journey that seemed to take only one night to get home for her mother and daughter lasted for three days.

After leaving the hospital, there were only two mother and daughter left, so Quynh ran “like a cow on the road, only daring to keep the speed 30km/h”, but the weak steering wheel was not used to driving on the highway, once a truck passed, the wind blew. workers staggered and fell. Mother and daughter were bleeding. “Fortunately, I got home,” she said.

In early December, Le Van Vui, 28 years old, joined the group “Motorcycle riders going home”, gathered nearly a dozen young people to run 1,200 km from Ho Chi Minh City to Nghe An when they heard that a compatriot was traveling with a coach. have F0, must be isolated for 21 days. Afraid of facing a similar situation, a guy working as a mechanic in Binh Tan district chose to return home by motorbike. “Living a year of Covid-19 makes me so cold, I don’t want to cause any more trouble related to it,” he said. In previous years, outside of the 20th lunar month, he only left Saigon, but this year it was almost a month ago because he just needed to be reunited.

On long distances, in addition to gasoline, the group brought car repair tools to prevent the car from breaking down. At departure, every car was dangling instant noodles, dry food, filtered water because everyone agreed not to visit any shops along the way to avoid the risk of Covid infection. On the two-night, three-day journey, Vui’s group had to rest along the way nearly a dozen times. During the day, when the sun is shining, they park their cars at the corner of the road. In the evening, they stop under the bridge, the porches of people’s houses are closed, and take out food to eat.

Le Van Vui is one of nearly 2,000 members of the group “Motorcycle riders go home” on social networks founded by Nguyen Van Linh, in Anh Son, Nghe An. When Covid-19 broke out, he guessed that many people wanted to ride motorbikes to their hometown, so they formed groups to share experiences and support each other. “Many people go home alone so they have companions, those who don’t have a car have their compatriots to give them a ride,” said Linh, a freelance worker in Bac Ninh city.

From the beginning of the 12th lunar month, group interactions with members from all over the North, Central and South provinces are more exciting. On average, every day, there are nearly a dozen people who want to set up a repatriation association. “Small groups of about ten people, large groups sometimes up to hundreds of people,” Linh said.

According to the survey of VnExpress, More than 20 days before the Lunar New Year, air tickets for domestic routes during Tet are still quite plentiful, many domestic flights have the cheapest fares in the last 3 years. Even on the golden route from Ho Chi Minh City to Hanoi, round-trip tickets on peak days are only 2.5 million, more than half the normal price. Train tickets for Tet this year are also less sought after. A representative of Mien Dong bus station (HCMC) estimated that the number of passengers returning home by bus this year decreased by more than 40% compared to last year. The Department of Transport of Ho Chi Minh City said that some inter-provincial bus stations sold less than 20% of tickets.

Driving a motorbike to repatriate on the day of Tet is not known if it will help people avoid infection, but facing danger is obvious. Not only Quynh’s mother and daughter had problems, but also healthy young men like Mr. Vui were also exhausted because they were sitting in the car all the way for 1,200 km, not eating enough, absorbing the wind and dew. Happy to say, when crossing Hai Van pass when it was dark, his strength was weak, his stomach was boiling with worry. Going down the pass, the whole group called to go closer together, firmly grasping the brake.

Arriving in Quang Tri, a car was hit by a nail along the road, with a punctured inner tube. Because of waiting for each other, the group returned later than planned. “Going to the quarantine area of ​​my province, I lay down for a whole day because I was exhausted,” Vui said.

Just got home last night (January 22), Nguyen Ngoc Minh Duc, 26 years old, said he lost money in car tickets because he was driving a motorbike from Thu Dau Mot, Binh Duong to his hometown in Dak Lak. Driving alone through the bend on bridge 14 (bordering Dak Lak – Dak Nong), he was speeded by the traffic police and paid a fine of 300,000 VND. Returning to E Kar town, he continued to lose 400 thousand VND due to running more than 50km/h. Minh Duc posted on a group for Dak Lak people who ride motorbikes to their hometown, there are more than 90,000 members, to tell the truth, dozens of “experts” are in the same situation.

According to Linh, if not for the sake of reluctance, weak people should not ride motorbikes to their hometown. Depending on the distance traveled, an average of four hours should find a place to stop for 10-15 minutes to wait for the group, solve personal problems and let both the car and the people rest. If the group has someone who knows the route, they should take a shortcut. The rest, need to go to the main road, equipped with Google map to not get lost.

“Long-distance riders must have good physical strength, be alert enough to handle obstacles. The two people in the car must have a driver’s license to take turns running,” Linh learned from experience.

On January 16, he and more than a dozen compatriots also gathered at a gas station near the highway of Bac Ninh city to ride a motorbike to their hometown. The guy in the west of Nghe province borrowed a house in the forest for the whole association to isolate, both airy and safe for the people around.

Mr. Le Van Vui also completed the isolation at the Commune People’s Committee, relieved to be with his family in the coming spring. The slight wound on Quynh’s mother and daughter has recovered. She said that temporarily let her mind relax for a few days in the spring, and after Tet, she will calculate which means of transport to return to work.