For men, sport seems to be everything. The appearance of a series of prestigious tournaments in the last month of the year including AFF Suzuki Cup 2020, English Premier League, Formula 1™, UFC, Golf Hero World Challenge… contributed to a diverse sports feast – the highest level of conquest. absolutely the heart of this community of hardcore sports fans.

The AFF Suzuki Cup 2020 officially participated in the top sports party at the end of this year, being the “spiritual food” that Vietnamese fans have been waiting for most for more than two years. Opening from December 5 in Singapore, the AFF Suzuki Cup 2020 becomes the most important goal for the top three Southeast Asian teams, Vietnam, Thailand and Malaysia to regain confidence after the defeats in the first round. World Cup type.

Although they are rated higher than their competitors, the journey to defend the throne of the red shirt boys will not be easy because both Thailand and Malaysia are very hungry for this title. The Thai Football Federation has summoned the strongest squad and awarded up to 20 million baht (about 13.4 billion VND) for the championship.

As one of the first teams present in Singapore, the Vietnamese team had the first training session and was full of determination to conquer the championship. With the return of Minh Vuong and other key figures such as Quang Hai, Tuan Anh, Cong Phuong, Ngoc Hai, Tien Linh… “golden star warriors” are ready to welcome regional rivals. The AFF Suzuki Cup will take place throughout December with the group stage matches, the semi-finals, and the first leg final. Bishan Stadium, where the matches of the Vietnamese team take place, has a capacity of 7,000 seats, but the organizers only sell 1,000 tickets per match. The matches of the Vietnamese team in the group stage were “sold out” less than a day after the Football Federation of Singapore (FAS) opened for sale online.

Due to the epidemic situation and the complicated entry process in Singapore, fans in Vietnam could not come to cheer for the national team as in previous times. Fans can only fuel Park’s army through the small screen.

K+ TV will accompany the fans and the home team in each battle of Vietnam Tel in the AFF Suzuki Cup. Not only will the entire tournament be broadcast on channels VTV5, VTV6 under the K+ satellite digital television infrastructure, K+ will dedicate a very popular companion program – Sa Ban, for the audience to listen to former famous players. The Vietnamese team analyzes the team and its opponents weekly.

The English Premier League lights up on the eve of Christmas and New Year, K+ satisfies the feeling of endless “sporting” for fans

In addition to the AFF Cup, the Premier League’s Boxing Day event helps to make the year-end sports party more spectacular and awaited than ever.

Competing on Boxing Day has been a specialty of English football for hundreds of years, especially when the European national championships are all winter break on Christmas, the English Premier League still plays in the next few days. This day, even with a density of 3 matches within 7 days, it really becomes an extremely attractive highlight.

This is also the time when the big boys show their class and position of the home team. Therefore, football followers certainly cannot ignore the fierce battles: Manchester City will face Leicester (December 26), Liverpool will face Leeds (December 26), Chelsea will be a guest before Aston Villa (27 December). December), MU marched to Newcastle (December 28). Who will be crowned the first leg after the intense journey? What worthy names will the top 4 call? Only K+ can bring such exciting matches to the audience. 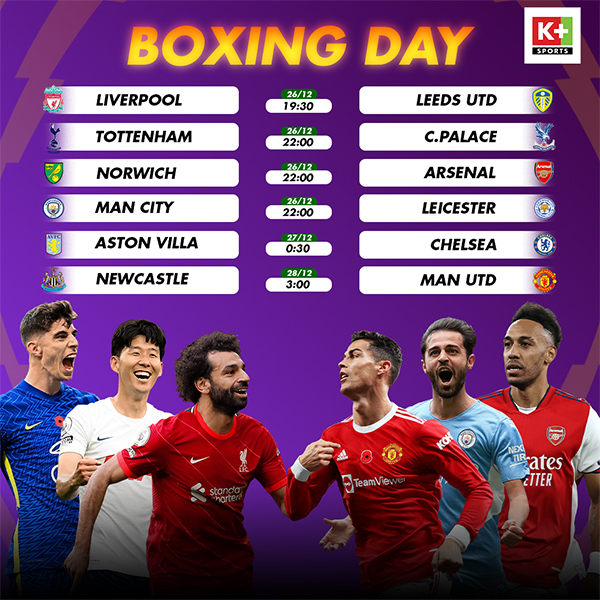 Along with the intense and drastic happenings on the English pitch, K+ also brings viewers the exclusive companion programs that have made the brand such as Team I Love, My Club – My Club, Legendary perspective… For men, sport seems to be everything and K+ completely conquered them by this exciting and monumental year-end sports party. In particular, K+ also offers shock deals for all Vietnamese families to fully enjoy diverse entertainment contents – top notch, energizing and jubilantly welcoming Christmas and New Year.