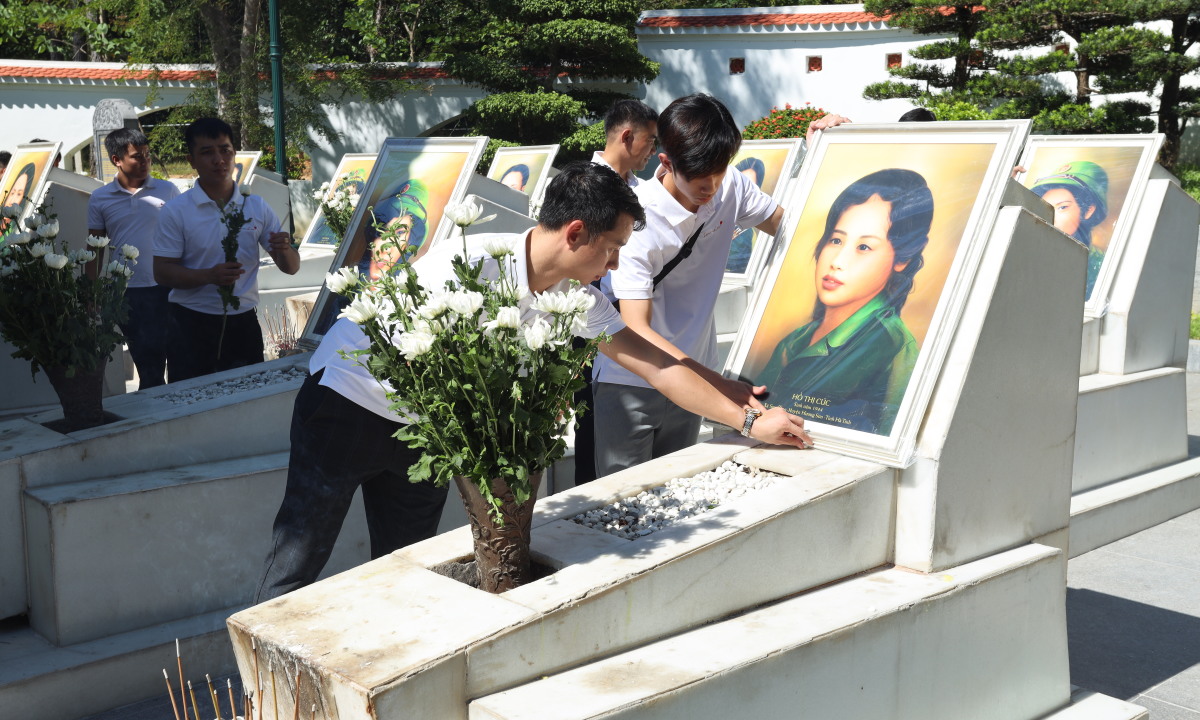 Ha TinhThe restored photos are as sharp as new taken of young female volunteers who were sent by Trung’s group to the Management Board of the Dong Loc T-junction relic site on August 18.

At 8 am, Mr. Phung Quang Trung, 27 years old, and a group of 9 people from Hanoi came to the Management Board of Dong Loc T-junction Cemetery Monument, Dong Loc town, Can Loc district, and presented 10 photos of 60 x 90 size. cm, restore portraits of 10 young female volunteers who died on July 24, 1968.

Dao Anh Tuan, deputy head of the management board of Dong Loc T-junction relic site, said that the unit received an offer to restore photos of martyrs to express gratitude from a group of young people outside Hanoi. August.

“When they fell, the sisters did not have a picture of themselves. We used to see their black and white images through documents, but now the restored photos are in color, each gesture is clear, and their facial expressions exude a strong vitality. of the age of 20. The picture is so real and beautiful,” said Mr. Tuan emotionally.

After presenting photos to each martyr’s grave and performing a ceremony, the unit sealed it and planned to hang it in the traditional room of the Management Board. “In July next year, on the 55th anniversary of the sisters’ death, we will put them on display so that people can admire,” a representative of the management board shared.

Trung is one of six members of TeamLee, which specializes in restoring free images of martyrs in Hanoi. In June, the group made and hand-delivered more than 200 photos of martyrs to families, on July 27 to express their gratitude.

“The amount of photos that we want to be restored is too large, we have not had time to make 10 female volunteers in Ha Tinh. Now that National Day is coming to September 2, the group decided to make and send it to the local government. , the management board of the monument to display it,” Trung shared about the idea of ​​​​making a photo.

Time is urgent, the group sent a member to Ha Tinh to ask for documents and pictures and embark on implementation, expected to be completed before August 14. On average, each photo needs 4-6 hours to edit and restore. Due to the work day, the team can only execute the project at 8pm every day, so it takes 2-3 days to complete a picture.

Old photos, many blurred details, Trung and his team had to work through the night. The members constantly discussed and made suggestions to edit, hoping that the photo would show the true portrait and spirit of the martyrs, but it is inevitable that there are times of quarrels and disagreements because they want a perfect product. most perfect.

“Thanks to the documents and careful description of the Monument Management Board, we were able to portray the portraits of the soldiers in the most authentic way,” Trung said. The moment 10 members of the delegation held 10 portraits of martyrs at the cemetery, no one could hide their emotions, knowing that the efforts of the past two weeks were worth it.

Reconstructed images of young female volunteers were shared on social networks, attracting tens of thousands of likes and comments. Many people expressed their admiration and gratitude when once again seeing the portraits of resilient girls who sacrificed their youth to protect the Fatherland. “We bow our heads in gratitude to those who lay down to let us have today’s freedom. Thank you to those who have restored the best photos in the youth of the female soldiers who paved the way”, who Use Minh Luan to comment.

In the near future, Trung’s group plans to make a group photo of 10 female volunteers instead of a portrait. The image size will be larger for display in the museum. “It will certainly be difficult and take many months to research and come up with the perfect product, but we hope to be able to do something, express gratitude to those who have fallen,” the 27-year-old man said. confided.