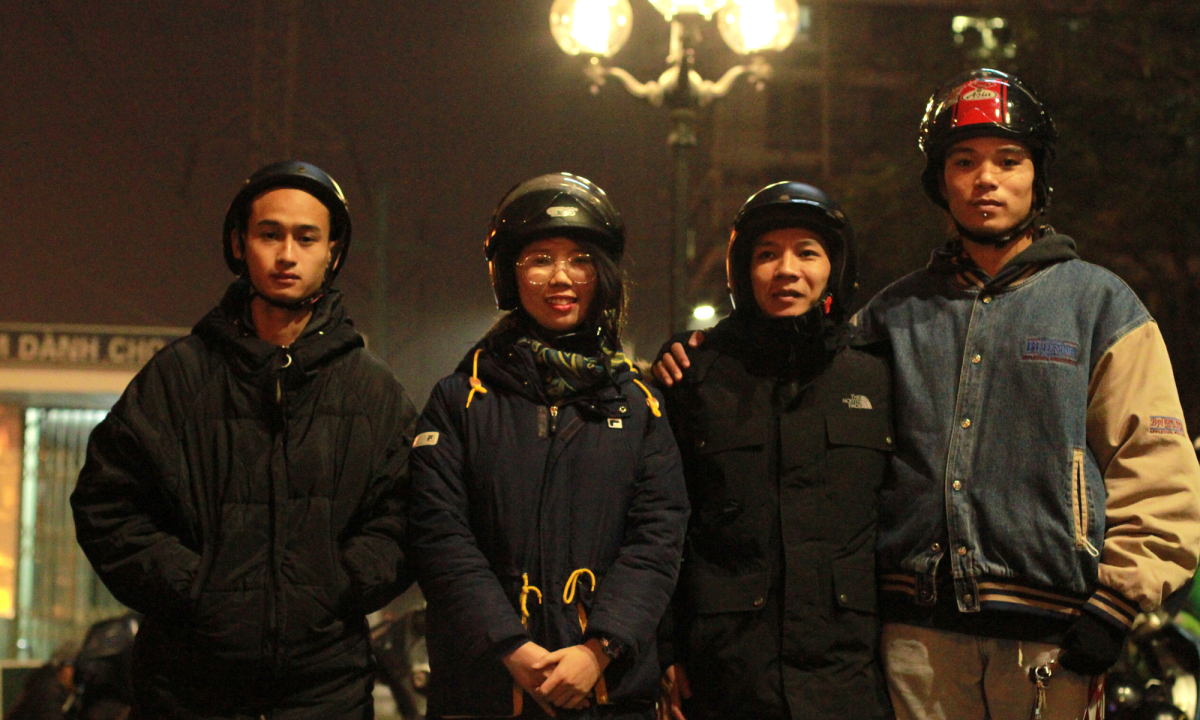 HanoiAt 12 o’clock at night, Hoang Anh circled the flower garden in Tay Ho district, glanced at the three people sitting around a fire and decided to drive in.

Two boys in warm clothes sat next to the middle-aged man. Looking at them like a father, but noticing that the child seemed tired, the two people in the car walked over to say hello. “Can we sit here and talk a little bit?”, Hoang Anh slowly said. The eyes looked up with a look of investigation.

Sitting down next to the fire, Hoang Anh looked into the eyes of the two children, said: “This cold night, do you guys need any help?”. Two kids one skinny, one fat silent. The middle-aged man answered with his dog walking around here, then stood up and left.

Hoang Anh began to make friends with two children. “We belong to the Green Dragon Foundation, specializing in helping street children,” the young man looked at the two children, before continuing, “I can also help them with accommodation, soccer, and health checks. Late night. Out in the unsafe street, there are a lot of bad objects.

At this time, Hoang Anh began to talk more carefully about his current work. He told the situation that some children had met, warned of dangers lurking on the street; at the same time show some pictures of the street children being supported. In the picture there are people you two know. The similarities and ways of talking make the two boys remove the “guarding fence”, gradually opening their hearts. The thin boy said that a few days ago, he slept in the flower garden and lost his papers. Now he can’t go to work, but he still doesn’t want to go back to his hometown. 14 years old fat boy, from Bac Kan, his father went to prison.

“I can help you find a safe place to sleep tonight, or if I don’t like I’ll bring you back here,” he said. The wandering children, especially long-term lives on the street, always have a high “survival instinct” so the two boys immediately refused. Hoang Anh gave each of them some money to find a place to sleep. He discussed the contact, he will see you tomorrow morning.

It was a night of work for Hoang Anh, 27, the captain of the Street Outreach team of Blue Dragon – an organization established in 2003 to support street children in Hanoi.

For many years now, the Street Outreach team has been out in the streets every night looking for children in need, in some “hot spots” such as under bridges, parks, flower gardens and bus stations … The team has 7 official members and many collaborators. In addition to the main task of finding children, the division also divided each other to work at boarding houses, to visit families being organized to help, bring the children back to their hometowns, allow them to participate in physical activities, checkups. health … with the aim of bringing street children out of the drag of crime, protecting them from the risk of becoming victims of social evils.

On the night of meeting two boys in the flower garden along West Lake, Hoang Anh and Son went to the 4 game shops in My Dinh area to look for children and ask the owner to announce each time the child showed signs of needing assistance. Here they met a boy from the province leaving home and helping him with a warm coat.

“Around the My Dinh area, especially during the summer and near Tet, children often come back from the provinces. They are easy to become prey for the group of pedophiles and job brokers. have little money in person and will go to the game shop. We always try to reach out to the children before encountering bad objects “, Hoang Anh said.

At 0 o’clock, they were looking at the side of Truc Bach Lake when they met a child named Trinh. The boy shared last night seeing two young people wandering recently.

Three years as a member of Street Outreach, the Union finds itself doing a “valuable” job. Cong remembers the last time around 0 o’clock a night in August, he and his partner Minh Hai saw two children sitting at the bus stop near My Dinh bus station. Ten meters away there was a middle-aged man walking around the car.

The children looked tired, limbs stained, determined that this was a new child to Hanoi, Cong stopped the car from afar, walked over to get acquainted. After a while talking, two boys aged 15 and 17 said that their hometown of Ha Giang had been working for half a month in Hanoi when the shop was closed because of Covid-19. Both use 400,000 VND of wages to roam to find new jobs, but have no place to hire. Three days out of money, they went to the bus station. The two children jerked their faces towards the man, whispering: “He just solicited us to touch his genitals and he would give each of us 100,000 dong. We refused, he was still insisting and waiting for them. I change my mind “.

Cong and Hai immediately put the two of them to sleep in an Internet shop and bought food for them. The next morning, Cong returned, reassured to know that the two children would be picked up by relatives. He gave the children some extra money to carry along the road, and brought in contact with the organization in case they needed help.

Many times, team members have faced with bad guys to protect children. Two months ago, Hoang Anh broke into two men who were asking three boys to go home to sleep.

Minh Hai, who works as a child finder for 2 years, cannot forget a winter night last year. That day on the side of the road behind the My Dinh bus station, there was a boy wearing a backpack, a cap on a bottle, his feet with no force like walking indefinitely. Hai immediately slowed down, before getting out of the car and led him beside the boy. “You look tired. Have you had dinner?”, Hai asked. The boy hesitated forever. On the one hand it wants to eat, on the other hand it is scared, constantly looking first, looking back.

Walked for about 2 kilometers, the boy was less alert. He received a box of sticky rice from Hai and ate it all. After eating, more confident, it just said that more than a month ago, she was lured into a black credit gang. Running from that ice, he is now very afraid of revenge. It also doesn’t know where to go, where to go, and who to ask for help.

On average, each year the street child search group helps about 100 street children in Hanoi. Many of these children have returned to their families or have been helped to return to school. Many successful children in the field of restaurants – hotels, tourism … 10% of Blue Dragon’s employees were children who were supported by organizations. After escaping the difficult life, they return to help the kids.

“I see my work as a filter. When they meet us, they have the ability to rebuild their lives. When they do not meet, they are easily caught up in evils”, Hoang Anh shared.

Recently, two boys from Ha Giang came to call to notify Cong that they had returned home to work in the fields with their parents and waited until they were old enough to go to work. As for Hoang Anh, after the night of January 12, he helped the 14-year-old boy find a safe haven.

Inside the sleeping city there are always children being pushed into the streets for so many reasons, surrounded by many traps. That is why for the past 17 years the Outreach team has been out on the streets at night.

After 17 years of operation, Blue Dragon has helped 607 street children reunite with their families, rescued 1,000 trafficked people, 5,259 children went to school or vocational training, and helped 13,514 children and families with proper papers. France. Blue Dragon has been recognized by the Ministry of Defense, the Ministry of Public Security and many state agencies for its contribution to the prevention of human trafficking and helping street children.

* The victim’s name and some locations have changed