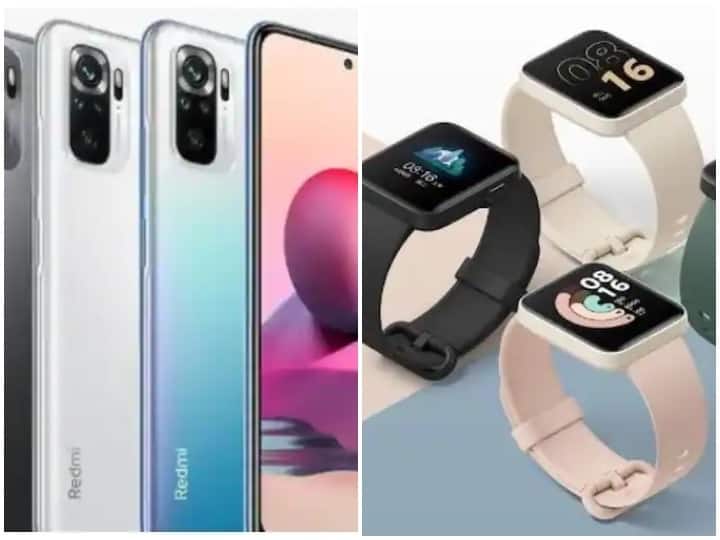 Price and availability
In India, the 6GB RAM + 64GB storage variant of the Redmi Note 10S is priced at Rs 14,999 and the 6GB RAM + 128GB storage model is priced at Rs 15,999. It is available in Deep Sea Blue, Frost White and Shadow Black three color options. Redmi Watch Price. Rs 3,999 and it has been introduced in three watch case color options Black, Blue and Ivory.

Specifications of Redmi Note 10S
Redmi Note 10s has a 6.43 inch Full HD Plus AMOLED display. The MediaTek Helio G95 chipset has been given in this phone. You will get 8GB of RAM and 128GB of internal storage. Talking about the battery in the Redmi Note 10s, a 5,000mAh battery has been given which comes with 33W fast charging support. A side mounted fingerprint scanner is provided. This phone will run on MIUI 12.5.

Quad rear camera setup
It has a quad rear camera setup, whose primary camera is 64 megapixels. At the same time, 8 megapixel ultra wide second lens, 2 megapixel macro sensor and 2 megapixel depth sensor have been given. The phone has a 13-megapixel front camera for selfie and video calling. The weight of this smartphone is 178.8 grams and it is IP53-rated for dust and warp resistance.

Compete with realme 8
Redmi Note 10s will compete with Realme 8 in India. The smartphone has a 6.5-inch IPS LCD display, which has a resolution of 1080×2400 pixels. Its refresh rate is 90Hz. The phone dimensions are equipped with 700 processors. The phone works on Realme UI 2.0 based on Android 11. This phone is available in two variants of 4 GB + 128 GB and 8G + 256GB. Talking about photography, the triple rear camera setup has been given in Realme 8 5G smartphone, whose primary camera is 48 megapixels. Along with this, two other lenses of 2 megapixels have been given in the phone. It has a 16-megapixel front camera for selfie and video calling. For power, it has a 5000mAh battery, which comes with 18W fast charging support. The initial price of the phone is Rs 14,999.

Redmi Watch specifications and features
This watch of Redmi has been launched in a 1.4-inch LCD color touch-screen display with 320 × 320 pixel resolution. It has 120 watch faces. Talk about connectivity, Bluetooth 5.0 and 7 Sport modes have been given in it. You have been given great features for activities like running and out-door cycling. This watch also has sensors like Heart-Rate, Geomagnetic and Ambient Light. It has a 230mAh battery, which gives a 7-day backup on a single charge. This watch also has features ranging from sleep tracks to call-message notifications.

This smartwatch will compete
Many smartwatches already exist in this range in the market. In such a situation, Redmi Watch can compete with Noise Colorfit Pro 3. Talking about the features of Noise ColorFit Pro 3, it has a 1.55 inch Touch HD TruView display. This smartwatch has a cloud-based watch face. Talk about connectivity, Bluetooth 5.0 has been given in it. It works on iOS and Android operating systems. Its price is Rs 4,499. At the same time, this watch will get a 210mAh battery, which gives a backup of 10 days on a single charge. This watch has a rating of 5ATM. It also has the facility of water resistant, 14 sports modes and calling-SMS.