(Sports news, MotoGP news) After 25 years since the last MotoGP race in Indonesia, this most populous country in Southeast Asia has once again become the focus of the world’s motorcycle racing village when marking the birth eye of the Mandalika international racetrack last weekend. MotoGP riders had the 2nd race in an unforgettable season in the rain here.

A pleasant surprise happened during the ranking run when on the first row were all new names. Carlos Tatay, the driver who has gone through 33 starting stages in 3 years, won the first Moto3 pole, followed by Diogo Moreira, the Brazilian rookie of the 2022 season (unfortunately he had technical problems and had to start at the end of the group). ) and the host driver, Mario Aji, was given the opportunity to race by Honda Asia at this stage.

However, when entering the main race, the heavyweights for this year’s championship are the focus of attention.

Foggia’s experience and class is on display

Dennis Foggia started sixth, but it only took three laps for the Italian driver to take the lead and have taken full control of the race ever since.

Foggia at one point created a gap of more than 5.5 seconds against the 2nd, from there to go to the first victory of the year easily. This result helped him temporarily rise to the top of the individual rankings when the other main opponents, Sergio Garcia only finished 4th, missed the podium in the last bends, and the winner in Qatar, Andrea Migno had a serious collision. sorry for Ayumu Sasaki in the final round and then left Indonesia empty-handed.

Izan Guevara finished 2nd from the starting P8, winning the 2nd career podium. While the driver won the pole, Tatay sometimes fell to P14 (round 14) due to a penalty, but in the end he still finished 3rd to get the first Moto3 podium.

The organizers announced right before the Moto2 race that it will only take place 2/3 of the distance, ie 16 (instead of 23) laps, due to concerns about unsafe race conditions due to hot weather and not yet. No racer ran the test and there is no Michelin tire data on 100% of the race at Mandalika. 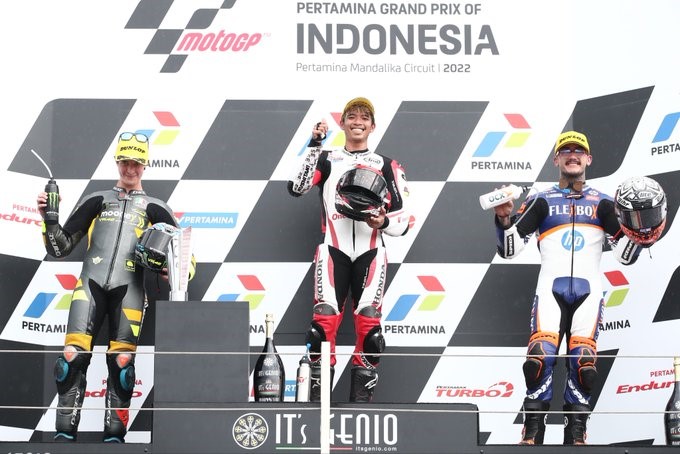 Chantra (centre) goes down in history for Thai motocross

Back to the main event, Jake Dixon in the 46th race at Moto2 had the first pole, defeating Augusto Fernandez and compatriot Sam Lowes. Meanwhile, in the top 2 opening stages, Celestino Vietti and Aron Canet only started 7th and 13th respectively.

Everything changed dramatically in the first round when Canet improved 9 places to rise to 4th, Vietti also quickly entered the top to be able to maintain the No. 1 position on the individual chart.

However, the focus of the race belonged to a Southeast Asian driver of the Honda Asia team. Thai driver, Somkiat Chantra, started 4th and rose to P1 right from corner 1 after an excellent departure. He gradually created a safe distance and dominated the race. Thanks to that, he finished first with a gap of more than 3.2 seconds and went down in history when he became the first Thai driver to win a MotoGP race.

Vietti finished 2nd to continue to lead the individual rankings after rising in the 9th round against rival Aron Canet, who also has the 2nd podium in 2 stages this season. 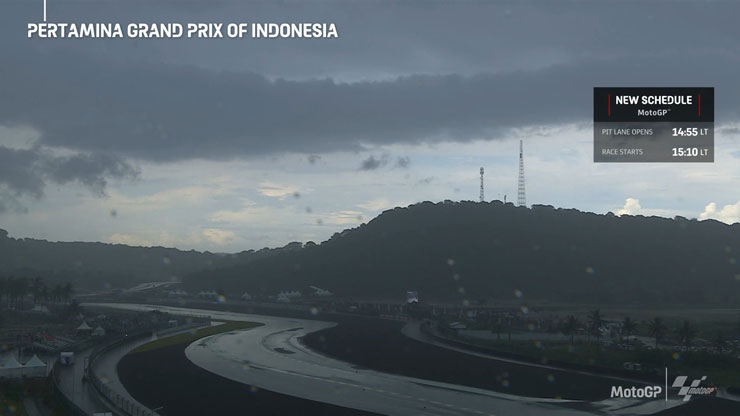 For the same reason as the Moto2 race, MotoGP will also take place in 3/4 of the distance compared to the expected, ie 20 laps.

2021 champion Fabio Quartararo returns from a disappointing race in Qatar with 16th pole in top form. Behind the wheel of Yamaha are still competitors from Pramac Ducati, Jorge Martin and Johann Zarco, while the winner of Lusail, Enea Bastianini, started 5th.

Marc Marquez had a fatal crash on corner 7 during his Warm-Up run on Sunday morning. He was then taken to the hospital for a check-up due to a diagnosis of concussion. Due to this condition requiring monitoring for the next 12-24 hours, the Honda champion was unable to participate in this race. The skills of the racers are challenged

The MotoGP race had to be postponed for 75 minutes due to heavy rain falling on Mandalika, which made all previous data about this track meaningless, depending entirely on the ability of the riders.

Chaos ensued from the very beginning, Quartararo departed well but that didn’t help him keep the 1st place as Miguel Oliveira and Jack Miller from P7 and P9 showed confidence in wet conditions, and soon took the first two places in the first rounds.

Quartararo made two mistakes in a row that dropped him to 5th, while Bastianini was even more disappointing from P5 falling outside the top with points. Oliveira and Miller competed directly for about 5 laps before the Portuguese driver showed more stability to create distance with the next drivers. Miller also failed to keep up the pace and let Zarco and then Quartararo pass. The defending champion had a well-timed comeback to return to P2 when the race had 4 laps left, but Oliveira left the gap more than 3s and the situation was considered to be arranged. 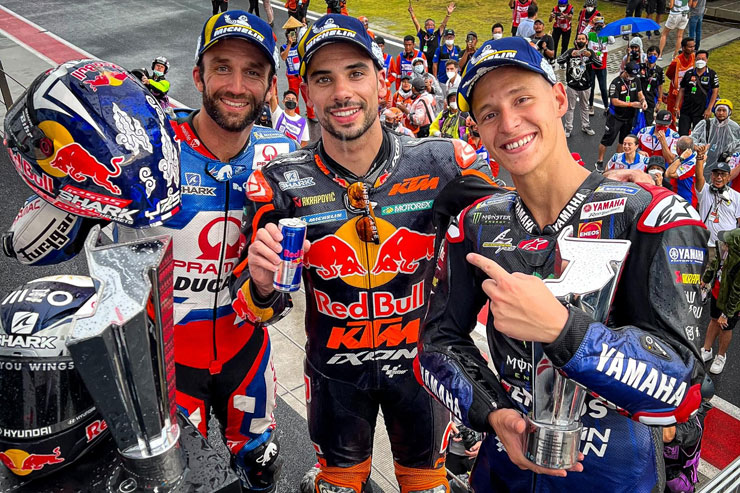 In the end, after 20 laps, driver KTM #88 had the 4th victory in his MotoGP career, the first time since CatalanGP 2021. This result helped him enter the top 4 of the individual rankings with 25 points obtained in Indonesia.

Although Quartararo didn’t convert the pole into a victory, he still celebrated P2 as an important victory in his goal of defending his title. Zarco took the remaining place in the top 3, returning to the podium after 12 races.

Behind, Bastianini made great efforts but only finished P11 but still led the individual rankings with 30 points. Brad Binder finished 8th to maintain 2nd place with 2 points worse. The reigning runner-up Francesco Bagnaia continued to disappoint with the P15 position, and only 1 point after 2 stages.

Farewell to Asia after the opening 2 stages, MotoGP will fly to the Americas with the next 2 stages, starting at the Termas de Rio Hondo racetrack, Argentina from April 1 to 3. 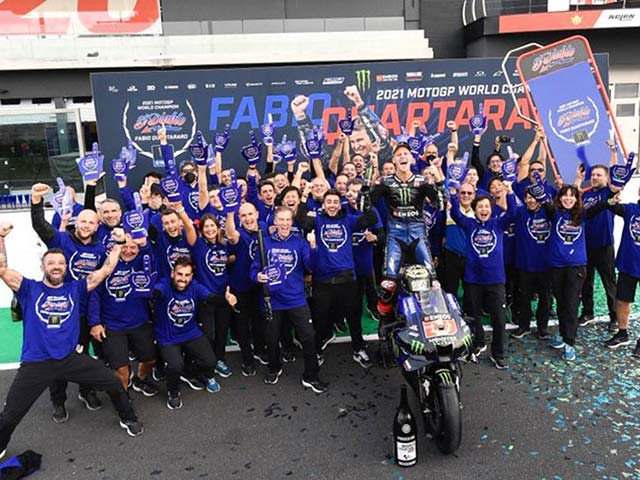 (MotoGP racing news) An emotional race that ended in all 3 formats with a twist in the championship race. At MotoGP it was a 1-2 win for Honda, the split…