(F1 racing news) Formula 1 2021 will close with 2 consecutive races in two weeks in the Middle East. Opening, Jeddah Corniche Circuit will first participate in the Saudi Arabian GP tournament. Hamilton can bring the fight back to the starting line, or opponent Verstappen is ahead.

It’s been more than two decades since the race to the championship is so close, when the gap between the two leading drivers has narrowed to 8 points after Hamilton’s 2 consecutive victories in Brazil and Qatar. Now, it is almost certain that this war will be decided in Abu Dhabi. But its severity depends a lot on what happens at Jeddah Circuir this weekend. The point is, this is a completely new race, when it was first held in Saudi Arabia, and like Qatar, they come here with empty hands, everything will be ” learn” during the test session on day 6.

The main battle throughout the season…

After Red Bull’s dominance at the start of the season, they are strong not only in the straight but also in the bends. Mercedes gradually returned with its upgrade packages, starting with the race at Silverstone. Then in 2 of the 3 most recent races, the racing team showed its terrible strength. And now, the speed of their car is slightly better than the opponent. It comes from tweaking the settings package a bit differently from the beginning of the season, more importantly, this change comes at the right time, so that the team is back on the winning streak and has a chance to completely defend the title in the race. their own control.

Mercedes is very confident after winning consecutively. They say the W12 has given the team a great boost, as it has demonstrated very high performance on the track, almost the best it has shown since the start of the season. Plus the talented and experienced Hamilton driver, especially the ability to adapt to a new racetrack, who can push to the limit, or more…. performance that a car can achieve! And when the race for the throne is open again, the German team knows what it takes to win!

Red Bull is facing a great challenge from the opponent. In Brazil they are completely inferior to Mercedes, coming to Qatar, it seems that Red Bull does not have the most optimal installation package possible!!!

The data shows that the Losail Circuit has 16 corners, most of which are medium and high speed corners where they can race with their opponents. The main feature is the low-speed corner 6, where the car needs to have aerodynamic characteristics different from the rest of the track. Here, Mercedes somehow satisfied this ‘condition’. It caused Red Bull to try to adjust, but throughout the weekend, from the test session to the main race, when going through corner 6, they were always behind the opponent by more than 0.2 seconds – with a The car has the same power, at a corner, or more broadly, a sector, which is a time gap that is almost impossible to catch up with the opponent. Calculating the total time of 1 lap, the slower distance is nearly 0.4 seconds. The task of the engineering team is to find a solution to improve the speed and performance of the RB16B for this weekend’s race.

Red Bull also confirmed they will not use a new engine, along with a penalty for Verstappen in the last two races. As is known, the W12’s engine will gradually decrease in efficiency over time, and Mercedes has given Hamilton an internal combustion engine in Brazil, pushed to the maximum efficiency without being too concerned about longevity when The season is coming to an end. The Austrian team is different, their engines have stable output performance throughout the life, and with that comes high reliability. So clearly, Red Bull doesn’t plan to use a new engine with powerful performance, and with it comes risks.

Red Bull is preparing the best for the final battles, starting at Jeddah with the goal of winning to maintain championship ambitions. But they will face a mighty Mercedes, a Hamilton full of desire to win. It will be a difficult situation for all. 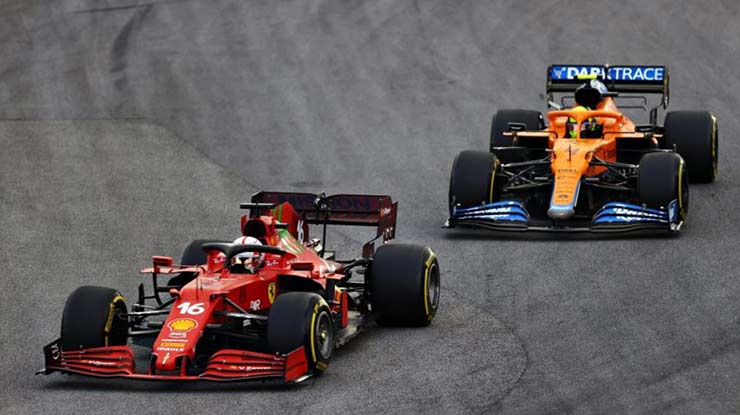 … and the competition is no less competitive.

The championship battle is still open. And besides that, there are many other competitive screens. For example, Bottas is only 13 points ahead of Perez, and there is no guarantee that the Finnish driver will finish the final season for Mercedes with an individual 3rd place.

The next competition is even more attractive, Norris is in the top 5 (with 153 points), but now the gap is extremely thin, he is only 1 point ahead of rival Leclerc. If McLaren cannot bring the best car to the young British driver, he may even be surpassed by the second Ferrari driver, because Sainz is only 7.5 points behind. What Norris needs now is to regain the form he had at the beginning of the season, where the driver owned 4 podiums, won pole once and was close to winning in Russia. He is full of determination to maintain his rank until the final race, not only for an individual position, but with teammate Ricciardo to help McLaren regain the 3rd place team!!!

That is not simple at all, because the distance of 39.5 points is more than Ferrari’s, mainly from the last 3 races, where McLaren is almost no longer himself! Since the victory in Italy, the racing team gradually lags behind to let the opponent pass.

In the context that the podium almost automatically belongs to Mercedes and Red Bull, it is possible for McLaren to earn about 20 points for each stage in the last two races, but just enough for them to close the gap with the opponent – which watching waiting for an empty opponent in both Jeddah and Abu Dhabi is unlikely. On the other hand, AlphaTauri’s Gasly is always present in the top, a little advantage can also help this racer overcome all.

Remind to see, how difficult it is for McLaren to turn the situation around. But there is still hope to fight, this British racing team is looking back at the mistakes that prevented them from achieving good results in the past races, taking it as a lesson to prepare for the last 2 races, with ambition. Hope toppled at the last second!

Even if the result is not worthy of a prestigious and ambitious racing team like Ferrari. But if you look back at a bad year 2020, at least up to this point they have partly demonstrated their strength. Especially in the context that almost all resources are being focused on the new season with hinge changes.

Leclerc racer is feeling each upgrade has brought significant effect. It was he and the Italian team that experienced the worst 2020 in their 4 decades, so the current strength they are showing has many positives.

Sainz, even though he has only been with the team this year, has adapted very quickly to the new team. This Spanish racer spent many hours working with Ferrari to effectively improve and upgrade the car step by step. The main result is that he owns the longest scoring streak of the season with 13 consecutive races.

All of that helps Ferrari to be far ahead of rival McLaren, and the chance to win 3rd place in the race is almost certain. Not only that, if the opponent doesn’t show real competition, the Red team’s steering duo also has a chance to beat Norris for individual 5th place – and they really deserve it, even if that happens, it will also be a pity for the McLaren driver.

At Jeddah weekend, McLaren’s door is quite small, if they can bring the team competition to the last stage, it will be a success. If Ferrari ends the game, it won’t be a surprise! 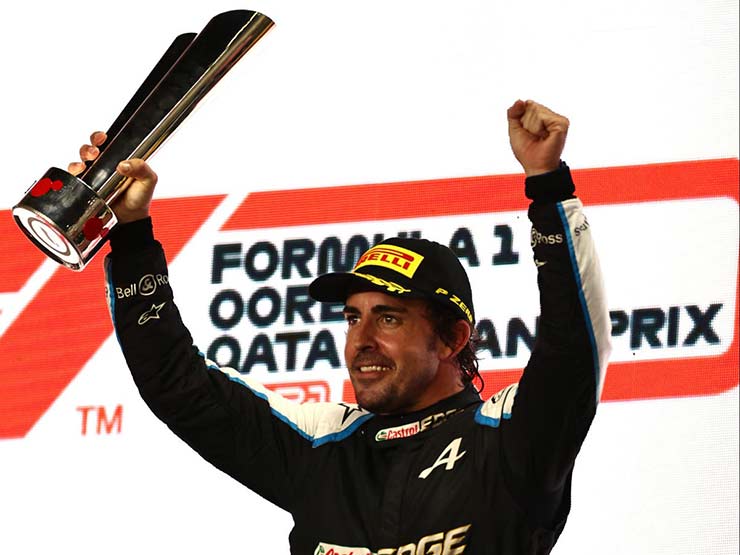 Alonso excellent back to the podium.

If 39.5 points is a gap that is quite difficult to level with McLaren, adding that valuable points are often acquired by Mercedes, Red Bull, Ferrari and McLaren. This is synonymous with the rank and strength of Alpine and AlphaTauri and the 25-point gap with the advantage of the French racing team, a ‘mountain’ that is almost impossible to overcome.

It all stems from the outstanding performance of old general Alonso and podium in Qatar, as well as Ocon’s 5th place. In order to equal points with the opponent, they have overcome a safe enough distance at the present time. Numerologically, Alpine is not certain, but reality shows that, if this weekend AlphaTauri does not significantly close the gap – meaning 5th place will belong to the French racing team. The last group doesn’t have too much to say about them. The highlight, will be that Williams wants to end the series of 5 consecutive races empty-handed, by scoring in this race, because the value of the score does not lie in helping them maintain their rank or not! That’s what this team will strive for, in memory of its founder – Sir Frank Williams – who passed away last Sunday at the age of 79.

There will be a lot of “duels” on the Jeddah circuit this weekend, which, while not the endgame, will be worth watching, given there are so many fights along the way. Can Verstappen widen the gap, or Hamilton continue to win at a new track, as he has so many times. Watch the Saudi Arabian GP 2021, the tournament will start with a test session at 8:30 pm on Friday, and the qualifying race on Sunday morning, at 0:00 on December 5. 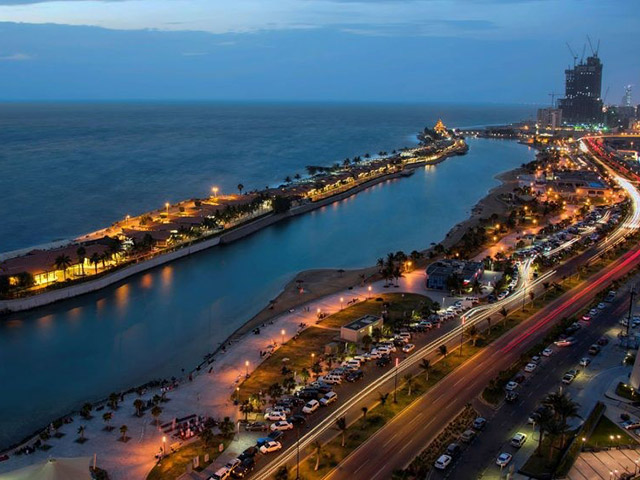