In the heat at Sakhir, the 3rd test session took place only 15 minutes after the green light at the pit was on, the timeline kept changing. Max Verstappen topped the standings with a time of 1 minute 32,544 seconds, just 0.096 seconds faster than Charles Leclerc’s best lap, improved after a splash over the gravel on the 11th corner.

Sergio Perez is in the top 2, 0.25 seconds behind his teammate. The Mercerdes duo took 4th and 6th place, with Russell 0.2 seconds faster. The gap in 5th place is Carlos Sainz with a time of 1 minute 33,053 seconds.

Haas and Alfa Romeo had a good beat in this FP3. Kevin Magnussen ranked 7th, slower than the mark of 0.893 seconds. Followed by the duo Valtteri Bottas and rookie Zhou Guanyu. And last in the top 10 is Aston Martin’s Lance Stroll.

Last-minute entry Nico Hulkenberg had the 12th fastest time, ahead of FP1 lead Pierre Gasly. Meanwhile, Yuki Tsunoda had a problem with the hydraulics, and the car was in the garage for most of the ride. 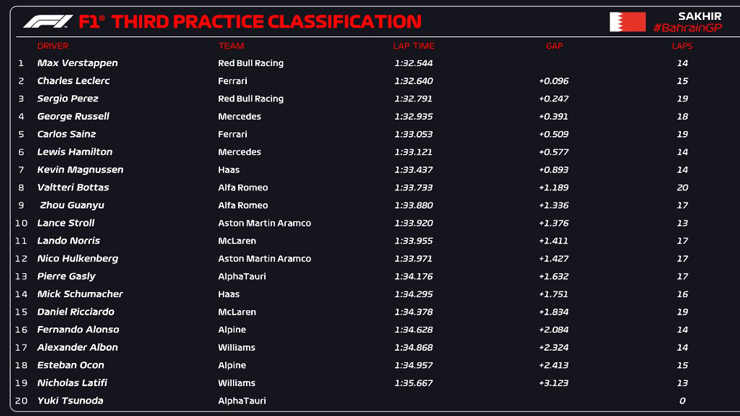 By the afternoon session, the atmosphere was much more tense. In Q1, 2 Ferrari drivers soon topped the standings. And neither of them needed to return for the 2nd round. As well as Max Verstappen in 3rd place, 0.3 seconds behind Leclerc.

Bottas is still in the top 4, and Magnussen is in the top 5. Ocon had a different first split from FP3 before, and had a 6th fastest time. Gasly continued to have a good lap in the draw, and broke into the top 7. Lando Norris is the 8th fastest, surpassing both Mercerdes drivers.

Tsunoda had problems with the hydraulics before, didn’t have a good enough lap to get into Q2. The Aston Martin duo had to stop at 17th and 19th places. In the middle is Ricciardo, the new driver who recovered from the Covid-19 virus. And Lafiti is the last name to be dropped from Q2.

Verstappen returned to the top of the leaderboard in Q2, and rested in the pit as Sainz and Leclerc returned to the track to take second and third. Perez finished in fourth, two Mercerdes ahead. Magnussen entered Q3 continuing in 7th place, but suffered hydraulic problems later. Magnussen had a problem but still shined in the ranking

Alonso and Gasly ranked 8th and 9th respectively. And the last name in the top 10 is Bottas. The Finnish driver has not missed a Q3 session since Abu Dhabi 2016. That means Ocon, Schumacher, Norris and Zhou have to stop at Q2.

Drivers moving into Q3 are no longer limited to their tire selection in the main race, and Soft tires are a must in this final session. The Mercerdes duo opened with Russell dragging Hamilton, but neither was enough to break into the top four.

Sainz led Leclerc in the first round, but coming back for the second time, Leclerc improved and rose to win the pole in this Bahrain. Verstappen followed behind 0.123 seconds, and Sainz added 0.129 seconds behind. Perez promptly participated in the duel in 4th place. Bottas accompanied his former teammate in 6th place.

Magnussen remained Haas’ bright star in this ranking, taking 7th place and starting ahead of Alonso. And at the bottom of the top 10 are Russell and Gasly. 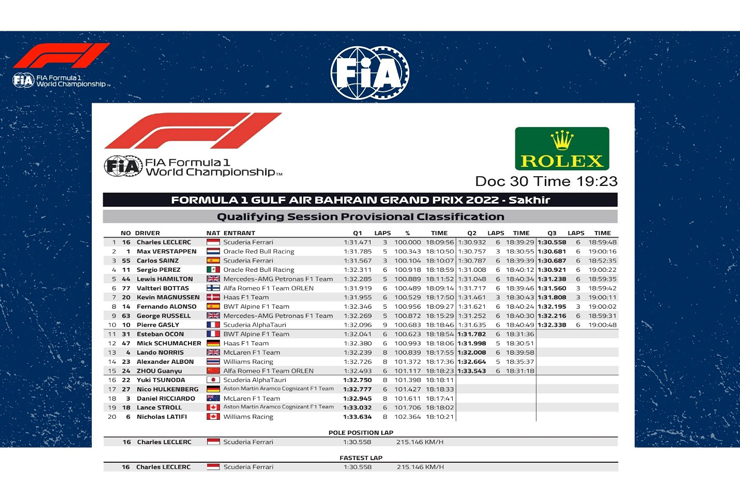 Things are getting more and more interesting. Exciting duel on the top 2 with the participation of the defending champion, and not including “Silver Arrow”. Can Mercerdes claim their first win of the year? And can McLaren bounce back from behind the race? Formula 1 Gulf Air Bahrain Grand Prix 2022 will return at 10pm on March 20 with the official race events. (Sports news, F1 racing news) More than 3 months since the most exciting F1 season of the turbo hybrid era ended, the audience is looking forward to a new year with a technical change bringing…