(Sports news, F1 racing news) Red Bull flies high, and Mercedes is the chase – it’s an event that doesn’t always happen. Baku Circuit weekend will usher in a true fight for the 2021 throne, and how long it lasts, depends on Red Bull.

Nearly 3 years, is the time when Mercedes prepares for the next race in a different position. Since the 2018 German GP, ​​for the first time, they are not the leading team in both the individual and team rankings. It all stems from disappointing results in Monaco more than a week ago, where only Hamilton brought 7 points and an unfortunate incident on Bottas’ car.

There’s a battle for the throne ahead…

Surely Mercedes will be determined to return to competition to prove Monaco was an “accident”. The same street racing format, but the Monaco is more suitable for the character of the R16B, while the Baku Circuit is similar to the design of the W12. Although it has several sections, the track is only about 7 meters wide. But in the 3rd partition (Sector 3) is a straight segment of more than 2.2km, where Mercedes will maximize their power.

The German team understands that the performance of the aerodynamic package for the race is paramount, the track characteristics do not require high grip and drag, so they will definitely use a smaller version of the rear spoiler to optimize. efficiency. One more important factor, maintaining optimal tire performance to be able to create an advantage over the opponent.

Hamilton expressed displeasure about a race they performed poorly. And there’s nothing better than responding to it with a win this weekend. Is it easy for Red Bull to ‘give up’ the opportunity they have, though uncertain!?

The Austrian team, very realistically, considers Monaco a special case, and they are still really behind the competition. Red Bull is very awake with what is available. In the past, they always set the goal of winning a specific race, not set a ‘long-term’ goal for the championship. Now, in a different position, they will have to consider…

Verstappen said that he and the racing team will have to be careful not to make mistakes that lead to nothing. A long-distance race is not risky in terms of scores, not scoring with an opponent in the top 3 is a huge gap in points, from 15 to 25 points.

So Red Bull and their top drivers determined, will aim to score maximum points through each race, and compete for victory if possible, with the goal of the championship title. As the first Dutch driver to top the standings of the season, Verstappen also aspires to his first career win at Baku. If that turns out to be true, it will keep him flying high on the leaderboards! … and a showdown soon after.

At the back, Ferrari had an impressive result at Monaco. Leclerc won the pole – although he was unable to start because of a technical error. But Sainz had the first podium with the team. So they’re really back!?

Remember, their 2020 engine performance is very low, in addition to Mercedes, they are inferior to both Honda and Renault. Up to this point, according to experts, Ferrari’s internal combustion engine performance is still about 20 horsepower behind Mercedes and close to catching up with Red Bull. But there are positive signs, when the ERS energy recovery system is rated as the most effective among engine suppliers – a success knowing that from the middle of the 2020 season, they have begun to build a code. New engines for this season and the next.

The positive results at Monaco could have been foretold, this track is a perfect fit for Ferrari. According to statistical data from the beginning of the season, SF21 is the car that always has the highest average speed at corners, especially low-speed corners. And this advantage, plus the characteristic of the Monte Carlo racetrack – where only about 60% of the engine efficiency is used – Ferrari’s success is inevitable.

In general, the Italian racing team is inferior to the two leading racing teams, but they are able to compete with McLaren – the opponent who has always been in the top in all the past races.

McLaren in Monaco for the first time failed to finish the race with both drivers scoring, after Ricciardo went empty-handed. But this team is showing that they can be challenging at all races. And Norris has owned 2podium since the beginning of the season – an achievement that shows it is not natural that McLaren ranked 3 seasons ago, and still holds this position, despite being subject to great competition from Ferrari. Baku will have higher speed, which is a big advantage for the British racing team, especially with the Mercedes engine, they will still be a difficult opponent to play!

Similar to the 1-2 battle, the McLaren and Ferrari duo will create a positive competition for the 3-4th place in the next races, McLaren continues to assert or be overthrown – perhaps the holder The answer is Ferrari. In addition, the duo still holds the opportunity to challenge the podium with the two top racing teams mentioned above. 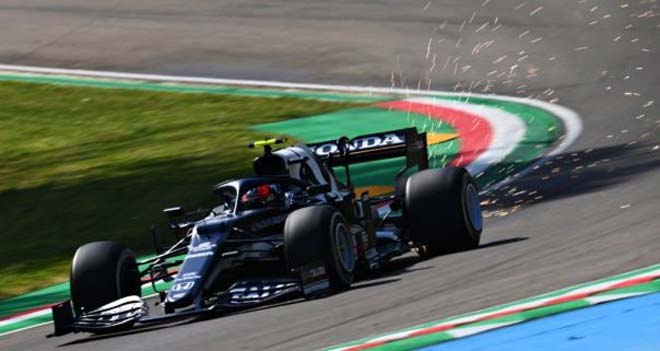 Gasly is expected in Baku

In the pre-Monaco review, we mentioned that the ranking of the average group of racing teams can completely change the order after only 1 race. And the fact that Monte Carlo did this order swap.

Aston Martin rose to the top thanks to the brilliance of Vettel with 5th place. AlphaTauri also looked to Gasly to maintain 2nd place in the group. On the contrary, while Alonso is confident that the team car can compete, not only in the middle but McLaren and Ferrari, reality shows that – in Monaco, they are far behind their peers, not just rivals. hastily compared with ‘on top’ competitors.

Before this stage, more modestly, the former champion argued that the A521 was not compatible with the characteristics of Monte Carlo and Baku. So Alpine is only really stronger when it comes to Frech GP after more than 2 weeks.

By maintaining their 6th place, when the opponent was Hamilton throughout the race, Gasly and AlphaTauri had reason to be confident in this race. The data shows that this team can approach the speed of the top, if the Ricciardo, Perez, Sainz, Leclerc … do not perform in the right form, a position in the top 5 for Gasly is possible.

Overcoming the top of the middle after the last race, but Alpine’s chances in Baku may not be many. Although it is street racing, it is easier to overtake opponents than Monaco and Singapore. It will be difficult for Vettel to maintain its position in the face of pressure if the AMR21 does not achieve optimal performance. Tactics will also play a big role in this race.

With a very small difference, from 17 points (Alpine) to 19 points of Aston Martin. There will be another position swap after the end of the Azerbaijan GP – Definitely!!!

There is not too much to say about the 3 bottom teams, although Alfa Romeo has the first score, but their strength is difficult to squeeze into the top scorers. The chance to get points for them only comes when there are too many mutations on the track. Perhaps the most suitable goal is to reach the 2nd qualifying round and finish the race close to the top 10. The Baku Circuit is a special type of track, a long straight line from turn 16 to turn 1, in addition to a series of 90º turns. It requires both compression and traction of the tyres. The road surface temperature drops quickly after the race starts, and if there is a safe car, returning to the race always creates chaos as the tires cool down and lose the necessary grip. To win, teams need to find the best set-up for one of the most challenging races of the season.

Mercedes knows what it takes to stay on the winning track. But when given the opportunity, Red Bull wants to do the same. In addition, there are those who aim to overthrow the position in the following groups. All will make Azerbaijan GP weekend more attractive. Watch the race at Baku Circuit at 19:00, Sunday, June 6, 2021 (Vietnam time). (Sports news, F1 racing news) The sixth round of the 2021 season brings drivers to Baku, Azerbaijan. Designed by…