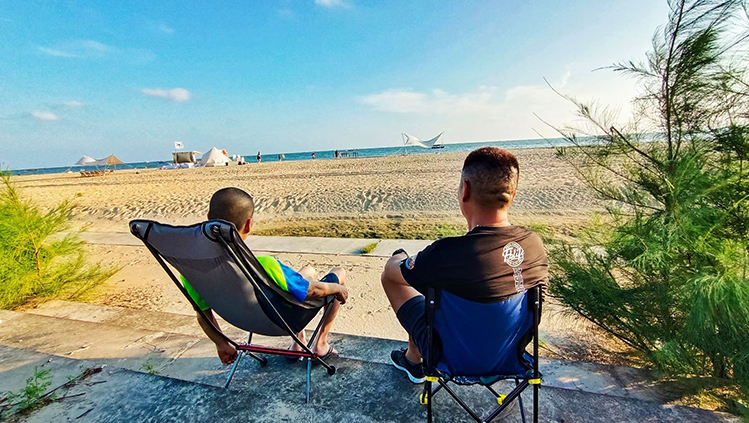 The trip departed on October 2, Ha Tuong Man and Luong Thanh only knew the direction but did not have a specific route, because it depended on the patient’s health.

With the luggage of two guitars, a drum and tent, sleeping bag, pots and pans, the two set off from Zhuzhou, Hunan province to the south. “First go to the waters in Guangxi, then go all over Yunnan, Guizhou and Sichuan,” 54-year-old He Xiangmin told a friend.

A month ago, Luong Thanh, who had just turned 53 years old, received the terrible news that he had terminal tongue cancer. Mr. Luong quit treatment, wishing to travel around the country to “live the last days of his life meaningfully”. This aspiration was responded by Ha Tuong Man, a former classmate and also a restaurant owner.

A day before departure, Ha wrote on her personal page: “From tomorrow, my brother and I will fulfill his last wish: Wandering around the world. Having a day to go but not knowing when to return. “.

They have 20 days to prepare. On September 30, Mr. Ha bought a used car for 25,000 yuan (88 million VND). The owner of the auto repair shop stayed up all night for maintenance and a local policeman actively completed the paperwork of the car.

The next day, he removed the rear seats and put in a mattress enough for one person to lie down. The car also has a tent, sleeping bag, power bank and flashlight. On the day of his departure, he had only 3,000 yuan in his pocket. Friends know the story, support both of them another 6,000 yuan.

On October 3, after a day of traveling, they stopped in Yangshuo, Guangxi province. Here, Mr. Ha set up a tent in an empty lot to spend the night, and Mr. Luong lay in the car. The next day, they went to Dongxing City and camped on a beach.

“Here, the water is blue and the scenery is beautiful. During the day we walk along the beach and talk. At night we play and sing and watch the stars,” Ha wrote in a diary. This land seems to meet Mr. Luong’s expectations, from the poetic scenery to the few passersby.

Previously, Mr. Luong told his friend his dream of traveling by motorbike around the country. They planned this trip as soon as possible. However, by September, his health declined, and his walking was not stable. At this time, Mr. Ha told himself, besides leaving immediately, otherwise there would be no other time.

On the way, Mr. Luong’s health was very weak, often lying in the back of the car, getting a little stronger before sitting on the passenger seat. No matter how annoyed, this man did not say a word.

Knowing your pain, but Mr. Ha doesn’t want to convince you to stay at home, but only tells you when you can’t stand it, say, both of you will come back. “If you die on the road, I will definitely carry you back,” said Mr. Ha.

Every time he stopped the car, Mr. Ha often chatted with locals, asked if there were any beautiful scenes around, what delicious food, he drove his friend over. “The sole purpose of this trip is that we want to live and live the best days,” he wrote.

Ha Tuong Man and Luong Ha were originally high school friends but were not close, because of their opposite personalities. While Luong is gentle, introverted, and good at studying, Ha is an extrovert who likes excitement. Eight years ago by chance meeting again, they discovered that they have many things in common, the biggest being the interest in travel.

After that, the two met almost every day. Three years ago, Mr. Ha divorced, carried the suitcase out of the house. Mr. Luong, who has been divorced for 10 years, lets his friend stay in a rented room. Because the house did not have enough beds, Ha had to stretch out a tent to sleep, lived like that for a year and a half, then separated to live separately. However, when Ha was in trouble, Luong was ready to withdraw all the money he had for his friend.

Five years ago, Mr. Luong applied for a 20-day leave to ride a motorbike with his friend from Hunan to Guangdong, then to Fujian, Jiangxi, over a distance of more than 4,000 km. “We have promised that the next trips will continue to go together,” said Mr. Ha.

On the 8th day of the trip, due to a storm, they had to leave the beach in Dongxing to stay at a friend’s hotel. During these days, Mr. Ha buys some sea fish from local people and stews it into soup for Luong to eat. “Now that he can’t chew anymore, this is the best way.” Sometimes he still cooks rice, but it all has to be crushed.

Upon learning of the two’s trip, their friends appealed for support, but both refused. Mr. Ha said that they just want to find peace, not so difficult that they need help from everyone.

This man said, there are also two sleeping bags in the car, in case the weather drops to minus 20 degrees Celsius. “We will go everywhere no matter what the weather, until Luong can’t stand it anymore.” Ha confirmed.