Video of the situation of a blow that causes the opponent to fall over:

In two consecutive martial arts events, frightening injuries occurred with fists. On February 25, at the boxing tournament in Africa, the match between Yann Lenvo and Wasim Chellan had a scary knock-out.

Chellan fell back down as if breaking his back

In the third half of the match, Yann Lenvo missed his opponent and lost momentum. Taking the opportunity, Chellan counterattacked with a “heavenly” punch, Lenvo fell into a state of unconsciousness, his body leaned freely backwards as if breaking his back. After the fall, Lenvo was immediately taken to the hospital, currently the tournament organizers have not announced the puncher’s injury.

Video situations where the opponent kicks his leg:

Two days after the scary knock-out phase, the MMA event in Australia Urban Fight Night 24 took place on February 27 also had another knockout phase that was equally discussed. The showdown between Randall Rayment and Dean Maxwell ended after 24 seconds. 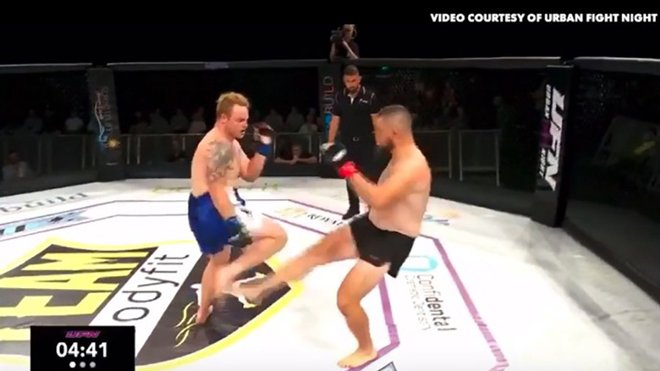 Continuously attacked by the opponent with a “banging pipe”, Maxwell painfully missed the floor, which caused him to flip his ankle. The whole body was pressed down on the ankle in the accident, causing the Australian puncher to suffer terrible injury and had to quit the game.

Tournament promoter Suman Mokhtarian revealed that Maxwell had broken both a fibula and a tibia bone, had a nail brace surgery and was unable to walk for three months.