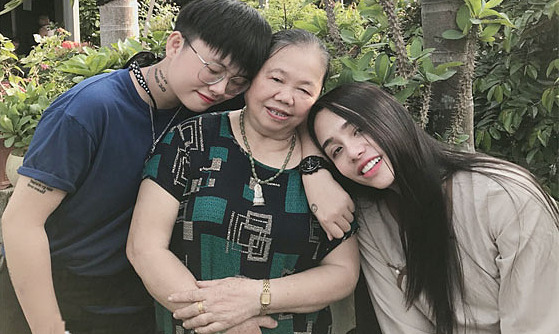 More than 10 years ago, when she received a phone call from a relative saying that her son was actually a girl, Mrs. Tran Thi Tham cried and collapsed because she did not believe it was true.

A 53-year-old woman in Hai Phong city said that after getting married, she gave birth to a son and a daughter. Le Kim Tung, the eldest son was born as a plump, lovely child. Yen Nhi’s daughter has beautiful, long shiny hair. “I am extremely satisfied,” she said.

But being a boy, Tung only likes to play with toys, dolls and is shy. And her daughter Yen Nhi does not like to wear skirts and wants to cut her hair short with a nail head. Friends and relatives all say that her children are different, but the mother thinks they are children, their interests may change as they grow up.

But the older he gets, the more he lives true to his inner nature. People around said again, but Mrs. Tham dismissed it. “I don’t want those thoughts in my ears,” the mother said. When Tung was 20 years old, when she heard that her son was wearing chalk, wearing a skirt to speak to a girl, Mrs. Tham was in the bathroom and immediately rushed to the wall, her family had to unconsciously carry her out.

“I once committed suicide but was saved by relatives in time. Can’t accept Tung as a girl,” the mother recalls.

Shock, pain and resolute refusal to accept reality like Mrs. Tham are psychological developments of many parents when they learn that their child is of a different sex from the outside appearance. “Some people take their children to see a psychologist, offering to treat their children. But I say, the people who need psychological adjustment are them, not the children,” said psychology master Nguyen Thi Tam (HCMC). speak.

“Although they are a minority, this is their true gender identity and sexual orientation. Family, friends and society can neither accept nor change it,” said Mr. Huynh Minh Thao, a rights promotion expert. LGBT Vietnam, said.

Thao said, like Mrs. Tham, many parents because of their limited knowledge of the LGBT community, they think that people like their children are living a deviant, unnatural life. “Another cause is the wrong view of society towards the life and image of LGBT people. For example, they are described as living disorderly, depraved, no future, old age and anchored. simple, while the reality may be the opposite,” said Mr. Thao.

Mrs. Tham and her husband used to use whips to shape their children. Father forced Tung to “eat loudly, speak loudly”, loud and strong. Once, Mrs. Tham bought a very nice cow dress for her daughter Yen Nhi, but the crying child refused to wear it. “I beat him so hard that he would wear it, but only worn it once,” she recalls.

In many cases Mr. Thao came into contact with, parents also used more serious forms of violence such as detention, beatings, starvation, even taking their children to make spells, give them medicine… to live like their gender. outside. “A mother in Ho Chi Minh City also took her child to psychiatric treatment for 10 years. Until the mother gradually accepted that the child was not crazy but gay, the son had real mental problems,” he said.

In the study”Is it because I’m LGBT Posted on the website of the Library of Congress, based on a survey of nearly 2,400 people, more than 62% said they were forced to change their appearance and gestures by their family and 60.2% were scolded and pressured.

A study conducted by CCTHP (Center for Initiatives and Health and Population) and iSEE (Institute for Social, Economic and Environmental Research) in 2011 on violence against gay men also showed that there were 13 in 17 cases of domestic violence by family members. All 17 cases in the study experienced some degree of depression.

Like Mrs. Tham, Mr. and Mrs. Tran Van Nam, from Dong Nai, do not accept when their daughter brings a girl home to introduce as a lover. He scolded and beat his son, causing him to torment himself for being unfilial. To please her parents, Thu Hong went to get married. But two years of marriage is like hell. She was always afraid when her husband wanted to be close. Hong is divorced, lives as a man and openly loves a girl.

Nam and his wife fell into the abyss. A beautiful, talented daughter, married to a Korean husband, suddenly divorced and turned gay. Grandparents left their children for two years in a row, until Thu Hong threatened “if you don’t let me get married, I’ll die”. “Well, it’s better to bring the bride back than to do the funeral for the child,” he said.

To change her mother, Tung (who changed her name to Kim) quietly introduced her mother to the LGBT community for her to learn. “It turns out that a lot of mothers suffer like me, but they still accept to let their children live,” the mother said.

Not agreeing but also not reacting strongly, Ms. Vu Thi Giam, 66 years old, from Thuy Nguyen, Hai Phong silently endured the pain, so that her children could live happily.

After having an eldest son and four daughters, Mrs. Giam and her husband added a youngest son. From a young age, the boy liked to take away his sisters’ clogs, soft-spoken. But like Mrs. Tham, Mrs. Giam thinks of children. “When I became an adult, I told my son to ‘get married’, he said ‘I’d like to get married’, but I didn’t think anything of it,” she said.

Witnessing her son working as a worker, carrying a water purifier to install and sell to customers, the mother thought that the youngest son only had a “slightly effeminate” appearance. Mrs. Giam didn’t know that I was trying to work to save money to go transgender.

After going to Thailand, she had surgery, changed her name to Ha An, and her son called back to tell her mother and siblings. “Heaven and earth are falling apart. I’m shocked, very sad,” said the mother. She didn’t eat or sleep for a week. “I wish my children to get married and give birth to a grandchild. The wish is so simple, but it can’t be,” her voice deepened.

But encouraged by her daughters, watching online programs, the mother encouraged herself “the important thing is that the child is happy”.

In a survey of VnExpress With nearly 500 readers, 70% said they are ready to accept their child’s true gender, as long as they are happy. With 21% like Mrs. Giam, Mr. Nam was initially shocked and distressed, but still supported his son. Meanwhile, 9% (44 readers) do not accept this fact.

Psychologist Nguyen Thi Tam advises parents to learn knowledge about the LGBT community to understand, empathize and lead their children to live true to their true gender. “Why is it that when children live as their parents’ gender, they love and care for their children, while revealing their true gender is rejected, tormented, and embarrassed. If so, parents are loving and respecting their doctors. their own face, not their children’s love”, Ms. Tam analyzed.

A 2010 survey by Green Apple, a forum for the LGBT community, showed that 80% of people in this community want to be loved and acknowledged by their families. “Lat is soft and tight. I hope parents will be a spiritual support for their children, not an obsession,” said Mr. Huynh Minh Thao.

Understanding more about the LGBT community, Mrs. Tham gradually accepted Kim in the form of a woman. When her mother opened up more, Kim invited her and her brother to an event about LGBT. In that event, Mrs. Tham was invited to the stage. Standing on the podium, the woman burst into tears, saying: “I’m really sad to hear that both of my children are transgender. They can’t bear me grandchildren. But now that I understand better, I accept the change. Really, as long as you’re happy, be yourself.”

She realized that when living in accordance with the true gender, both children were happy, cheerful, and stable in the face of life’s storms. “Now I’m not sad or sad anymore. Kim has just finished sex reassignment surgery, but in my heart, she has been a daughter for a long time,” the mother laughed, said.