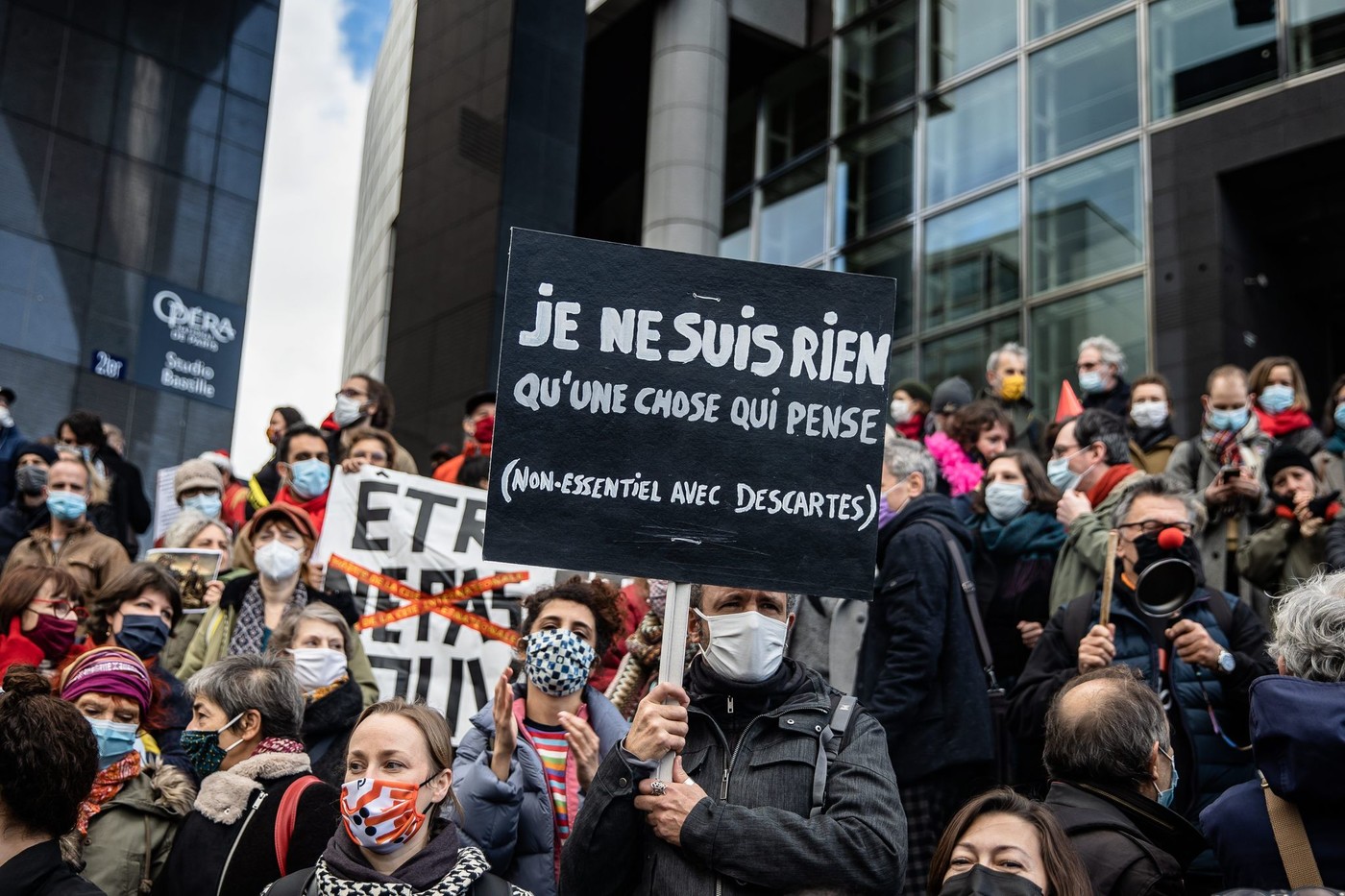 “I haven’t worked for 9 months now. We can’t wait another day: we must reopen cultural venues now! “, exclaims Thibault Sinay, president of the Union des Scénographes (USD). Like thousands of other professionals in the world of culture, the artist-technician has responded to the call of the CGT shows to gather, this Tuesday, December 15 at 12 noon, on the Place de la Bastille in Paris.

The mobilization, followed everywhere in France, comes a few days after the announcement of the postponement, of the Covid-19, of the opening of theaters and cinema by Prime Minister Jean Castex, while several appeals for interim relief are about to be filed with the Council of State to challenge this decision.

The initiative is notably led by actor Charles Berling: “If his voice carries ours, we’ll get there.” But this is our last hope! “, say Tiphanie Hamelot and Coralie Menella, two young actresses aged 25 and 27. Arrived in advance in front of the steps of the Opera, they display, on their sign, a quote from Albert Camus: “Anything that degrades culture shortens the paths that lead to servitude”.

The sacrifice of intermittent workers

On the Place de la Bastille, a feeling of injustice reigns: “We have all prepared exactly as needed and everyone knows that health protocols are often easier to respect in theaters than in public transport or supermarkets”, indignant Christophe, violinist in a large Parisian orchestra and member of the National Syndicate of musicians CGT. From the stage deployed in front of the Opera, the initiator of the mobilization, Samuel Churin, calls out to the crowd which blackens the esplanade: “The arguments of flow no longer work: we must say no and enter into resistance! ”

→ READ. The suspense of deconfinement, a puzzle for cultural places

At the microphone, two filmmakers read, to applause, a letter entitled “Contempt”. It recalls in particular the costs incurred by the cultural world with each new postponement. Because intermittents have also come to recognize their precariousness, like Pascal le Guennec who wears the colors of the National Federation of Street Arts.

Despite the “white year” device, the term of which is approaching, and the various aids released by the government, many have not earned their living for several months. “It is one more step towards social misery in this already precarious profession”, estimates Jean-Christophe Valentin, a yellow vest amateur of theater, come to support the artists.

Since the start of the health crisis, in March 2020, the cultural professions have also had to manage a “traffic jam” of shows. This is the case of Marion Souliman, responsible for distribution at La Compagnie Jean-Michel Rabeux: “It’s been months that everything is in suspense, that we foresee and that‘we constantly postpone. We are exhausted ! “. The professional also wants to remind people how essential the holiday season was, especially for the circus world, family shows or for young audiences.

The lack of visibility penalizes even more violently the professions directly linked to creation, such as scenographers or costume designers: “We can’t work until there is a new creation, which means that the day the theaters reopen, we will still have to wait a very long time! “, deplores Camille Dugas, member of the UDS.

The youngest links in the chain, the students of the conservatories have climbed the steps of the Opera to cry out their despair. “Either we are misunderstood, or we are not listened to at all”, launches Maxence Moulin, student in an establishment of the 7e arrondissement, also closed.

→ READ. On what basis will the decision to keep cultural venues closed will be contested?

With more than 200 Ile-de-France comrades, they wrote an open letter to the Ministry of Culture, which remained unanswered. The future artists are also campaigning for an imminent reopening: “This is the only solution to see a future!” “, confides the young actor.