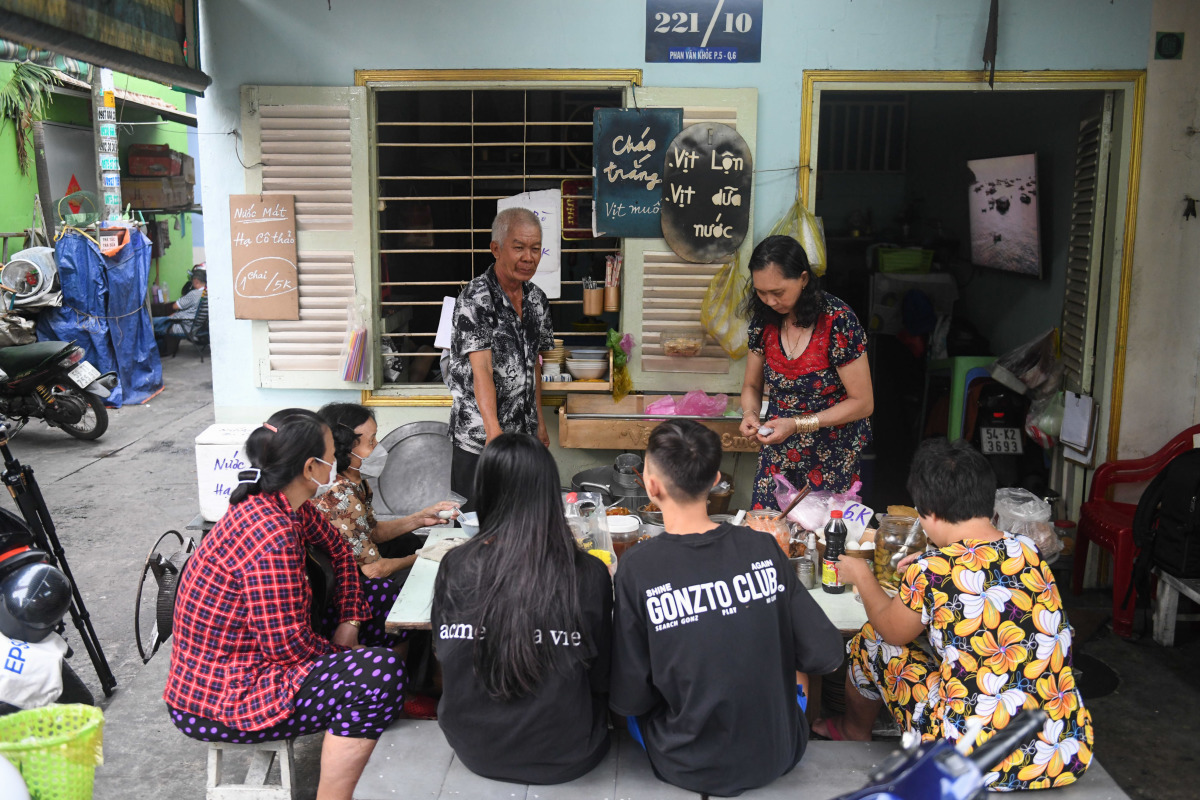 Ho Chi Minh CityFor nearly 20 years, the porridge shop owned by Mr. and Mrs. Le Cong Minh, in District 6, has kept the price of 1,000 dong a bowl, helping many poor and self-employed people to eat “full”.

On the afternoon of May 17, Mrs. Hong Tuoi, 50 years old, went to a porridge shop in a small alley on Phan Van Khoe Street (District 6) to have a snack. She ordered a bowl of white porridge with a few cooked shrimps to serve. “This much is less than 10,000 VND, of which the bowl of white porridge is only one thousand,” said Mrs. Tuoi, holding two cups of porridge and side dishes.

The owner of the porridge shop is Mrs. Tuoi’s neighbor, Mr. and Mrs. Le Cong Minh (68 years old) and Nguyen Thi Kim Phuong (55 years old). Previously, Mr. Minh worked as a bricklayer, but the work was hard but he could not afford to spend. When his wife gave birth to his second daughter, he quit his job and returned home with his wife to open a porridge shop to earn extra income.

Mr. Minh admits that the restaurant is small, the food is nothing special, when it first opened, when it was on a bad day, the whole family had to eat porridge instead of rice. “Seeing this area, most people are workers, assistants, students … so I sell at a reasonable price. Gradually, the shop has more stable customers,” said the 68-year-old man.

Before, he sold each bowl of white porridge for 500 dong, but over the past ten years this denomination note has been rarely used and the price has escalated, so Minh and his wife have increased to 1,000 dong. The dishes with white porridge such as braised pork chops, pickled fish sauce, radishes, salted duck seeds… are priced at 2,000-10,000 VND.

The shop called “Come here” also makes many customers excited to eat. The name is given by the husband “big”, because when pronounced, it sounds gentle and affectionate. Seeing that his wife did not have any comments, the name of the restaurant has remained for nearly 20 years.

The space of the shop is about 15 square meters, which is the porch used as a place to shop. The owner set up a large table to place food with white porridge, spices, lemon, chili… also where guests sit, maximum 5 people can eat together.

Inside is where grandparents cook porridge, 4 small pots are sold every day, equivalent to 4 pounds of white rice. The owner said that porridge must cook for an hour to be pureed and not mixed with flour, because it will lose the characteristic aroma of rice. The coal-fired pot always has to be red for hot porridge to eat well.

The shop is open from 15:00 to 20:00 every day but usually closes early. In addition to the support from the neighbors in the neighborhood, many guests from other districts also came to eat to tell them how the 1,000-dong congee was.

However, not everyone buys as much as Mr. Minh also sells. A few years ago, knowing that porridge was cheap, someone ordered up to 500 portions, but the owner decided not to sell it. He was afraid that if sold out immediately, there would be no more porridge for people, workers, motorbike taxis, lottery ticket sales… that day.

Mrs. Phuong, Mr. Minh’s wife, added that the reason the shop can sell cheaply is because it doesn’t have to pay rent, cooks with a charcoal stove instead of using gas, so it’s also economical. “Of course we still have a profit, but it’s not much, but we sell out every day. Moreover, we sell it for a small price, as long as the customers are satisfied, it’s a joy and motivation,” she said.

Grandparents confided, now life is also stable, children have grown up. For two people, selling porridge now is not important to profit or loss, but above all to the joy of old age, happiness when helping a part for poor workers.

“If they eat a lot, they pay more, but I don’t take it, as long as they like the restaurant, I’m happy. If I’ve known it for many years, it’s sad to retire now, so I just keep trying until I can’t anymore,” he said. Minh said.