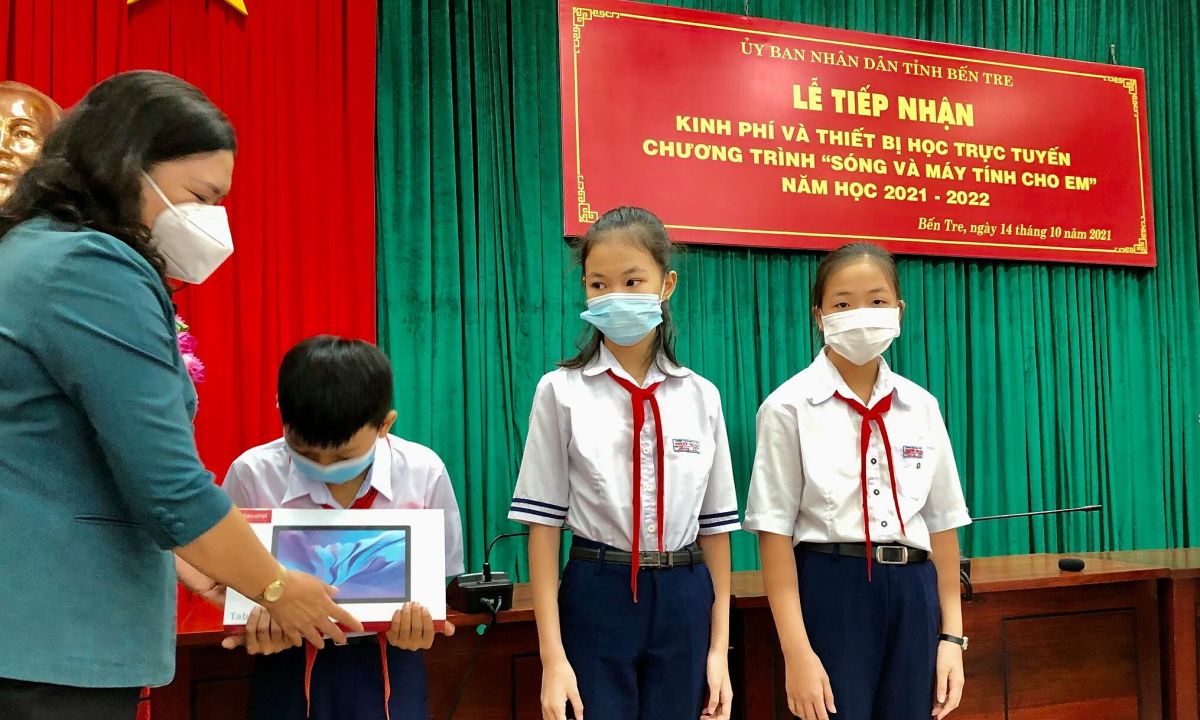 Ben treMore than 400 tablets were given by Hope Fund and FPT to poor students in Ba Tri district, on the afternoon of October 14.

Huynh Nguyen Vu, a 9th grader, Phuoc Ngai Secondary School (Ba Tri) is one of 449 students who were awarded this number of devices to support online learning.

Vu is the youngest child in a family of 7 siblings. The house belongs to a poor household in Phu Thanh hamlet for more than ten years. The family’s level 4 house was built more than 20 years ago, now it is old and dilapidated, the furniture in the house has nothing but dozens of bags of newly harvested rice to eat. Vu’s mother, Ms. Phan Thi Thu Minh, 52, said that the poor family has many children, so they don’t know how to work later to have a computer for Vu and him to study online.

Out of 7 children, Vu and his older brother 2 years old are in 9th grade together. Vu’s two other brothers are students and a sister graduated from college currently working in Ho Chi Minh City. Every day, Vu’s father walks around the neighborhood who hires someone to do it, while his mother stays at home to take care of the two children and take care of the cows.

In order to have more income, the grandparents rented two fields (2,000 m2) with the price of 2 million VND per year, growing rice for 2 crops. This year, the rice crop has just been harvested, about 4 million VND, minus 2 million VND for land rent and fertilizer costs, the grandparents have a few hundred thousand dong left over and a pile of straw to feed the cows.

More than a kilometer from Vu’s house, Nguyen Thi Phuong Quyen is currently living with her grandmother. Five years ago, Quyen was in 3rd grade when her mother fell ill, suddenly passed away, and her father walked away. Due to their old age, Quyen’s grandparents only worked a part-time job in the field, raised a few cows to try to raise their grandson until grade 12, and then continued, “but did not dare to dream of college and university like other people’s children. me”.

In the same class as Quyen, Trinh Nguyen Thuy Trang’s family is also a poor household in the hamlet. A year ago, parents separated, father and son Trang left the old house, which used to be a car repair shop, and moved in with his grandparents. Despite having a heart condition, Trang’s father, Trinh Le Hoang Vu, was a self-defense militiaman, still participating in the checkpoints during the 4 months of the epidemic. On the days when the children are about to return to school, Mr. Vu goes to the car repair shop to clean, wait for the epidemic to be okay, and will continue to work to raise his children.

With the desire to reduce learning anxiety for Vu, Quyen and Trang and many students in Ben Tre, on the afternoon of October 14, the Hope Fund accompanying FPT donated 449 tablets.

Representative of Phuoc Ngai Secondary School, Principal Phan Van Tam shared: “This precious gift not only helps students reduce difficulties and study at ease, but also creates an exciting learning atmosphere in all students. school, arouse children’s love for people and friends, further multiply the typical examples of overcoming difficulties, rising in study and in life. I would like to thank the Hope Fund for the warm affection.” .

Mr. Le Van Loc, Vice Chairman of Phuoc Ngai Commune People’s Committee informed that because the locality was newly merged from two old communes before, the conditions were still difficult. In the salty drought season in 2019, nearly 2,000 hectares of third crop rice in the commune were lost. When people have not yet recovered production, the Covid-19 epidemic continues to surround and pile up difficulties.

The whole district of Ba Tri has over 32,000 students, of which nearly 40% of students do not have the conditions to study online.

Together with the Hope Fund – VnExpress newspaper donated computers to disadvantaged children in Ben Tre. Each computer can help heal an educational rift during the Covid-19 pandemic, while creating an opportunity for future generations to access the open knowledge repository. You can learn and support here.