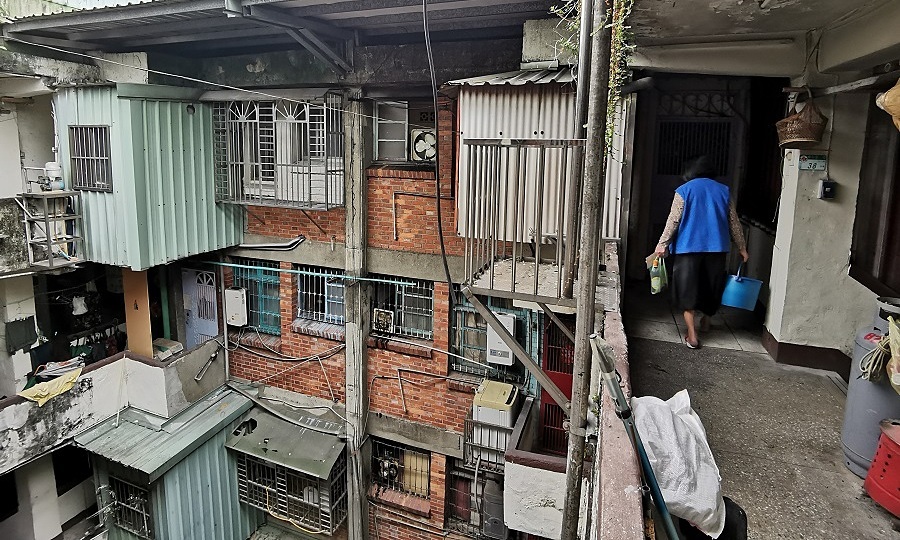 Ms. Luo Yuelan, 70, struggled to carry a box of ingredients to make rice cakes to the 5th floor, in a dormitory without an elevator.

Her dormitory in Zhongzheng District, Taipei was built 54 years ago for 70 low-income families or retired military personnel.

Ms. Lou shared that she has lived here alone since her husband and only son died. With a pension of NT$12,000 and allowance for low-income earners NT$7,000, she has to pay NT$7,000 (5.7 million dong) a month to rent this 26 square meter apartment. The rest is just enough to help her “not starve but also not be able to eat well and dress warmly”.

Many people have difficulty walking and living alone. For them, using the stairs is a challenge. According to social workers, many people died alone at home due to illness and were not discovered until the corpses began to decompose and smell.

The group of homeless elderly people is even gloomier. At midnight, the temperature outside is only 15 degrees Celsius, Lao Lin, 70 years old, is sitting on some cardboard near the entrance to Taipei Main Station. While the surrounding homeless were fast asleep, Lin still couldn’t sleep because of the cold and hunger. During the reporter’s interview, he was very polite and friendly, even though he couldn’t stop shaking.

Lin used to work as a salesman, but half a year ago the company closed due to the economic downturn, so he could no longer pay NT$8,000 in rent. Since then, he has had to sleep here and wait for food from charity groups every day. Lin’s parents passed away a long time ago, he also did not keep in contact with his brothers, so now he only hopes to find a job soon to take care of food and shelter.

Based on the data of social workers, Taiwan has 3,000 homeless people, of which about 600 are in Taipei, Taipei Main Station alone is sheltering 250 people, this number is three times higher. before translation.

Because there is not always enough to eat, some elderly homeless people become criminals. 2021 figures from the Taipei City Department of Budget, Accounting and Statistics show that crime over the age of 65 is 2.72 times higher than a decade ago.

The reasons elderly people commit crimes are sometimes “strange” and according to prosecutors, do not rule out the possibility that they do it on purpose to get into prison, provide them with a place to eat, sleep and get long-term care.

Faced with this situation, volunteer groups are expanding elderly care centers across Taiwan. Fang Her-sheng, 62, chairman of the Taiwan Food Banks Alliance, said he is now responsible for four food banks in the city. The organization provides meals for the elderly and sick and also encourages lonely people to come to their centers to have meals together.

At the four centers, more than 300 disadvantaged people were cared for and no one had Covid-19. Recently, Fang has held sharing sessions and hopes to replicate the model across Taiwan. He also boasted that he had recently given 22,000 care packages including dry food and daily necessities to people in difficult circumstances, thanks to funding.

At the South Airport Living Center, manager Pan Meixiang, 55, said he prepares 500 meals a day for the homeless, in addition to providing free accommodation and groceries.

Ms. Zheng Xiuzhen, 71, who has benefited from the efforts of Fang and his team, says she has been here every afternoon for the past three years to get bread. She lived alone after the death of her husband and mother, and now works part-time to make ends meet. Fortunately, the center supports her, so she also becomes a volunteer here to give value to others.

Professor Cheng from the Department of Social Work, National Taiwan University, highly appreciated social welfare organizations for timely supporting the elderly in the face of population aging and the impact of the pandemic. At the same time, he stressed that the government also needs to strengthen the welfare structure and social safety net.

Experts advise that Taiwan can learn from Singapore’s central patronage system and reform insurance regimes for the elderly with difficult circumstances. On the other hand, it is also necessary to focus on financial education so that young people can start early to prepare for financial security before reaching retirement age.