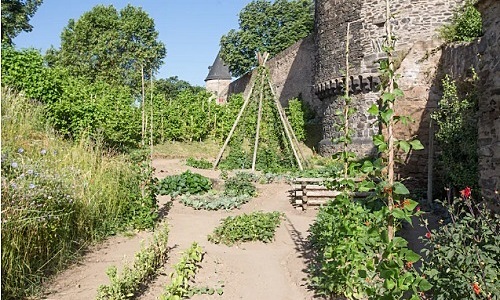 Edible Cities is a network of 150 cities around the world that have adopted the initiative of planting fruit and vegetable crops on public land, for free harvest.

In 2010, the town of Andernach (Germany) planted 101 varieties of tomatoes in public for people to pick whatever they wanted. Seeing the benefits brought, the next year the city planted beans. The next year they planted onions, followed by fruit trees, lettuce, zucchini, berries and herbs. All vegetables are free to the 30,000 inhabitants of the town located in the Rhine valley.

In the US, there are public lands from Seattle to North Carolina where people are welcome to pick their fruits and vegetables for free.

Those who carry out the project to grow vegetables for free say that there has never been a situation where people took more than they needed, whether it was a pear, a bag of potatoes or an artichoke. Every year, the amount of vegetables grown is enough to meet the needs of people everywhere.

When Andernach’s free public garden and orchard opened in 2010, she said, other cities in Germany and across the European Union followed suit. Now, the network of “edible cities” has been funded by the European Commission, the executive body of the European Union.

Today, in Acdernach, a medieval moat is covered with peach, almond, and pear trees. The vacant land near the school has been converted into community vegetable patches.

According to Marisa Pettit, “edible cities” network coordinator, some cities are funded “living labs,” which are green spaces for residents to host community events and develop their own plans. , helping the urban garden grow and give a bountiful harvest.

According to Säumel, as the Earth’s temperature rises and the cities are crowded, the natural space plus is extremely valuable. Edible Cities is also encouraging residents to participate in the care of fruit trees in urban parks, instead of just enjoying.

Many cities in the US also have similar projects. Detroit has the urban farming movement, Philadelphia has food forests, and Atlanta and Los Angeles have community projects where people can pick vegetables for free. All are operated by volunteers weeding, pruning and planting. Smaller cities like Bloomington, Ind., Hyattsville,… also have vegetable gardens where everyone can eat for free.

Lynx Bergdahl, a community organizer at Bountiful Cities, a nonprofit organization, said that at a free tree park in Asheville, North Carolina, residents can harvest whatever they like from the tree. 40 kinds of fruit trees.

“Everybody can get what they want, whether it’s an apple or a basket. This is a way of removing barriers, creating public access to food,” Bergdahl said.

In 2012, the Beacon Hill neighborhood, in Seattle, a large and empty slope next to a public park was transformed into a lively garden where people could pick vegetables and eat them.

Elise Evans, one of the project’s volunteers, said the Beacon Food Forest is a diverse public garden that is open to anyone who wants to enter.