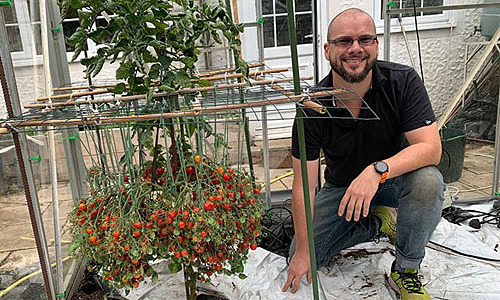 BrotherJust a few weeks after growing a tomato tree with 839 fruits, Douglas Smith, 45, of Hertfordshire went on to set a new Guinness record with another tree with 1,269 fruits.

The old Guinness record for a tomato tree with the most fruit has stood for more than a decade and has not been broken by anyone (488 fruits). Last summer, Douglas Smith decided to challenge himself and succeeded with a tree with 839 fruits. But the man believed he could still do better and decided to plant another tree. The result is a new record set earlier this April with 1,269 results.

This is not Douglas Smith’s first world record breaking for tomatoes. Last year, he made his name in the Guiness book with the heaviest tomato.

Douglas Smith admits he has a hobby of experimenting with growing giant vegetables and large trees. Each test he took carefully.

“I started about 100 plants in pots, then there were only 50 left in the ground and in the end there were only two. I got rid of a lot,” the man revealed about the process of growing many tomato plants. most fruitful.

With nearly 1,300 tomatoes, it took Douglas Smith several hours to harvest them all. The dime-sized tomatoes have a total mass of several kilograms. They are arranged in 10 boxes, each box has more than 100 fruits. Smith said, the cherry tomatoes are very sweet, delicious, clean.

Douglas Smith and his wife Piper, 45, have a 5-year-old son. Before that, he made an impression when he planted a sunflower with a height of 6 meters, far beyond the roof of his house.

However, this achievement was not enough to put him on the list of record holders. The tallest sunflower tree in the world, 9.17 meters tall, was planted by Hans-Peter Schiffer, a German in 2014.