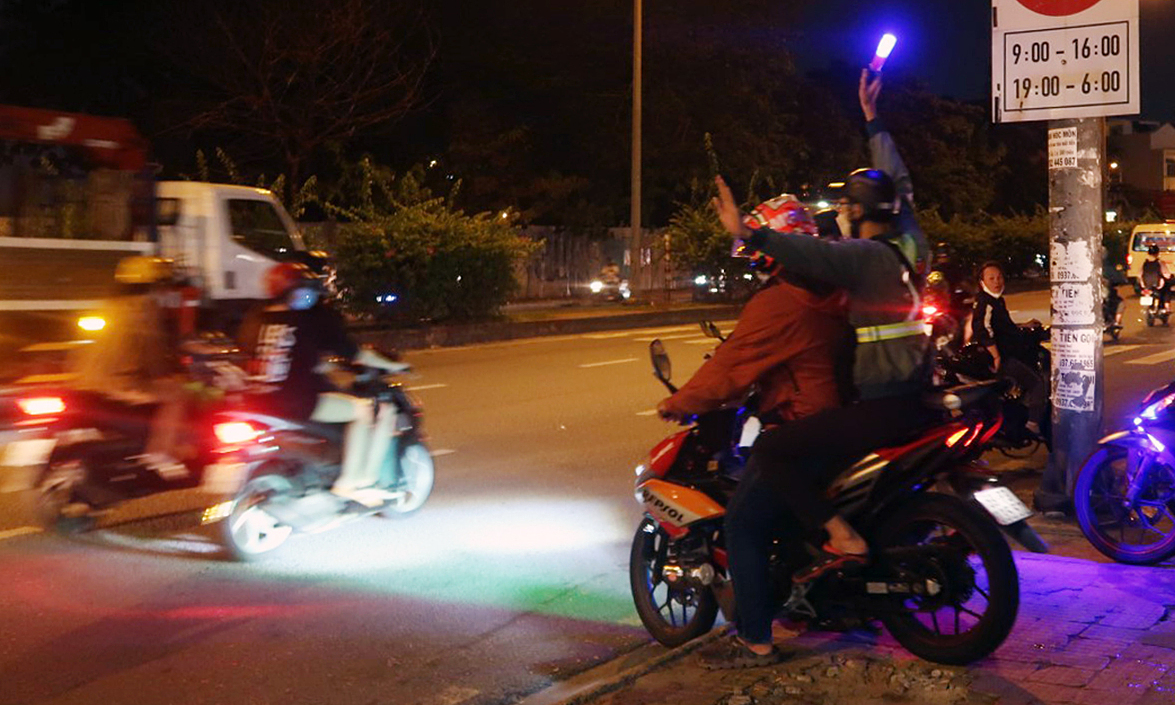 Ho Chi Minh CityThe phone rang, Nguyen Viet Nghia answered the phone and turned to say loudly: “Go to Children’s Hospital 1”. Four motorbikes started up and rushed out into the street at 8:30 p.m. on May 9.

About three minutes later, an ambulance with Tay Ninh license plate whistled past the fuel station of Truong Chinh – Cong Hoa (Tan Phu district). A motorbike leaps forward to take the lead, two escorts on both sides and one follows to block the rear. The people behind the four motorbikes were holding walkie-talkies and shooting sticks. The ambulance service has officially begun.

Conjecturing that this time Cong Hoa road was in danger of being crowded with traffic, Nghia steered into a small alley on Tan Hai Street, signaling for an ambulance to follow.

“Motorcycles, please pull over to the side of the road for me, thank you!”, “Car, turn right to give way to the ambulance for me, thank you!”… just on the throttle, Nghia kept shouting. Seeing that the traffic ahead was not convenient, Nghia took a breath and slipped into the traffic jam on Truong Chinh Street, and the other three motorbikes also immediately followed the direction of the leader.

Out to Ly Thuong Kiet Street by a shortcut, the team signaled for motorbikes in traffic to give way. The sirens of the ambulances and the sound of the horn lights on four motorbikes rattled the road. Many people who heard it rushed to the side. Realizing that the patient’s vehicle was in danger of being trapped, a member of the group signaled that it would replace the front vehicle, taking a shortcut through the intersection to open the way for the ambulance.

The strategy was successful, the ambulance only took about 7 minutes for the distance of nearly 10 km from Tan Phu to Children’s Hospital 1. The pediatric patient was treated at a safe hospital. Nghia turned the car around to lead his teammates back to the gathering place, just in time to wave goodbye to the ambulance driver. In the car, the middle-aged driver bowed back.

That’s just one of the many ambulance trips of the Ho Chi Minh City Emergency Support team, every night. “There were many nights when we were on our way back, met an ambulance, and went on. It is normal to support 4-5 ambulances without stopping for a few seconds to rest,” Nguyen Viet said. Nghia, 19 years old, the leader of the group, said.

Ho Chi Minh City Emergency Support Group was born in 2020 with 12 members. The goal of the operation is to help pave the way for an ambulance to the hospital as quickly as possible and to provide first aid to people who have an accident on the road, all for free. Currently, the number of members of the team has reached 40, divided into 2 groups: Emergency support and accident support.

Vice-captain Nguyen Thanh Phong, 23, said that the group operates from 5 pm to 10 pm every day, except for rainy days. Each member has to go through 6 months of getting used to the accident support team, going through lock up Learn first aid from the Red Cross, then take the safety test before you can join the team.

“In the past, many times on the road, I was always frustrated by the situation of the ambulance, even though the siren was begging for the way, but the people still ignored it and didn’t give way. I wanted to not let any patients die. Given the chance to live when I couldn’t get to the hospital in time, my friends and I decided to form a team,” Phong explained.

The members of the team are all young people, mainly working as car assistants, shippers, security guards… Money to buy equipment, petrol, drinking water is paid by the salary of the team members. again.

The ambulance drivers who have been supported by the team only need to save their phone numbers, when they are transferred to Truong Chinh, they will call for support. In addition, people often wait at the checkpoint, when they see an ambulance passing by, turn on their sirens and a patient in the back cabin will follow and ask the driver which hospital to go to. After that, the team will assist in paving the way for traffic.

Member Tran Hoang Quoc Hoa, 27 years old, said that before joining the team, he had been monitoring everyone’s activities for two years. Once trusted, Hoa just registered to participate half a year ago. “At first, I had to hide it from my family, just tell my girlfriend. But then everyone knew and supported doing useful work for society,” Hoa said.

The 27-year-old boy remembers the most severe traffic jam at Hoang Hoa Tham overpass. He and his teammates had to open the road in the opposite direction because the child in the ambulance was in critical condition due to a brain hemorrhage. Seeing the team coming, the traffic policemen also supported and opened the way for the ambulance to go. “It was really heartwarming at that time,” Hoa shared.

The fate of Do Van Thien Vu’s team is more special. Nearly two years ago, Vu’s grandmother, then over 70 years old, fell down the stairs. Unable to call an ambulance, her family took her to the hospital by taxi. The road from District 12 to Cho Ray Hospital at rush hour is quite difficult because the road is under repair. Being stuck in the middle of the lane, suddenly the team appeared and assisted the taxi. At the hospital, Vu was about to come down to thank him, but the brothers turned the car back. Later, Vu found the group’s phone number and asked to join. “Having been in an ambulance and fearing for the lives of my family members, I understand how patients and their relatives expect to go to the hospital,” Vu said.

But not every time the team can bring the patient to the hospital. “Once, the whole team was rushing away, suddenly the sirens of the ambulance went silent. The driver turned on the loudspeaker: Go home, children, the patient is gone,” said team leader Nguyen Viet Nghia. That time, he haunted forever after slowly letting go of the throttle because he knew that a life had just ended behind him.

Over two years of supporting patients, members said that there were many times when they were stopped by passers-by, demanding to be beaten because they dared to ask them to give way, or collisions when vehicles were still rushing, even though they had been warned. signal out.

Once led by Phong’s group, Mr. Huu Nam, an ambulance driver at Xuyen A hospital, said that in the past he used to transport patients alone, but often got stuck at the intersection because the car in front did not give way. or traffic jams at rush hour. “From the day I was supported by the team, I needed to transfer the disease, just call first and you will lead the way. The patient can get to the hospital as quickly as possible,” said Mr. Nam.

Mr. Nguyen Le Trung Nghia, an ambulance driver who was very close to the team, said that once his car was stuck at the intersection, the patient took his last breath right in the car. “The first time I met the group was the day I drove a case from Tay Ninh to the emergency room at Cho Ray hospital, suffered a traumatic brain injury due to an accident. On the way, my friends ran after me and asked where I was going. I answered, immediately Since then, every time I take a patient to this route, I call for help,” Trung Nghia said.

Two years of operation, but all members share the hope of “soon unemployment”, people consciously make room for ambulances to circulate.

“I also want the team to do well together and methodically so that the leaders can see and create more conditions for us to do our work,” Nghia said.