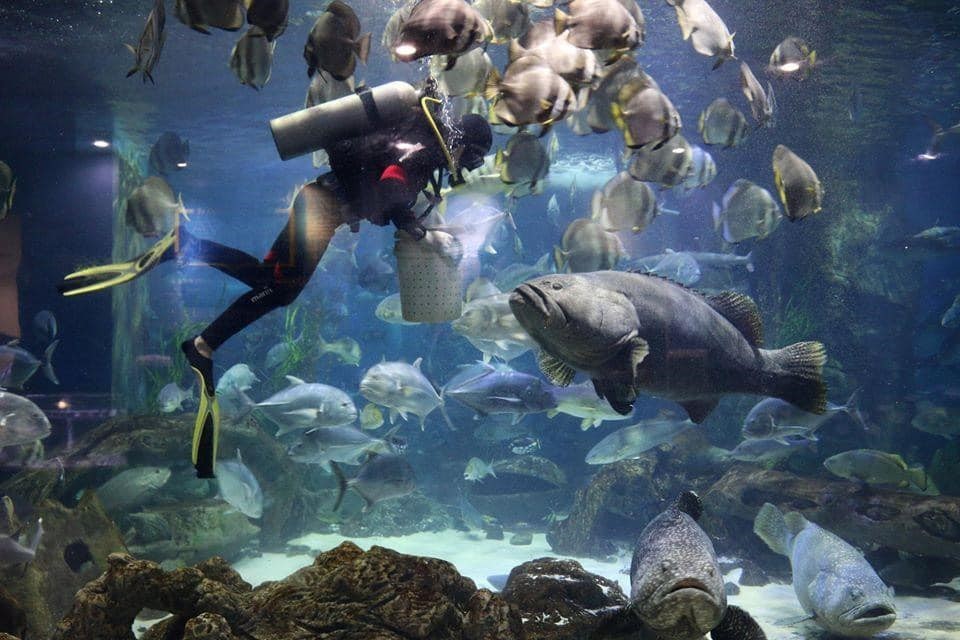 At VinWonders aquariums, there are many people who have lived for thousands of days in freezing temperatures to care for and befriend with penguins and dolphins.

Hearing the sound of the door, the sleeping Gentoo penguins suddenly woke up and rushed to the door to welcome their foster sister Nguyen Thu Suong, an animal care worker at VinWonders Phu Quoc Neptune Palace.

Ms. Suong’s working day starts not with smoke and honking car horns like many people, but with her special children at the cold house of 2-4 degrees Celsius in the aquarium.

Seeing Ms. Suong holding up a bucket of food full of fish, the penguins understood, obediently lined up to take attendance, and then each Gentoo uncle quickly raised his head to take a delicious bite. Satisfied, the whole herd… woke up completely, then waddled to gain momentum on the thick ice, launching into the clear blue water.

Looking at each black back shot like an arrow, Ms. Suong shared that Gentoo made many tourists unable to take their eyes off by the “fastest” water turns in the world. In particular, the young tourists enjoyed the natural personality of the penguins. When eating and drinking, the penguins are naughty when they play. “Sometimes, because of a fight, one child holds the other’s feet, some run out to rub their heads in order to get … more,” said Ms. Suong.

In order for the penguins to keep that nature, according to Suong, the care environment is especially important. This ancient bird is only suitable for extremely harsh living conditions, where ice and water are cold. Therefore, VinWonders Phu Quoc had to create a miniature Antarctica, faithfully simulating one of the coldest places in the world.

To be able to bond closely with the Gentoo herd, the caretakers will have to breathe together in the numbing environment. Dew has been attached to this place for more than 2,000 days. As a native of the South, with poor cold tolerance, Suong had not very easy beginnings. When getting used to and sticking with the penguins, sometimes going away for a few days, as Suong said “so familiar that I can’t stand it”.

VinWonders currently has 3 leading aquariums in the region in Phu Quoc, Nha Trang and Hanoi with hundreds of animal care workers who have worked for many years in the cold environment. But it is also the place where the heart-warming and touching stories of animal love come from.

Veterinarian Nguyen Thi Quynh still remembers a time a grouper had a bloated stomach. For a whole week, Quynh lost appetite and lost sleep, watching every minute of the fish to find the abnormality and the cause of the disease. The little friend stopped eating, and Quynh herself had to feed a little bit of food to help the little fish have the strength to fight. Combined with the drug, it wasn’t until the individual had the strength to splash the water and take the initiative to take the bait, that Quynh and everyone else breathed a sigh of relief.

From Japan, Bond returned to his new home in 2017 with quite a few scars on his body – evidence for seasoned battles in the ocean. Snow has been Bond’s company since day one. Not only full meals, the fish is also talked to and meticulously cared for by Snow to integrate into a new life.

But after a year of attachment, Tuyet had an unexpected job, had to ask someone else to take care of Bond during his absence. Due to her hurry, Tuyet did not have time to say goodbye to her little friend. The nimble dolphin in the days that followed suddenly lost its usual vivaciousness, bored, and shook his head at the counter, determined not to touch the food.

Hearing the news from her colleagues, Ms. Tuyet immediately returned to the aquarium. It took a lot of time to talk and explain the new dolphin .. expressed acceptance. So that Bond is no longer “empty” during her absence, Tuyet must introduce a temporary substitute carer to Bond, helping him get used to it.

As for dolphins, according to Ms. Tuyet, only the living environment is not enough. As an emotional, sensitive species, they always want to be cared for, and how to care for them also needs to be flexible.

In addition to Bond, VinWonders Nha Trang Aquarium is taking care of more than 30,000 species of rare creatures with a closed farming system that meets world standards. Every act of care, even the smallest, must comply with strict, scientific rules. In order to have a show to feed the sharks, few people know that the staff’s actions are followed by a special process, which requires composure, speed of movement, and a safe distance.

During the breeding season, care needs meticulousness and high priority. With cat sharks, each pair of fish will lay 1 egg per day. For the next 3 months, each egg must be monitored individually in a natural environment to ensure that the eggs hatch into offspring. All conditions must ensure the right standards, from water level to temperature. Over the years, this place has continuously successfully hatched cat shark eggs to release into the wild.