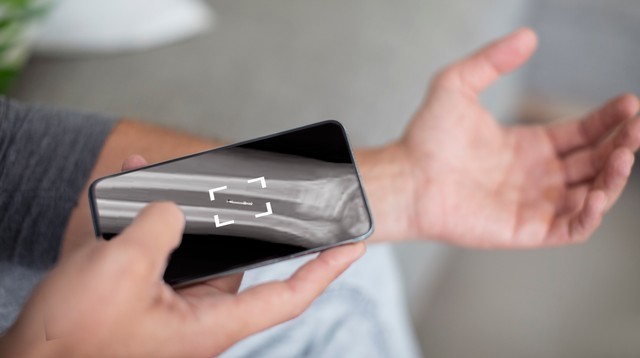 Thousands of people are injecting themselves with microchips to be able to do everything from unlocking, paying, USD, to saving Covid-19 vaccine certificates.

Brandon Dalaly was asked to show a vaccine card when attending a concert last month. Unlike friends, he does not have a hard copy, nor a certificate on the phone. But upon reaching the location, Dalaly slipped her hand under the scanner, surprising the security staff. For half a second, a green light flashed under his skin and the scanner displayed his vaccine certification details.

Dalaly got in without having to rummage around for identification. He describes himself as a “human cyborg” – half-human, half-robot characters in sci-fi movies. His microchip or chip is the size of a grain of rice, inserted under the skin, identified by radio frequency (RFID).

“For me, it’s like having a sixth sense. I use the microchip to store medical records, work records as well as use it as a crypto wallet and unlock,” he said.

Dalaly first discovered the implantation of chips in humans in 2014, when he read that a company told employees to convert rank badges into a subcutaneous chip. Some other companies have employees implanted with chips to access computer systems.

After six years of pondering, Dalaly finally decided to inject in June 2020, when the technology has enough updates for a single chip to perform many functions.

RFID technology has been around for decades. British scientist Kevin Warwick (known as Captain Cyborg) was the first person in the world to implant RFID in 1998. To date, this technology has become popular in the market, especially in Sweden, where thousands of people have applied. The pandemic has increased interoperability with technology more than ever, and more people prefer to turn their bodies into machines.

Dalaly is currently active in the Facebook community RFID Implantees, gathering more than 4,000 people with microchips or are planning to. Members get implants for a variety of reasons, from security, to opening car doors, to credit cards. Some people prefer minor surgery for placement, others for injections. Some people have one microchip, some have more than 20.

Sandra Würthner, a travel blogger from Austria who now has 25 chips, says her life has been easier in many ways. In 2017 she became one of the first in the world to inject microchips to store payment information. The convenience, coupled with a robotic feel, made her unconcerned about the negative reactions to the technology. “I’ve always been a sci-fi fan and am a big fan of Star Trek. It’s great to feel like I have this technology inside of me,” she said.

For many people, microchips are installed to perform specific functions. Jake Bachus, a hacker from Michigan, USA, has conventional implantable devices to unlock doors and store information. But he needed the security function, so he programmed a microchip to become the key to secure his gun. Bachus has ADHD and often loses his keys or forgets his password. Microchips are your lifeline. “It’s faster than an electronic lock, more reliable than biometrics, and also more secure,” says Bachus.

Some privacy experts have expressed concern that the microchips could be used to track, attack or steal sensitive data. Many transplant recipients have had mixed reactions when being considered “other”, “monster”, “Satan”. “Once, my girlfriend took me home to meet my parents. Her father said my microchip meant the end of the world was near and even quoted a line in the book about the mark of the evil god,” Dalaly said. Many others, like Sandra Würthner, admit to having lost much. friends, because they thought the transplant was dangerous.

However, for many implanters, the biggest risk is that updates could render their RFID chip obsolete. This is especially the case for Jackson Kingman, who feels none of his 31 implants are really helpful. “One of my chips has poor reception, no longer useful. Another can be used to take the elevator, but sadly has a programming error. Now I see some chips that are useless. But I never thought of taking them out, because they have adapted to my body over time,” Kingman said.

Despite the potential dangers, the community still welcomes new members and new technology with pride. They chose to prioritize convenience over an uncertain future, as the non-implanted fear. The group also became a space to exchange unique microchip ideas, from a watch where the numbers glow under the skin, to an invisible USD drive that can store all the data under the skin.

“Unlike tattoos, the chips don’t change your appearance, but add practical uses to our bodies,” says Jake Bachus.