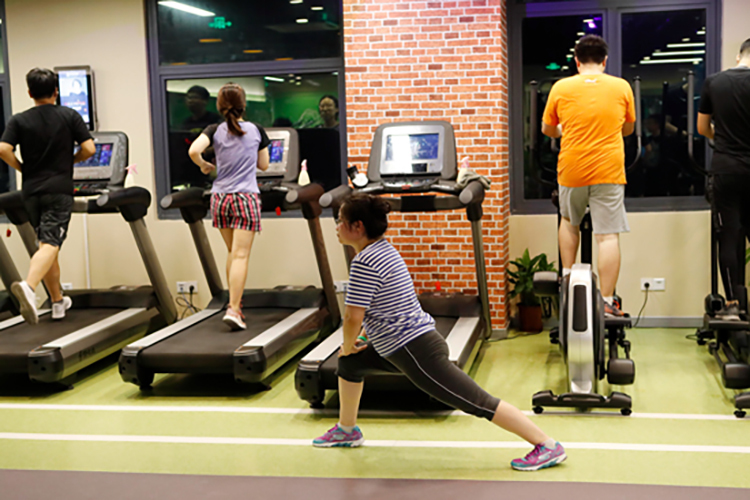 ChinaAt 12 o’clock at night, Hung Man is running on the exercise machine at the gym in a building in Chaoyang District, Beijing.

The place she practiced was in the innermost corner of the room, where she felt safe, unnoticed. Two hours ago, it was difficult to find such a beautiful location.

The gym at night is usually open from 10 pm and until 3 am the next morning, most of the guests are young men. “They are office workers who work overtime, people with insomnia or husbands who get kicked out of the house by their wives,” said the gym manager.

Hung Man likes a quiet environment to focus his thoughts while exercising. Work overload, plus constant insomnia, she decided to exercise after 22:30, when she was free.

Working at an Internet company, the job compensates for the head and overtime, so usually at 10 pm, Hung Man leaves the company. Less than 30 years old, but her stomach, spine, and waist all have problems.

In early 2020, the old company streamlined its personnel. To evaluate work efficiency, the company relies on overtime, including Sundays. As one of the first employees to be fired, Hung Man was shocked. She returned to her hometown, overeating and gained 10 kg in just 2 months.

“I always live in a state of play with no goals. Right now, running is the only thing I can grasp.” Hung said the rewards of running are very clear: Losing weight, improving That’s why she’s been running for the past two years.

Initially, Hung Man could only run 3 km, 5 km and then up to 15-20 km… The numbers on the machine were constantly refreshed, which meant creating new joy for her. Hung began to believe that as long as he kept trying, things would definitely get better.

In August 2020, she found a new job in Beijing and decided to buy a pass at the nearest gym to the company to run at night.

Her practice is part of a 24-hour gym chain, founded 5 years ago and now has grown to 800 rooms, of which Beijing has 141. Chaoyang is the most populous district with 59 rooms, meaning every 8 km, There’s a gym like this.

Compared to the traditional gym with an area of ​​thousands of square meters, the 24-hour gym is only 300 square meters in size, with simple facilities and lower costs. All activities of the gym are through scanning the application code. Even when unattended, customers can get in and out with ease thanks to scanning a pre-issued code.

22h is also the time that Phan Than Tuan, 20 years old, from Son Tay, a restaurant waiter, comes to the gym. The restaurant closes at 21:30, after cleaning, you come straight here. Phan usually runs on the machine for 40 minutes before switching to other devices. He practiced for two hours every day.

A year ago, Phan came to work at a restaurant in Beijing, starting a life of “opening your eyes to go to work, closing your eyes when you close your eyes”. At that time his weight was 110 kg. Looking at himself in the mirror, Phan always comforted: “Handsome, not fat”, until a colleague advised him to lose weight. Phan decided to exercise.

When he first came to Beijing, this young man was unhappy. Restaurant work is very monotonous, each shift is 10 hours, clothes are always covered with grease. At the busiest time of the day, Phan felt like he was on a cloud, his mind was blank, and he was not aware of what he was doing. “I’ve always felt like a machine on an assembly line, repeating the same movement from morning to night,” he says. It wasn’t until she started exercising that she realized she had a life goal. “Every time I lose weight, I have a strong feeling that things get better.”

During the Lunar New Year 2021, due to Covid-19, Phan stayed in Beijing, hanging out around this huge city. He suddenly realized, the world is very big. “So I will continue to exercise, because in big cities, it’s only by changing yourself that you have the opportunity to expose yourself to a lot of things you’ve never known before,” Phan said.

Nighttime exercise is increasingly popular in China’s major cities. Stress, busyness, longer working hours and high demands on appearance are the reasons for more and more young people entering this type of gym.

In medicine, there is no definitive conclusion about the most appropriate time to exercise. Hou Xixia, a lecturer at the Shanghai Sports Academy, said that sleep quality is especially important in maintaining health. Studies have shown that from 11pm to 1am the next morning, people have the ability to fall into a deep sleep. Therefore, he does not recommend exercising at night.

But for those who are in the gym 24 hours a day, sleep should give way to a more important goal. Tieu Linh, a mother of two, shared that she is always busy. “I often have to go on business trips, and I also have to take care of my family and children.” But when she entered the gym, Tieu Linh was still very excited.

“To lose weight, she can do anything,” says her trainer.