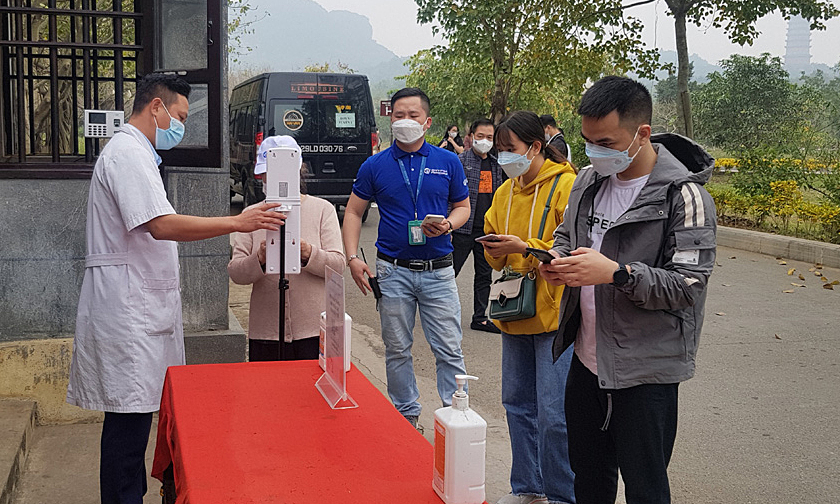 Returning to her hometown from an orange district in Hanoi, despite having a negative test result, Mai Huong was determined to “come from an at-risk area” and must be isolated at home like F1.

On January 12, Huong, 29 years old, in Hanoi and her brother went by car to visit her parents in Thanh Binh ward, Ninh Binh city, Ninh Binh province. After the rapid test was negative and it was determined that “coming from a risk area”, Huong was asked by the ward health center to isolate for 7 days in a private room, not to be in contact with relatives and must sign a commitment to comply with the regulations. Currently isolating people who have been in close contact with F1.

“They said, if the family is not eligible for home isolation (without a private room) they will have to go to concentrated isolation,” Huong said and added that before returning, she asked about the epidemic prevention regulations at the hospital. wards, even called the hotline of the provincial Department of Health and was answered “follow the current epidemic prevention guidelines of the province”.

According to Huong’s research, people who come to/return to Ninh Binh must make a medical declaration, notify the local authorities where they reside, do tests and have results of SARS-CoV-2 screening by RT-PCR method. or rapid test negative for Covid-19, will be returned home.

“But there is no document stipulating that people who have returned from level 3 places (orange areas), have had two doses of the vaccine, have a negative rapid test, will have to be isolated like F1 – people who have direct contact with F0”, Huong said. said and could not be satisfied with the lack of synchronization between the directing documents of the province and the commune and ward levels. Currently, she works online from home and counts the days of being “released”.

“Not all people returning from Hanoi have to undergo medical isolation. When returning, people have to go to the ward medical station to declare, based on the actual conditions of the destination, vaccination will have regulations. specific decision”, the leader of the People’s Committee of Thanh Binh ward replied to reporters VnExpress the morning of January 17.

When asked about the case of Mai Huong and some others, when returning home from an orange district in Hanoi, they had to be isolated like F1 even though there was no evidence that they had been in contact with F0, the ward leader said will review and inform later.

Fearing isolation, Minh Thuy and her husband, 40 years old, living in Me Linh district did not dare to return. Inquiring, she knew that people at level 2 (yellow zone) and level 3 (orange zone) returning to Gia Vien district had to be isolated at home for 7 days, even though they had a negative rapid test or PCR result in 72 hours.

“But I want to know for sure that I still have to go to the commune, so the family planning to have a holiday close to Tet is quarantined, but now I don’t dare to risk it,” Thuy said.

Not only Thuy, many other people also expressed confusion when in the same province, each place’s epidemic prevention regulations were different. “The lack of synchronicity and consistency makes expatriates wary,” lamented the 40-year-old woman.

“We do not have regulations on isolating people returning from Hanoi. When returning to the locality, people only need to declare to the ward medical center and have a negative rapid test result will be allowed to go home for health monitoring. If you have a positive result, you must be isolated,” said Dinh Van Thu, Chairman of Ninh Binh City People’s Committee.

According to Mr. Thu, for long-term residents, they will be required to have a quick test every two days until the 7th day, to monitor their health and ensure safety.

However, the regulations for people returning from epidemic areas of Ninh Binh are constantly changing, making people away from home tired. On December 16, this province issued a document to temporarily isolate people from Hanoi, but a day later it was withdrawn. Instead, the regulation requires people from Hanoi and some high-risk provinces when coming to the locality to make a medical declaration, take samples for testing in accordance with the epidemic areas. Those who test negative for Covid-19 within 48 hours or have a household registration in Ninh Binh who go and return within the same day do not need to be tested.

On January 15, the province temporarily suspended the operation of epidemic control points, with people and vehicles entering Ninh Binh, implementing epidemic prevention and control in accordance with Resolution 128 of the Government.

“Removing the lock but being confused in the isolation regulations is no different. Every time I return, I am confused about the regulations”, said Tung, Huong’s brother, sighing.

Tung affirmed that he and his family always strictly follow the isolation regulations under the guidance of the Ministry of Health or the province. But there should be uniformity, coherence, avoiding annoying people.

“If I knew in advance that I would have to isolate at home for 7 days, I would arrange work to return, instead of being forced to stay at home like now. Now that I have signed a commitment to stay at home, if I escape, I will be breaking the law. “Huong sighed.

On January 17, in the guidance to implement Resolution 128 on “safe adaptation”, the Ministry of Health asked localities not to designate testing for people’s travel; Only test people from level 4 epidemic areas (red zone, very high risk), or blockade areas, suspected or indicated cases for epidemiological investigation from areas with level 3 epidemics (orange areas). , high risk).

“In case the locality implements extreme disease prevention and control measures, failing to comply with the law, violators will be disciplined, administratively fined or examined for penal liability,” the law said. Master Cuong commented.