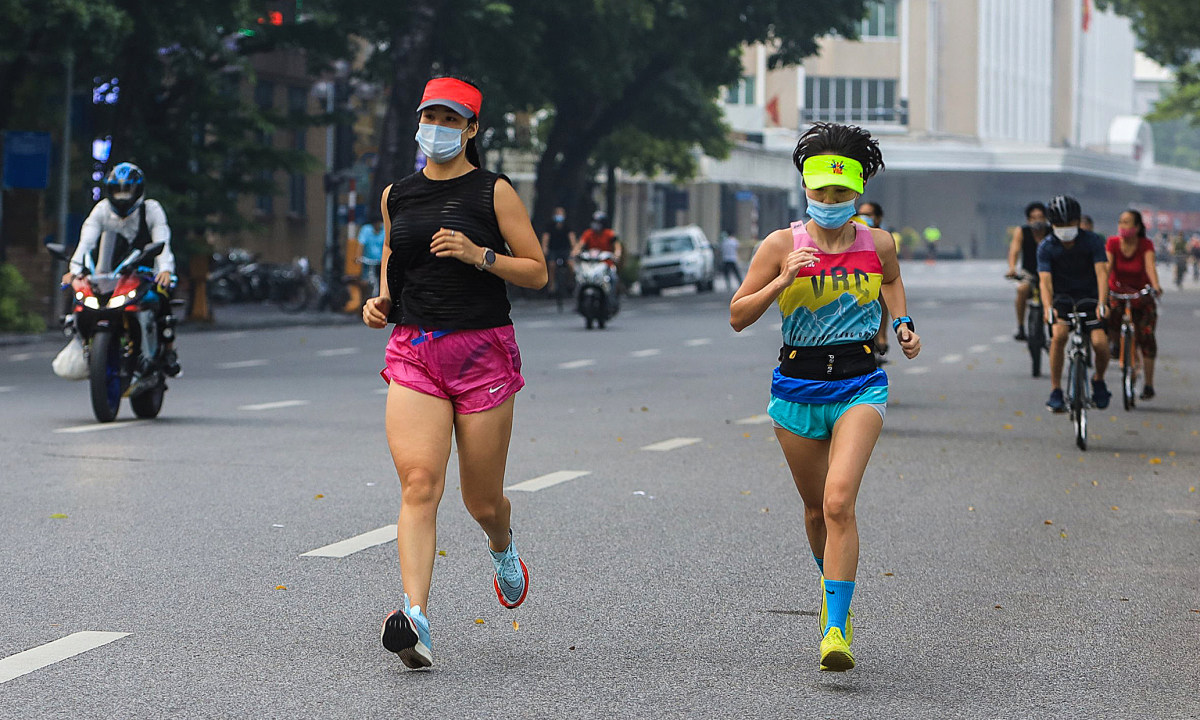 Hanoi“Exit!”, Nguyen Thanh exclaimed when he heard that the park was open from tomorrow, not jogging in the street, which has caused him suffering for many days.

On the afternoon of October 13, Thanh, 27, residing in Dich Vong Hau ward, Cau Giay district, sent a message to invite you to go to Cau Giay park tomorrow afternoon to run, after many days can only exercise outside.

“Over half a month of waiting, this is the brightest news for me,” Thanh said. According to Hanoi’s new dispatch, from 6 a.m. on October 14, the city reopened the park, restoring a series of business and service activities. This means that from tomorrow, Thanh will have a safer place to exercise, instead of having to compete for the roadway with traffic.

Thanh has a habit of running for more than 3 years. Due to the outbreak of Covid-19 in the capital, from July 8, the city banned outdoor fitness activities, so this habit was interrupted. “I always want to run. I can’t exercise within the four walls,” Thanh said.

After more than two months of separation, from September 28, Hanoians are allowed to exercise and do outdoor sports, although parks and flower gardens have not yet been opened. Since that day, Thanh went to practice again, but not on the wide, flat and winding roads in the park, he had to run under the road. “The sidewalk is very narrow, many places are unfinished construction, many people go to practice, so I just have to go there,” he said. To stay safe, the 27-year-old turned to walking briskly because the road was dark, or was caught in the eye by a car with headlights on. Every day when he goes for a run, Thanh prays that the park will open soon.

News of the opening of the park also made Mr. Nguyen Duc Nghia, 45 years old, living in Yen Hoa ward breathe a sigh of relief. He said he often had difficulty running because running on the sidewalk, high places, low places made him unable to adapt. His practice place is also the roadway. “I know it’s dangerous, but it’s difficult to run on the sidewalk,” Nghia said, adding that the city should open earlier because “exercise on the sidewalk is no different than in the park”.

The days when the park is not open, it is not only difficult for practitioners but also for vehicle drivers. Nguyen Phuong Thao, 28 years old, living in Dich Vong Hau ward, nearly crashed into a jogger in the roadway, outside Nghia Do park three days ago, due to the dark road, out of sight. “Luckily, I braked in time, there was no car behind, so no damage,” the young girl recalled.

However, there are those who are not thrilled with the news. Mr. Pham Dinh Trong, 76 years old living in Dich Vong ward, said that when Cau Giay park opens, there will be a lot of people coming to exercise and have fun, including families who let young children come to relax, increase risk of disease transmission. “In my opinion, we should wait a bit longer, wait for the epidemic situation to stabilize,” Trong said.

According to Khong Minh Tuan, deputy director of the Hanoi Center for Disease Control (CDC), the fact that Hanoi will not reopen the park from September 28 is to avoid gatherings of more than 10 people. Facing the new situation, the authorities have made appropriate adjustments.

“Whether it’s open or not, people when exercising outdoors need to ensure epidemic prevention measures. Wear masks, adhere to 5K and limit large gatherings,” said the Deputy Director of the Centers for Disease Control and Prevention. fox.

As for Thanh, the worry of constantly encountering “obstacles” will no longer be, tomorrow afternoon he can confidently strut around the park. “The burden of avoiding people, avoiding potholes, my means of transport seems to be lifted,” he laughs.