The journey back to the international playground of the runner-up in the men’s 56kg weightlifting ASIAD 2014 weightlifting event, Thach Kim Tuan, was really not easy. However, experts still have high expectations for this election, even though Thach Kim Tuan recently failed to succeed at the 2022 National Club Weightlifting Championships, taking place in Hanoi.

Which goal does Vietnamese sports choose for ASIAD and Olympic? U21 Vietnam competes in ASIAD 2022: When the U23 force is not reputable enough

As people in the profession and Thach Kim Tuan himself acknowledged, since the outbreak of COVID-19 until now, there have been too many difficulties for this election. The most obvious is that the major investment candidates of the Sports industry such as Thach Kim Tuan and Hoang Thi Duyen rarely attend international tournaments to rub and strengthen their fighting skills.

Champion Thach Kim Tuan once failed at the Tokyo Olympics because he was unsuccessful in all 3 times lifting weights in the push event.

In addition, the COVID-19 epidemic also affected the preparation process for the Tokyo Olympics that took place more than a year ago in this city of Ho Chi Minh City. At that time, Thach Kim Tuan and his teammates competed in the Tokyo Olympic qualifying round in Uzbekistan.

By the time he returned home, like many teammates, Thach Kim Tuan had to undergo concentrated medical isolation for more than 40 days. It is the time in the concentrated isolation place that is too long, plus the lack of training equipment and a moderate diet that has affected the preparation for competition at the Tokyo Olympics.

By the time he left the isolation area, Thach Kim Tuan had just over a month to prepare to compete at the Tokyo Olympics. That time was not enough to accumulate strength and strength, plus shoulder and back injuries led to Thach Kim Tuan’s unsuccessful competition in the Tokyo Olympics. Here, he only completed the jerk test while failing all 3 times in the push test.

That left a big regret for the manager. Because according to calculations, with Tuan’s background, he can completely reach a total of 298kg to win at least a bronze medal. In fact, at the Tokyo Olympics, the bronze medalist only achieved a total of 294kg. Until the statistics, people remember that Thach Kim Tuan failed to send all 3 times in the push content at the 2016 Rio Olympics, and in Tokyo 2020, he also failed 3 times to push.

Also because of an injury, Thach Kim Tuan could not participate in two tournaments in the national competition system in 2021, the National Weightlifting Championship and the National Club Weightlifting Championship. Meanwhile, the results of the two tournaments are the basis for selecting athletes to attend the 31st SEA Games. This also made him miss the opportunity to attend the 31st SEA Games, even though he was looking forward to competing at the SEA Games in the Philippines. Vietnam.

At the beginning of 2022, Thach Kim Tuan talked about putting aside the failures in 2021 to look forward to the 19th ASIAD in 2022 in September. But then ASIAD 19 also postponed the organization date to September 2023. While waiting to attend major international events such as the 2023 SEA Games or the 19th ASIAD, Thach Kim Tuan is still patiently practicing even though his performance has never been at its best. However, he still wants to attend the playground, even if it is only domestic, to check his performance.

Because of this, this candidate has participated in the 2022 National Club Weightlifting Championships in the category of the achievement test, not the medal competition. Similar to the case of Thach Kim Tuan, the candidate who won the ASIAD runner-up in 2018 Trinh Van Vinh. While Trinh Van Vinh played stably with a total of 300kg, Thach Kim Tuan was not like that.

He only successfully lifted weights in the recoil competition with a best achievement of 125kg. In the push exam, Thach Kim Tuan failed in all 3 competitions with weights of 150kg, 155kg and 157kg, respectively. These are all weight levels that are not too difficult to conquer with this election about 8 years ago. But so far, those weights are too “heavy” for his performance.

Witnessing Thach Kim Tuan compete in the men’s 61kg category at the 2022 National Club Weightlifting Championships, General Secretary of the Vietnam Weightlifting and Bodybuilding Federation Do Dinh Khang commented: “It is impossible to confirm at this time. determined that Thach Kim Tuan no longer had the opportunity to dispute his position in the national team to attend international tournaments. This is not the time when Thach Kim Tuan has reached a point of falling, so there is nothing to worry about.”

According to calculations, it is possible that the Ninth National Sports Festival in 2022 is the place for Thach Kim Tuan to choose the falling point after a whole year of not playing. That’s a problem for both the Ho Chi Minh City weightlifting team and Thach Kim Tuan. Because if the competition is not successful, it will be difficult to find the opportunity to attend the 32nd SEA Games in Cambodia in May or ASIAD 19 in September.

Mr. Do Dinh Khang also talked more about the case of the election of Trinh Van Vinh. According to Mr. Khang, this Bac Ninh citizen is in need of asserting himself as well as gaining self-confidence during the execution of a disciplinary sentence from the World Weightlifting Federation. Therefore, even though he only competed in the test, Trinh Van Vinh was still motivated enough as he was in the medal competition, leading to such good results.

Obviously, Thach Kim Tuan’s determination to pursue the 61kg class is bringing about many positive effects on the force of the strength content of Vietnamese weightlifting. Industry insiders, managers are still patiently waiting for this election to come back to be really impressive, to create a more competitive environment for other candidates in the same weight class. What is important is how determined and how strongly this city will make a comeback. 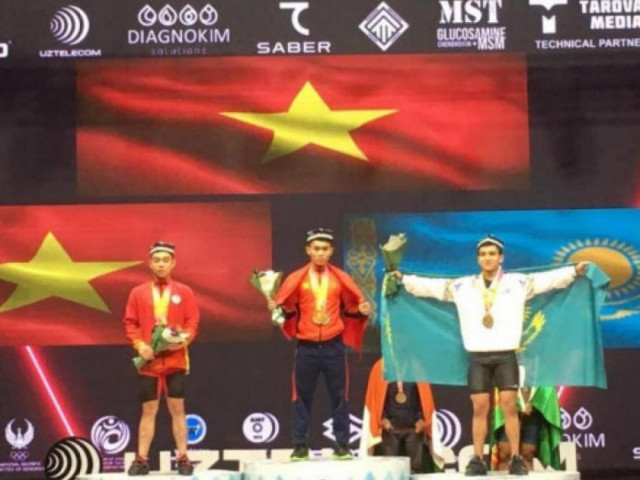