(F1 racing news) The first official run day of the new 2021 season took place at the Bahrain international racetrack with many notable developments. The performance of the racers in the FP1 and FP2 sessions partly helps us to have a picture of the order of the teams, along with a little surprise.

The key change this season is that the time each 6th day runs has been reduced from 90 minutes to 60 minutes. That makes the plans of the teams need to be adjusted and avoid unnecessary mistakes. The first FP1 of the year has been very exciting and has seen graded simulations on Soft tires in the last minutes.

Mercedes is still appreciated, although it does not have the No. 1 achievement

Max Verstappen and Red Bull created the same scenario as the pre-season test two weeks ago, being the fastest driver of the FP1 despite a small mistake in his lap. # 33 handle the 1 minute 31,394s, pushing Valtteri Bottas down to 2nd place, 0.298s slower. Behind the wheel of Mercedes is Lando Norris (McLaren) with a new engine from the German supplier and champion Lewis Hamilton ranked 4th, one of the few using only Soft tires throughout the run.

Charles Leclerc and Ferrari are the last names in the top 5, 0.6s slower than Verstappen. He stands right above the ‘rookie’ at Red Bull this season, Sergio Perez and new teammate Carlos Sainz ranked eighth. Between them is Pierre Gasly (AlphaTauri), the driver still shows a high performance and promises to bring. many surprises this year. Daniel Ricciardo lost nearly 0.5 seconds to Norris in ninth place on his first official day with McLaren. Alfa Romeo unexpectedly won the next two places with Antonio Giovinazzi above the ‘snowman’ Kimi Raikkonen. 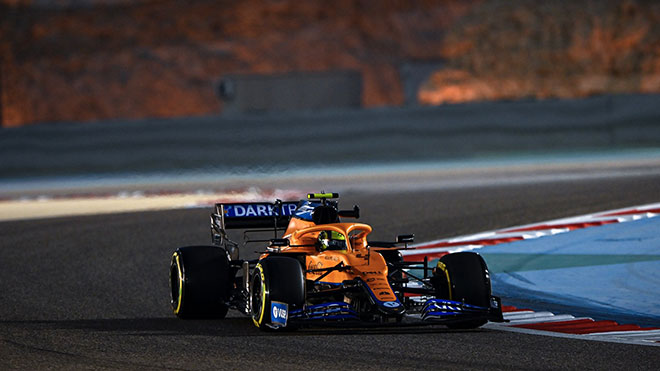 Norris surprised with top 3 results in both sessions

Aston Martin followed Alfa Romeo with Sebastian Vettel and continues to adapt and adapt to the new car. Rookie Yuki Tsunoda ranked 14th but could not get the best lap due to the heavy traffic density on the road (traffic). Alpine has not shown much when it only has modest results and is in the group of 6 slowest cars. However, FP1 takes place during the day, in stark contrast to the official race conditions, so many teams have not shown all in this run.

FP2 continued to be an active run from the first minute and once again Verstappen and Red Bull were the fastest, completing day a perfect Friday. The Dutch handlebars show comfort and confidence on the RB16B, and he maintains a good track record in a run that means more than the FP1. Under the night lights at Sakhir, car # 33 reached a lap time of 1 minute 30,847 seconds to rank 2nd in 2021. Equally impressive compared to Verstappen was the effort of Norris. After winning 3rd place at FP1, he continued to have 2nd fastest performance in FP2 with only 0.095s slower than his opponent thanks to the MCL35M. Hamilton ranked third, but according to the data collected, he is the fastest person if there is a perfect lap. Followed by Sainz with their short-run performance (classification) and long-run (serving the main race) are very prosperous.

Bottas complained about the hard-to-control W12 and Ricciardo is still getting used to McLaren, ranked 5th and 6th, while rookie Tsunoda took an impressive 7th place, ahead of teammates Gasly at 9th. Perez and Leclerc only got 10th and 12th place, which certainly does not reflect the ability of both considering what Verstappen and Sainz can do. The two former champions Vettel and Alonso are still not fully comfortable in the current car and are only 14th and 15th place. Aston Martin and Alpine are in desperate need of the experience of two riders speaking out in the context the distance between the teams is getting closer.

The only incident that happened on day 6 belonged to Raikkonen when # 7’s steering wheel slipped in the second corner, causing the Alfa Romeo C41 to be thrown out into the retaining wall, causing the front spoiler to break. ‘Snowman’ ended at 16th place. Thus, the advantage after the first day belongs to “bulls” and Verstappen, but Saturday will be a completely different story. We can expect a ‘two-horse’ confrontation between Hamilton and Verstappen next Sunday. 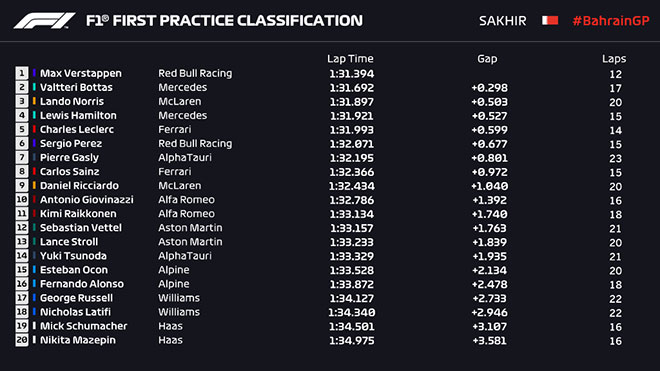 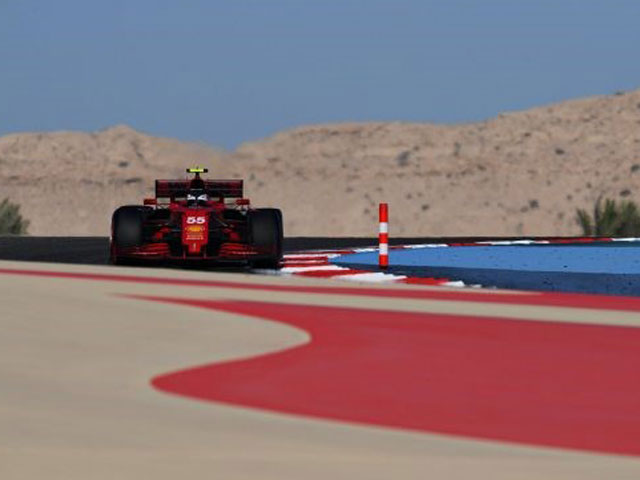