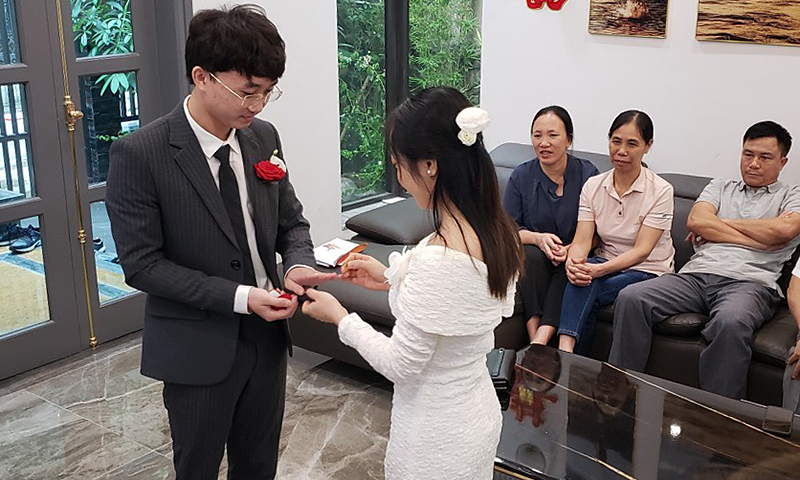 HanoiOne month before the wedding day, the epidemic was still complicated, Mr. Vu Khac Hung came up with the idea of ​​​​organizing an Internet wedding with three bridge points in Hanoi, Vinh Phuc and Ninh Binh.

On the morning of September 22, in a house in Tay Ho district, the bride Nguyen Thi Bich Phuong, 23, got up early, wore an old white dress, her face was simple. She went to the next room to help the groom Khac Hung adjust his tie, then the two walked hand in hand down to the living room. Today, this place is the ceremony of the young couple.

At 9 am, the computer screen is connected to two bridge points, the bride’s house in Vinh Phuc and the groom’s family in Ninh Binh. At the Hanoi bridge, there are the bride and groom, the groom’s parents and siblings, and the bride’s sister. When the bridgeheads are connected to each other, the atmosphere in the ceremony hall becomes full of laughter, greetings, and inquiries from all over the world.

The couple’s wedding ceremony was also full of procedures as usual and ended after nearly an hour with the ring exchange. “Even though it’s not perfect, I’m satisfied and happy because of the love people have for both of them,” said the bride Bich Phuong.

Khac Hung and Bich Phuong have been in love for 5 years. Their engagement ceremony was held a year ago, the wedding date was fixed from that time. The epidemic and the times of separation caused their preparation plans to constantly fall apart. Until the wedding day, they did not take the wedding photos as they wanted. The honeymoon trip in Da Lat was also cancelled.

As the wedding day approached, Hung and Phuong and their families were very impatient because the epidemic was still complicated. Finally, the bride and groom proposed to do an online wedding and the families of both sides agreed. “When I called my parents to present this idea, I was very nervous, afraid of being opposed. Unexpectedly, they always agreed,” Bich Phuong said.

The day before the wedding ceremony, Bich Phuong and her sister Nguyen Thi Minh Cham were picked up by the groom’s family from the motel room. Hanoi has just loosened the distance, so services such as wedding dress rental, makeup, hairdressing … are not available. Phuong’s old white dress was chosen as the bride’s dress. The whole decoration of the wedding hall and the wedding room was done by Hung and Phuong in about two hours. Younger sister Minh Cham, 20 years old, was assigned the task of supporting her mother, doing makeup for her sister and “bringing the new bride to her husband’s house” even though the procession of the bride was only from the living room on the first floor to the second floor.

“During a month of preparation, my husband and I had to constantly adjust our plans to fit the situation. Everyone thought that an online wedding was simple, but it turned out that there were many things to worry about,” said the groom Vu Khac. Hung shared.

Near the wedding day, Mrs. Nguyen Thi Thuy and Bich Phuong’s mother, many nights could not sleep. On the morning of the wedding day, she got up at 3am to prepare three dishes. “A few minutes later, I texted again to ask how the situation was prepared,” she said. In the moment when the two children exchanged wedding rings, relatives on both sides raised a glass of blessing from the computer screen, and Mrs. Thuy secretly wiped her tears with the hem of her ao dai.

The online wedding video of Khac Hung and Bich Phuong after a day of posting on social networks has received more than 2 million views and nearly 10,000 shares. Many people who do not know also commented to send their blessings to the young couple.

“It’s touching, despite the epidemic, but when love is ripe, they should come together. It doesn’t matter how it is organized, it’s important in the love you two have for each other. Personally, I strongly support this approach. At the time when the epidemic did not know when to end”, a user named Do Trang commented. 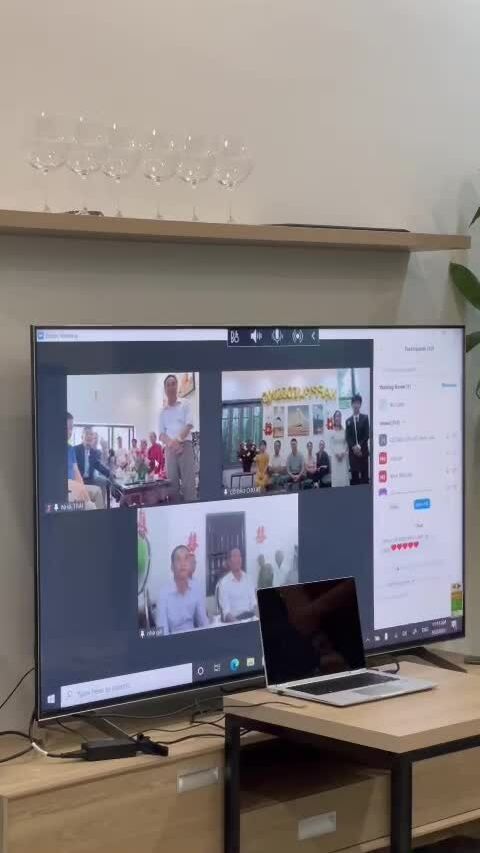 Online wedding during the quarantine period