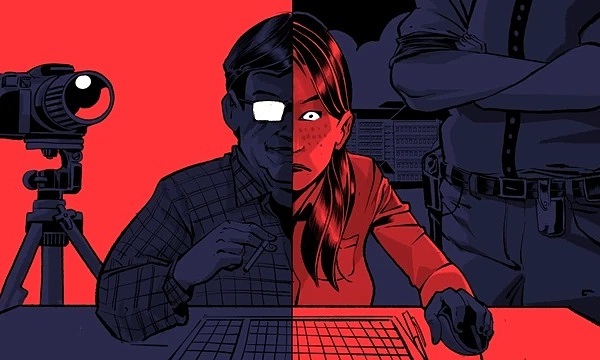 By day, Neila (false name) is a cleaning worker in Lyon, but by night she becomes a fighter to track down pedophiles on social networks.

It all started in 2019, when Neila watched Zandvoort, the File of Shame – a documentary about the case of a German man living in the Netherlands following an online sale of child pornography. Unable to believe what she just saw, the young woman decided to do something.

Neila spent a lot of time researching child abuse and came across a man who specializes in tracking Internet pedophiles, living on the island of Réunion (France). This person used the nickname Steven Moore to hide his identity.

Moore’s way of working is very simple. He created a fake Facebook account, used the personal information of his children under the name Alicia, waited for the criminals to access, sent sensitive messages and alerted the police.

Neila quickly joined the party. The group currently has about 50 members in France, Belgium, Canada, Réunion and Mauritius (country in East Africa) working in different professions.

To trap their prey, Moore’s team created dozens of personal accounts posing as teenagers. Like Neila, she just posts photos of herself edited to look 20 years younger, then shares her outings, hobbies, sports in public and waits for the bad guys to contact her.

“I spend 40-50 hours a week on this job,” she says, adding that there are two types of people who usually initiate contact. One is the overt abusers who actively send sensitive messages and the other is fake protection – the most dangerous group when trying to psychologically manipulate their prey by pretending to be in love with the child.

As with the latest profile picture posted under the guise of Lucie, 13, Neila received hundreds of sensitive messages, photos and videos from men aged 17-85.

Neila’s job is to take a screenshot of every sensitive message sent, saving all the evidence in a file with the pedophile’s identity, age, occupation and address. Finally, she will provide all this evidence to the police to forward to the prosecutor.

But this activity is also very stressful and risky. In May 2021, Neila received a violent video from a user named Frank. “I was shocked and couldn’t stop crying when I saw what was in the video,” she said. Two days later, she alerted the police and Frank was arrested in November of the same year.

Neila said she was abused by a family acquaintance when she was 11 years old. “But I’d rather be the one to suffer with these obscene photos than let them fall into the hands of a child. It’s normal for teenagers to use social media, but it would be unfortunate if the bad guys lurked around. here,” she said.

After three years of operation, the group contributed to 65 arrests, 26 sentences were executed. Including a two-year prison sentence for the abuser.

Homayra Sellier, president of the child abuse NGO Innocence in Danger in Germany, said: “When Moore’s team submits information about a case, we assist with legal proceedings. Their work is very necessary, saving us time, especially with cases involving children.”

Lawyer Nathalie Bucquet, working in Paris (France) said that the difficulty lies in supporting minors when they are abused. In some cases, the children sent their pictures to the bad guys but did not dare to call for help and were easily blackmailed.

“Some other children have a hard time getting out, they feel they can’t share with their parents, making the situation worse,” Bucquet said, adding that she had the support of lawyers. , NGOs and activist groups, but in reality it is very difficult to completely eradicate this evil.

Phuong Minh (According to VICE)