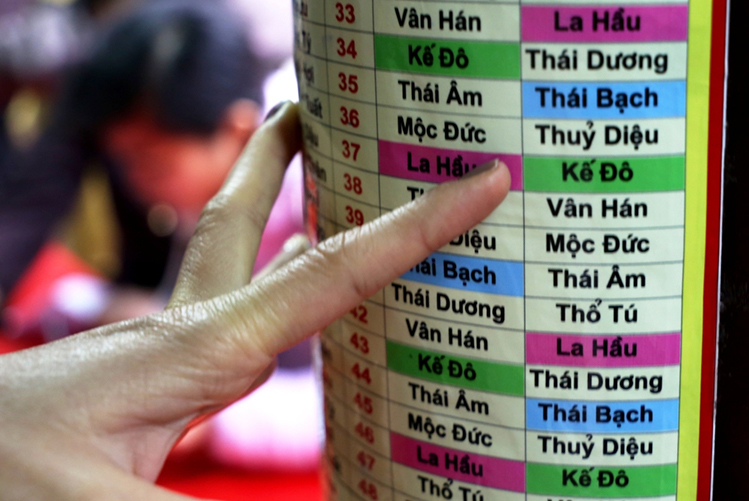 The stars in the first resolution of the year are recorded in the Pham calendar (Indian calendar), similar to the Islamic and solar calendars, called “nine miracles, nine attachments” (nine stars or nine stars).

The nine miracles are combined with the azimuths (to see astronomical and calendar calculation) as follows: Sun in the range of the signs Ox-Dan, Thai Yin in the Dog-Hoi, Van Han in the South (Ping-Wu), Thuy Dieu in the North (Nham-Ty), Moc Duc in the East (Giap-Mow), Thai Bach in the West (Canh-Dau), Tho tu in the middle palace (middle), La Hau in the Southeast (Thin–Thin – Snake), Ke capital in the Southwest (Mui-Than).

Although the names are different, the nine miracles are all understood as nine luminous celestial bodies, closely related to the calendar, astronomy, and the properties of all kinds of matter in the universe.

It should be added that the theory of the Twenty-eighty eighties (28 stars) appeared very early in India, recorded in Buddhist scriptures such as Ma Dang Old (upper book), Great Collection (volume 41), and Tu Dieu (said) above), is used to calculate the date of the year (calendar) or coordinate with the time of birth to predict the good or bad luck of each person.

China’s Theory of the Decalogue is similar, initially used to calculate the calendar, coordinate astronomical viewing; After adding many other factors as the basis for predicting fate in the Horoscope.

It can be seen that the Nine Magic (and the Twenty Eight Tutu) are elements applied in the dharma and astronomical calendar, which are directly related to human life such as earth, water, wind, fire, green trees, and time. weather, climate… Therefore, it is understandable that people deify natural factors, leading to activities of praying and worshiping.

The method of star worship

In Thong Thu and Ngoc Hap Ky (the inscription of the Nguyen Dynasty), there are additional instructions on how to offer a copy of the term release. Bad stars that need to be neutralized include Thai Bach, Tho Tu, Mars (Van Han), La Hau, and Ke Do.

Thai Bach: The five elements belong to the metal, the master of the plague of diseases, men and women are all bad, especially for women. But the noble people (people with fame and positions) meet the year of Thai Bach is a good omen, can increase the population, and have opportunities for promotion. The five stars of the Thai White zodiac signify the great cavalry of marriage.

Tu tu: The five elements belong to the earth, bad in every way. Earth tutu often causes distress, mental panic, insomnia, nightmares; livestock and business are not prosperous; was murdered and scorned by the minor.

Lahore: Owner about the truth, litigation. Men face difficulties in job title, position, study; Women should be careful about love affairs, be careful of bloodshed, maternity…

Capital plan: The owner of the unexpected accident, the negative suggestion, belongs to the ferocious type, both men and women are taboo.

If you want to know which five stars are in your destiny, first calculate your age according to the lunar calendar (our age). If the number of ages is greater than nine, add the digits of age until you get a single-digit number, then look up the corresponding number of stars.

The offering of expired stars should be done by yourself, on the day the stars come to earth (summer) every month. The person performing the ceremony showers cleanly, dresses neatly, sincerely believes in faith, prepares the incense (or tray), buys gifts to conduct the ritual according to the instructions, specifically as follows:

Use colored paper to cut into tablets (rectangular, vertically), clearly write the name on the tablet. Light candles and make offerings such as betel nut water, wine, and fruits. Display incense and tablets in the direction of the falling star, burn incense, and pray to Nom in the direction of the falling star (specify full name, age, address, date and time, offering; sincerely review the mistakes of the village. body, promise to overcome; pray for peace and convenience).

On the monthly date of the star’s birth (lunar day), put candles, write the star’s name (Vietnamese), the direction of the arrangement of incense offerings to the stars is as follows:

Capital plan: Christmas on the 18th. Using yellow paper as a tablet, on the tablet it was written: The genius of the division of Ke Do Tinh Quan. Light 21 candles. Present the incense to the west to make sacrifices.