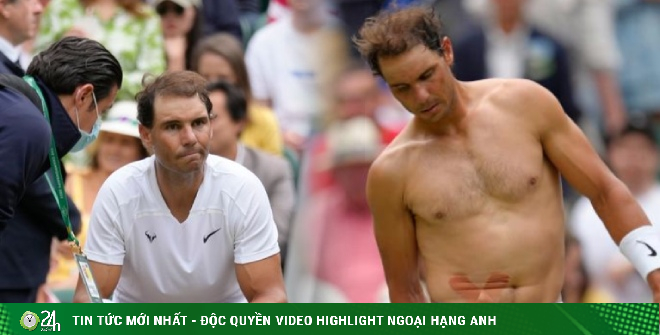 (Sports News – Tennis News) The tennis village was divided after Nadal’s decision to withdraw from the Wimbledon semi-finals, even proposing the idea of ​​giving a replacement spot to defeat General Taylor Fritz.

The tennis village wakes up, calling for Wimbledon to change the rules

Rafael Nadal has just surprised when announcing his withdrawal before the Wimbledon 2022 semi-final against Nick Kyrgios. According to the explanation from the “king of clay”, he broke his abs and had to fight for the past week, but the condition only got worse in the quarter-final against Taylor Fritz. Nadal made the tennis village “shaken up”, even calling for the application of the “lucky loser” rule for the main round of Grand Slam

Nadal’s decision created a heated debate in the tennis industry. In addition to the words of encouragement to share, many comments blamed the Spaniard for trying too hard, leading to a serious transformation injury. At several points during the match, television cameras captured the moment when father Sebastian and sister Maria Isabel signaled him to stop the match.

More importantly, another stream of opinions also suggested giving Taylor Fritz a place in the semi-finals as “lucky losers”, instead of letting Kyrgios automatically win the final ticket. In tennis, the “lucky loser” rule applies only in qualifying (the highest ranked player to lose in the final qualifying round is chosen to replace a player who withdrew before the main round).

New York Times tennis reporter Christopher Clarey is a public supporter of this revolutionary idea: “When a player withdraws at the last minute at a Grand Slam or before the final of a major tournament, the champion loses. should take his place. In this case, Fritz will face Kyrgios as the ‘lucky loser’. The semi-finals will still go on.”

Sharing the same opinion, journalist and commentator Simon Cambers said: “If the organizers know that Nadal is injured, they can ask Fritz to wait. Tickets for Friday tennis at the Center Court are up to 200 pounds, too. much if the audience can only watch one semi-final.”

Commentator Nick McCarvel: “This has been a topic of discussion for a few years, but tennis leaders should really consider applying a ‘lucky loser’ rule in the main round. What does Wimbledon benefit? when Nadal wasn’t in the semi-finals, nothing, and the tennis industry also lost one of the most watchable matches of the year.

If the WTA Finals, ATP Finals give the losers a chance with a round robin format (in the group stage), why is a change not acceptable in other tournaments like Grand Slam?”.

Tennis blogger Lee Abbamonte: “Nadal’s decision to quit is unfortunate but controversial. Tennis needs to apply the ‘lucky loser’ rule to cases like this. Fans, sponsors have spent their money on the semi-finals. In addition, it is unacceptable for a player who does not have to play a semi-final to be able to rest 3 days before the final is unacceptable and unfair to anyone.”

Taylor Fritz refused to replace Nadal in the semi-finals

Amidst the “storm” of public opinion, the main character Taylor Fritz finally spoke up. Responding to a fan’s comment on Instagram, the American tennis player flatly refused the wildcard: “I’m not looking for alms. If I can’t beat Nadal, I don’t deserve to be in the semifinals, singles. It’s that simple!”. Meanwhile, expert Matthew Willis asserts that the “lucky loser” rule should only be considered after Wimbledon 2022: “I still feel confused about the logic behind this rule. How do we know it has any effect. degrade the competitiveness of the league? On the other hand, that seems to be the only solution.”

Jon Wertheim (Sports Illustrated), one of the most famous tennis writers in the world also countered: “What if you bring back a player who has completely failed. In addition to the unfairness, this is not fair. can lead to negative problems”.

Journalist Dan Wolken: “What if Fritz went to the semi-finals as a ‘lucky loser’ and somehow won the championship? We all know he failed in the quarterfinals? , and Wimbledon will become a tournament outside the scope of legality.”