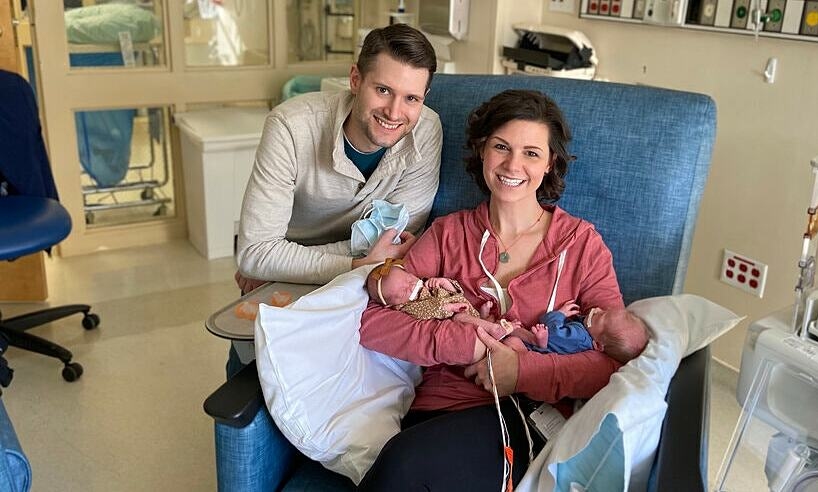 AmericaTammy and Jordan Myers in Michigan had to process two children after being denied parental rights by a judge in Michigan for asking for surrogacy.

The children’s room in the house of Tammy and Jordan Myers is painted gray, white and blue, ready to welcome newborn twins, Eames and Ellison. Corryn, the couple’s eldest daughter, also constantly showed her excitement when becoming an older sister.

However, in order to be recognized by the court as the parents of the twins, the Myers and his wife had to accept the two children as adoptive children, Tammy did not give birth directly while Michigan’s law did not automatically recognize the born children. asking the surrogate to be the legal child of the biological parents. As a result, on the birth certificates of Eames and Ellison, the parents’ part stated the name of the surrogate husband and wife, not Tammy and Jordan.

The judge has twice denied Tammy and Jordan’s request to recognize Eames and Ellison’s parental rights, although an obstetrician claims the twins are the biological children of the Myers family. Even the husband and wife of the surrogate also confirm this.

In order to quickly pick up the children, the Myers and his wife went through the adoption process, including steps such as having the social worker visit home, check the biography and see how to raise the children.

For Jordan, having to prove the ability to adopt a natural child was an insult. “They don’t care that we raised an eight-year-old well,” said the 38-year-old.

In the US, the law of surrogacy varies from state to state. Some states immediately recognize the right of a surrogate parent, but in others, for example, Michigan, it is illegal to knowingly hire a surrogate. Offenders can face up to 5 years in prison and a $ 50,000 fine.

Besides, all agreements between the surrogate and biological parents are “invalid and unenforceable”. This means that anyone in Michigan who has a child through surrogacy must go to the judge to be recognized as a legal parent or to process adoption.

It’s not that Tammy doesn’t want to have children on her own. In 2015, when trying to have a second child, the 39-year-old woman discovered she had breast cancer. She immediately froze the eggs before undergoing many surgeries, which included removal of an uterus and both breasts.

Tammy and Jordan knew that Michigan law would complicate surrogacy. They can go to other states, but geographical distance will affect surrogacy. Not to mention, expensive treatment costs have caused the couple to fall into debt, there is no money to pay tens of thousands of dollars for the surrogate.

Longing for more children, Tammy and Jordan decided to share their stories on social media. Lauren Vermilye, 35, who lives close to home, reads the post and decides to help.

“My wife and I used to tell each other that I was lucky that getting pregnant and giving birth is so easy. It’s unfair that other people aren’t,” Lauren said. She has two children, a boy and a girl, 9 and 6 years old, respectively.

In June 2020, an embryo made from Tammy and Jorden’s eggs was transferred to Lauren’s womb, starting a surrogacy. Since then, Lauren and her husband Jonathan have become close friends with the Myers.

In mid-January 2021, Eames and Ellison were born, 8 weeks earlier than expected, but so far, the Tammy and his wife have not been able to bring their children home. Lauren also argued that the denial of Tammy and Jordan’s parental rights to the twins was “both unfair and unkind”.

“We were really nervous and panicked around the clock. Especially Jordan, I’ve never seen him so depressed and sad,” Tammy said.