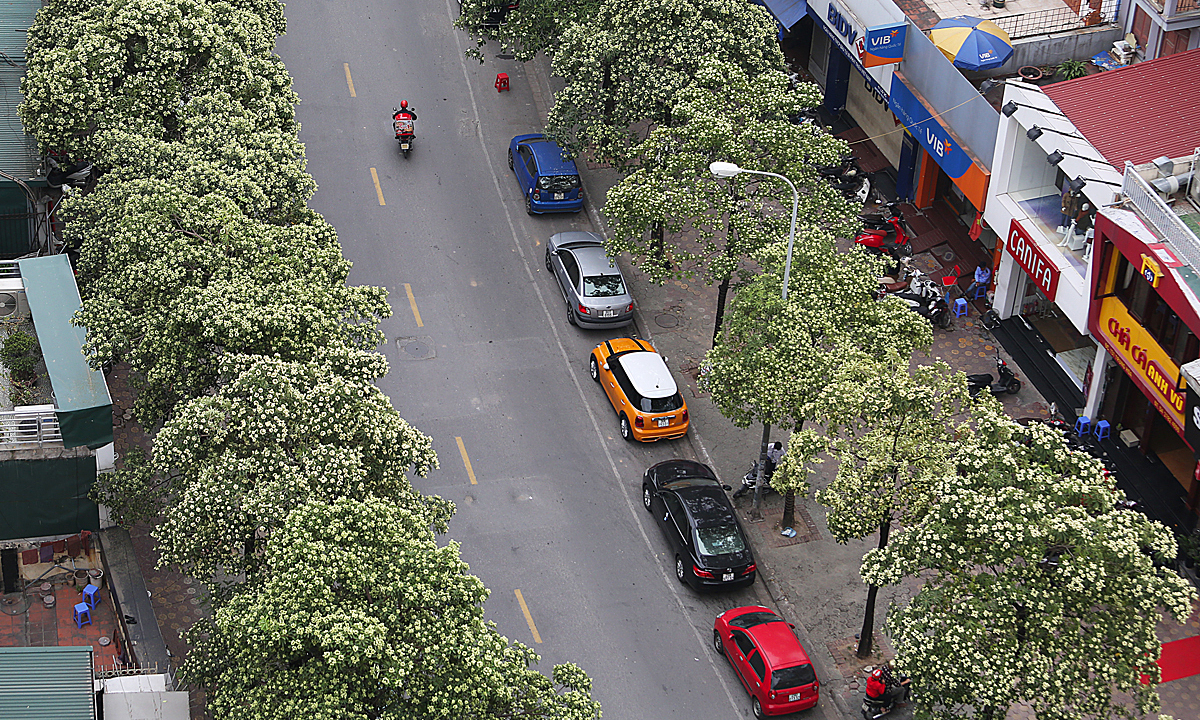 HanoiFor more than a week now, the milkweed tree near her house has been in full bloom, making Mai dizzy and nauseous, forcing her to find a new place to live.

“Even when the door is closed, I still feel the faint smell of milk flowers,” said Huyen Mai, 27, living in Hoang Mai district. When it’s the flower season, she only dares to go out when she goes to work.

From the day she arrived in Hanoi, Mai clearly felt the passion of milk flowers every autumn. Seeing the green flower clusters on the canopy turn ivory white, she shivered, just waiting for heavy rain to make the flowers fall off. “It sounds selfish, but I can’t stand the smell,” she confided.

In 2019, Mai came to stay on Dinh Cong Thuong Street for convenience on her way to work. In the previous moves, she always noticed the trees around, but this time Mai left the milk flower tree near her house. Last year there was no flower season, but this year everything has changed.

Two months into a friend’s house because of the epidemic, Mai was almost shocked when she returned to her room. “The milk flower tree is about 50 meters from the house, but it smells so good,” she said.

Twice a day going to work through Bui Xuong Trach, Vu Tong Phan and then Nguyen Xien, Mai tightly covered her mask, drove quickly when she felt the smell of milk flowers rushing up her nose. On the nearly 4 km journey from home to work, her sense of smell was constantly tortured.

“The later it is, the stronger the scent of flowers,” Mai said. Returning to the room, she quickly turned on the air conditioner and used essential oils to mask the smell. It’s cold in autumn, sometimes she wants to open the door to the room, but just open the door and smell the smell, Mai hastily closes it.

Having a vestibular disorder, being tired when she had to work overtime and constantly inhaling the smell of milk flowers every night after work made her tired. After many days of insomnia, the feeling of headache, dizziness, and nausea increased, forcing Mai to find a new place to stay.

“Are there any milkweed plants near my house?” Mai asked the innkeeper when contacting to see the new room. Through 4-5 places but not satisfied, the 27-year-old girl continued to search.

When she learned that Mai intended to check out because of the smell of milk flowers, many friends said she was “doing too much”. But according to experts, symptoms of headache, dizziness, nausea when smelling Mai’s milk flower are common. “This is a symptom of people with allergies, sensitive reactions when the smell of flowers is too strong. Although not everyone inhales it like that”, physician Vu Quoc Trung, a member of the Hanoi Oriental Medicine Association said.

According to herbalists, people who are easily allergic to the smell of milk flowers, if they smell a lot, can cause coughing, asthma, rashes, headaches, dizziness, dizziness, nausea, bad effects on health. . Milk pollen easily causes the elderly, young children allergic rhinitis, bronchitis. People with a history of asthma, sinusitis is more persistent.

“Particularly in cases of severe allergies, contact with flower scents should be avoided as much as possible,” Trung said.

Not to the point of having to move, but Ha An, 30, in Bac Tu Liem district, is also stunned every time it is flower season. An described the feeling of suffocation, the strong smell of black scalding straight up her nose every time she passed a tree, making her haunting. Especially for people with allergic rhinitis like An, the flower scent is too strong to cause prolonged sneezing and fatigue.

Surveyed on the streets of Duy Tan, Trung Kinh, Trung Hoa, Nguyen Chi Thanh, Tran Duy Hung, Vu Tong Phan… most of the milk flower shops began to bloom. Flowering season starts at the end of September and lasts until about early December. The closer to the end of the season, the stronger the scent of milk flowers.

The smell of milk flowers negatively affects the lives of many people in the capital. In a survey on VnExpress In December 2017, 66% said they were uncomfortable walking on streets full of milk flowers. At the end of 2018, at the meeting with voters in Tay Ho district, people petitioned the city government to move milk flower trees on Trich Sai street, Buoi ward. At the end of June 2019, nearly 100 trees on this street were transferred to the Nam Son landfill area (Soc Son district).

Contrary to Mai, An, Nguyen Trien, 27 years old, living in Nam Tu Liem district is fascinated every time the flower season comes. “I’m addicted to the smell of milk flowers. The closer I get, the more I like it,” he said. Trien even picked some branches and put them in the room.

Admitting to love Hanoi because he loves the smell of milk flowers, taking advantage of his free time, Trien often runs along Le Quang Dao, Me Tri or Ton That Thuyet streets to enjoy the scent of flowers. He described the feeling of inhaling the cool scent of milk flowers mixed with the chill of early autumn morning, and his soul was unusually relaxed.

Like Trien, Ms. Luu Phuong Thao, 40 years old, in West Lake is also addicted to the scent of milk flowers. On the evening of October 7, on the way home, she asked for some flowers to put in the living room. “There are 3 trees near my house, I have to go to the balcony every night to inhale. It’s also very pleasant to wake up in the morning to smell the flowers in the room,” she said. But the other members avoid it out of fear.

As for Mai, she hopes to find a new room soon. The place that is not covered by milk flowers is about to bloom.