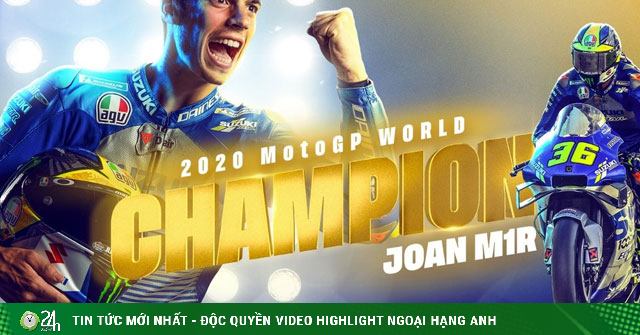 (Sports news, MotoGP racing news) Entering the penultimate race with a distance of 37 points with the following competitors, Joan Mir does not need to take risks and only needs to maintain the form he has shown in the past races. at the main race. And with the remaining candidates unable to play well at the Valencia GP, the # 36 young driver has officially fulfilled his dream and set foot in the “temple” of the MotoGP champions.

The three remaining champions this season, Joan Mir (12th), Fabio Quartararo (11) and Alex Rins (14), respectively, have modest starting positions in the second race in Valencia. Therefore, Quartararo and Rins need to work 100% of their ability and win to close the gap with Mir in the standings. However, everything ended with Quartararo right from the first round when he made a mistake and ran out of the track in the third corner. After a few laps he officially gave up after the sled and “goodbye” was always empty. MotoGP 2020 enemy.

Rins meanwhile kept his composure, ran steadily, and gradually improved his race rank. However, 4th place is the highest rank that driver # 42 can do in this race when the distance with the group of riders above is difficult to level. In the first group, the driver won the pole, Franco Morbidelli and Jack Miller (Pramac Ducati) are the two names competing for this race victory. Morbidelli shows high stability but the # 43 Australian handlebar behind has aspirations to be the 10th driver to win this season.

Miller showed all he could do in the last 2 laps, even rising in the 1 and 3 corners in the decisive round, but with a cold head, the steering wheel of the Petronas SRT was defiantly defensive. To maintain 1st place. Since then, Morbidelli has excellently got the 3rd win of the season (the most among the racers this year) and rose to 2nd on the individual rankings with the advantage of 4 points compared to Rins. Miller pityed on second but won his third podium this season, the first since the Styrian GP. Morbidelli and Miller competed for victory to the last meter

Pol Espargaro was close to the top 2 in the early part of the race but was out of breath afterwards. He was even overtaken by Takaaki Nakagami (LCR Honda), but the Japanese driver missed the track at that moment. That is why the handlebars of Red Bull KTM preserve the third and second podium position in a row in Valencia.

Joan Mir started 12th and stood before the historic moment, the 23-year-old young driver showed his calm, running not too fiercely, making full use of the opportunities he had to finish 7th, a city Accumulated enough for him to officially crown the individual title of the MotoGP format in 2020. At Moto3, after 4 podiums since the start of the season, Tony Arbolino finally got his first win since Dutch TT 2019 last June. And it came at a crucial moment to help him close the gap with leader Albert Arenas, who finished fourth in this stage, to just 11 points and bring the Moto3 championship battle to the decisive race at Portimão. , Portugal. Ai Ogura is only eight and eight points behind Arenas in second place. Sergio Garcia and Raul Fernandez have won podium in this stage. An emotional championship for Mir and Suzuki

Meanwhile at Moto2, the championship is unknown as Enea Bastianini is only sixth, but has a 14 point advantage in the final stage when Sam Lowes only finishes 14. Fabio Di Giannantonio drops the victory. although leading in the final round, handing the title back to Jorge Martin, the first since the Austrian GP. The duo of Sky VR46, Luca Marini and Marco Bezzecchi have only a slim chance when they are 18 and 23 points behind Bastianini, respectively. Hector Garzo had first podium at Moto2 with 2nd place. 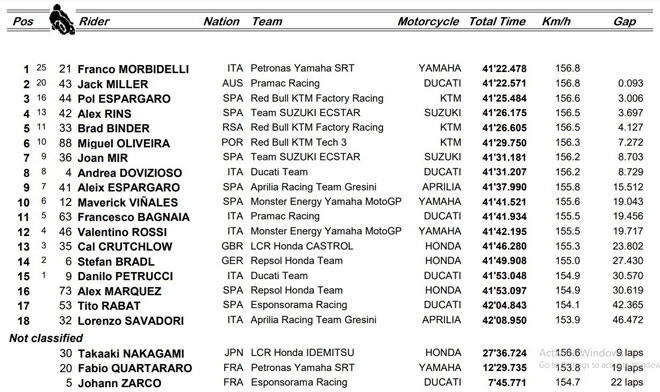 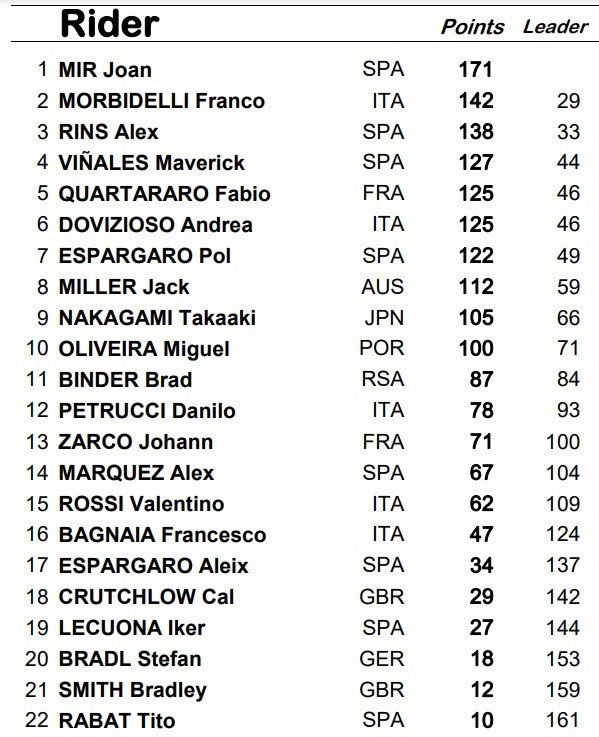