(MotoGP racing news) Sachsenring in the past decade has always been a racetrack that brought many good omens for former champion Marc Marquez when he won all of the last 10 races.

Moto3: Add a classy performance from rookie #37, widening the gap to 2 wins

Starting from the pit-lane in Doha, 8th in Portimão, and 13th in Jerez, that was the starting position of the races that rookie Acosta won in total.

In this race at Sachsenring, he once again started in 13th place and had another classy performance. He soon rose to the top 4 after only 4 rounds and remained in the leading group. His main opponents continue to be Dennis Foggia and Sergio Garcia, who are at the top of the individual rankings.

However, with excellent tactics, plus luck, Acosta got the final victory, also the 4th time he was crowned at Moto3 this year. Thanks to that, he increased the distance with the second-ranked driver (Garcia) to 55 points after stage 8.

Kaito Toba, who started 5th, finished 2nd and won his 3rd podium for the first time since Teruel GP 2020 (at Aragon). Jeremy Alcoba finished 3rd but was fined 1 place for not complying with the penalty for running over the track limit. So the final podium place went to Foggia, who took the lead in 15/27 laps of the race.

* Moto2: Rookie made his first mistake, Gardner got a hat-trick

Rookie Raul Fernandez has won the pole for the 3rd time and the 6th stage started in the first row of his Moto2 career. His teammate Remy Gardner started 3rd and again in 2021 the race was played without a rival to the Red Bull duo KTM Ajo.

In the 4th round, though, when Gardner, now in the lead, and Fernandez had created a gap of nearly 3 seconds to the chasing group, rookie #25 made the first mistake of his Moto2 career that caused him to give up in the race. German GP and open the door to victory for teammates. 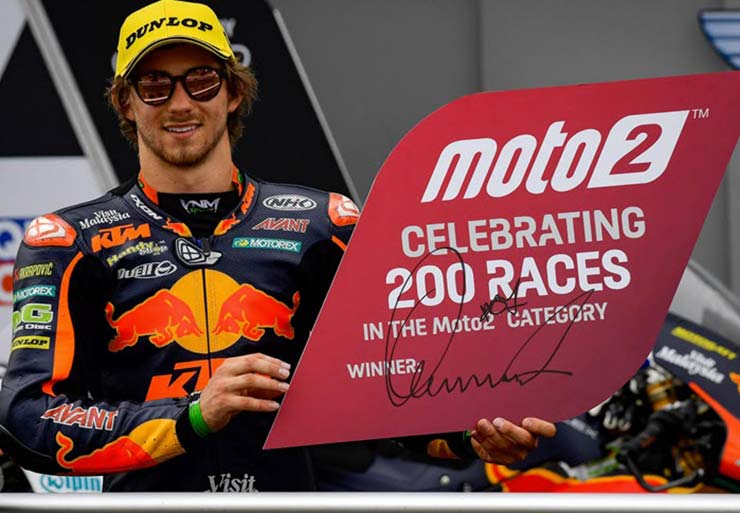 From there, Australian driver #87 made no mistake to finish first with a gap of more than 6 seconds to the next steering wheel. He has a hat-trick of consecutive victories (a record at Moto2 for an Australian driver) to create a 36-point gap over Fernandez on the individual rankings.

Aron Canet started 10th at Sachsenring, but he excelled in 2nd place overall, getting 2nd podium in 2021 as well as his Moto2 career. Meanwhile, Marco Bezzecchi won the last podium place, the third time in the last four races he finished third.

Fabio Quartararo is in “destructive” form on day 7 with 5 consecutive poles ahead of the German GP race. This streak of achievements was ended by compatriot, also this year’s championship competitor of Yamaha driver, Johann Zarco.

Pramac Ducati’s steering wheel has had the 6th pole in MotoGP format, for the first time since the Czech GP 2020 stage, with a record only faster than Quartararo in 2nd place by exactly 0.011s. However, the steering wheel duo from France are not the main characters in this race.

Aleix Espargaro (Aprilia) as usual had a good departure and this time he took the lead in round 1. But he did not hold that position for long before an old name, an “expert” in The Sachsenring racecourse has risen.

Former champion Marc Marquez has won here for the past 10 years in all competitions, and he has a chance to defend that undefeated record, although he hasn’t been in his best form since returning earlier this year.

He rose to No. 1 right at the end of round 1 and started to accelerate since then. In the 9th round, suddenly the distance between the handlebar #93 and the rear group exceeded more than 1s because A.Espargaro slowed down, making the rear drivers also at a disadvantage.

At this time, raindrops began to fall on the Sachsenring track, but did not affect the race. Miguel Oliveira (KTM) after the victory in Catalunya continues to show a high performance. Starting at 6th place, he rose to 2nd in round 11 and started “chasing” the leading #93 car. The KTM was weak against the Honda in the first two sectors of the lap, but was significantly faster in the last two sectors. That helps Oliveira to shorten the distance with Marquez by more than 0.1s through each round.

When the race had only 4 laps left, the gap was less than 1s, but at this moment, the Portuguese driver had no more tires to attack and had to accept 2nd place in the end, also the second stage. 3 in a row he was in the top 2.

Marquez shows great determination and speed, he has stability through each round and does not make any big mistakes. Thanks to that, after 581 days of waiting since Valencia GP 2019, Repsol Honda’s #93 driver has returned to the top of MotoGP with his 11th consecutive victory at German GP, ​​8th consecutive time in MotoGP format alone.

This feat will help the Spaniard to be much more confident after a poor start since returning from injury in July last year. The joy of winning is back with #93

Quartararo has a not-so-remarkable race but can still finish 3rd to win the 5th podium in 2021 and regain the advantage of points lost in the previous stage. Driver #20 is now more than Zarco, who finished 8th, 22 points after 8th stage.

KTM continued to have an excellent race when Brad Binder from the 13th starting position finished 4th. The Ducati factory duo finished in the next 2 places, Francesco Bagnaia started 10th, dropped to 16th in the tournament. round 4 but returned to the 5th finish, before teammate Jack Miller.

After the German GP, ​​Assen, the Netherlands, which is known as the “temple” of speed, will have a comeback from 2019 next weekend, from June 25 to 27. 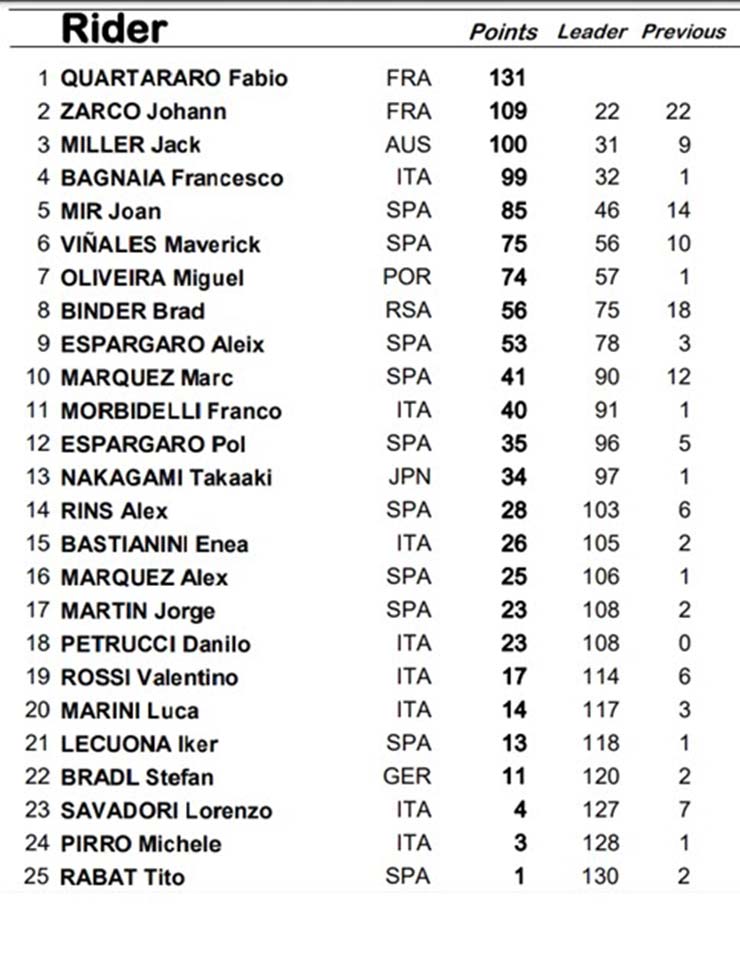 (MotoGP Racing News) With the race results in 2020 and what has been shown in the first two days of racing, all are expected to…